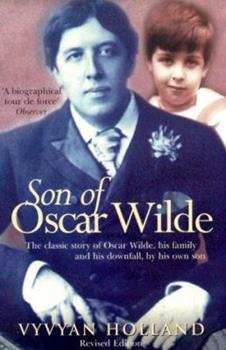 With its thirty-three previously unpublished Oscar Wilde letters and its poignant recollections of a man as spontaneous, humane, and sincere as he was prodigiously witty, Vyvyan Holland's memoir of his famous father has come to be regarded as a biographical classic in Wildean studies. Sharply observed, vivid, and dispassionate, it offers not only an unforgettable portrait of Wilde himself, his circle of friends, and his band of persecutors, but also...

Published by Thriftbooks.com User , 12 years ago
I was interested in this book beecause I was curious of how Oscar Wilde son had lived the consequences of the happenings which envolved his father. His description of his life (and of the rest of the family) and of how he felt all that happened is amazing and very interesting. I have read this book in a moment! Really It worths the price.

Published by Thriftbooks.com User , 13 years ago
I love this book. When I read it, I feel as if his son is in my living room telling me stories of the old days. It is written very honestly and colloquial, so that you can really go through it. And yet, the Europe at the early part of the century - it is different. This is a chance to read something and feel like the author is with you and telling you about himself and his family. Very sad in parts, but vivid, and at no time written to be a victim's story. Very good.

A TRUER VIEW OF WILDE: THE SON WE BARELY NEW

Published by Thriftbooks.com User , 15 years ago
the Empire painted WIlde a degenerate, a scapegoat sacrificed for its own corruption and sins. THis book, written by his surviving son, with emendations and commentary and suggestions by his grandson, reveals the true Wilde, who early loved his sons and whose greatest loss in his pillorying by the EMpire was his family. Wilde is not the painted savant fruit he is pictured, but a true family man, a true nationalist Irishman (to know Wilde, know his mother), and a truly gentle genius. TO read this book is hear again the epic tale of sons in search of their lost father. In this case Telemachus never again sees Odysseus, and the aching yearning between father and son oozes gently from these pages like an embarrased fatal wound. THe greatest artistic work, and the most grecian tragic, as Wilde predicted, became his own life. TO understand WIlde, please read this book. What wonders of literature this talented son might have produced, besides his remarkable translations from the French, etc., had this gifted family remained intact, and even at home with Lady Wilde in Dublin. Perhaps Wilde's second son would never have died for the EMpire at war. But such musings lead to the despairing madness which ultimately tempted Oscar upon his early deathbed. Essential for any and all student and reader of Mr. Wilde. A universal legend of filial affection in its own right, as cross generational as any Garcia MArquez work. BEautifully written.

The Intriguing Perspective of Being Oscar's Child

Published by Thriftbooks.com User , 16 years ago
As an Oscar Wilde fanatic (I have read literally everything ever written by/about him) I was drawn to this book because of the new perspective about him that was offered: that of his child. Not only is it interesting to read about his Vyvyan's memories about him, but the biography is written in such a vivid way that one can actually feel the pain Oscar's son goes through when his father is sentenced to prison and when he dies. This is a must read for an Oscar Wilde fan interested in gaining a new perspective on the legendary writer...it is the closest one will ever be to understanding what it was like being in his family.

Son of Oscar Wilde Mentions in Our Blog

Drink Your Books in These 9 Literary-Themed Bars
Published by Beth Clark • February 08, 2019
Literary-themed bars across the US beg the question: Are you really alone if you're with the spirit(s) of your favorite authors or books? We don't think so. (And we're betting you've taken a book into a bar before.) Below are 9 establishments bookworms can drink their books in or even borrow one from the bar's library to read while sipping a cocktail.
Read Article
Trustpilot
Copyright © 2022 Thriftbooks.com Terms of Use | Privacy Policy | Do Not Sell My Personal Information | Accessibility Statement
ThriftBooks® and the ThriftBooks® logo are registered trademarks of Thrift Books Global, LLC