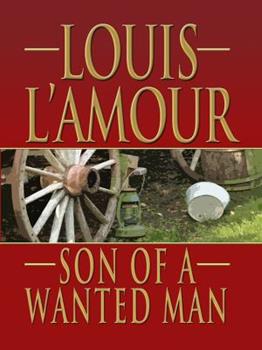 This description may be from another edition of this product. An outlaw's legacy... In a remote corner of Utah lies the secret outlaw kingdom of Ben Curry. For fifteen years Curry has ruled supreme, as his men have pulled jobs from Canada to Mexico. But the king...

A good story plus an interview

Published by Thriftbooks.com User , 14 years ago
I was priviledged to receive a pre production copy of this from Beau l'Amour and that satisfied me. I did however also get a final published copy and this excelled all expectations. Don't expect a direct transcript of the novel because this treatment like any adaptation has to be varied to enable the story to be told in the new format. The essence of the novel has been maintained and the story moves quickly in the manner of "Old time Radio dramas" The added bonus in this is CD three containing a "Making of" section where Beau L'Amour and his Technical Producer explain the process and the technical issues involved in the creation of this 2 CD production. This is then followed with a 30 minute fireside chat by Louis L'Amour himself. This is a must for any L'Amour fan.

If You Like Audio Books or Radio Drama - You'll LOVE This!

Published by Thriftbooks.com User , 16 years ago
Louis L'Amour's "Son of a Wanted Man" is an outstanding production on EVERY level. I have listened to all types of audio books and radio dramas and this is my absolute favorite. While the Publishers Weekly reviewer got caught up in the technology he completely missed what are IMHO some of the best performances I've ever heard! I began to believe that these characters were real and completely lost myself in the story and drama! The music was highly apporopriate both to the period and style of the show and added a deep sense of emotion without being distracting. I'm not alone in my liking for this production. Jeff Davis from Audio Books Today says "The narration is done by Terrance Mann and is perfectly suited for this tale. Though his voice is not the usual raspy, western drawl you often hear with stories of the old west, his innocuous voice blends superbly with the story and sound effects. The transitional music also carries the story along with its vast, country feel. " Son of a Wanted Man is listed as one of the TOP 10 by The Detroit News Entertainment Insider. Library Bookwatch says "Fans of Westerns will relish Louis L'Amour's Son Of A Wanted Man." In fact, nearly every review I have read seems to think this is an outstanding production worthy of a listen and I think its a bargain at its lower than usual price!

Raised to be the new leader of the outlaws

Published by Thriftbooks.com User , 17 years ago
"Son of a Wanted Man," by Louis L'Amour, was first published in 1984. Louis L'Amour is most known for his excellent Westerns, and this novel is no exception. The book is filled with gunfights, pursuits, and a little bit of romance as well.Ben Curry was the mastermind of well-planed robberies from Canada to Mexico and from San Antone to Los Angeles. Because the robberies were so well planed, almost no clues were left behind. Tyrel Sackett and Borden Chantry begin to look deeper into these robberies and piece together the clues, because Sackett's town was recently robbed. Ben Curry also planned ahead for his own retirement by raising an orphaned boy, Mike Bastian, as his son. Curry wanted Mike to take leadership of the outlaws, now that he felt Mike was ready. But did Mike want to follow in his foster father's footsteps? And to make matters worse for Mike, several of the outlaws didn't like the idea and would rather become the leader. With Sackett and Chantry looking into their activities, there is plenty of suspense and action in this book.

Trained well by outlaws, he must now choose his own fate.

Published by Thriftbooks.com User , 23 years ago
He has been trained by the best. He can track, shoot, and more importantly, he can think. He's been raised to take over his father's gang of hundreds of outlaws stretching all over the country. But he must now decide if that is the life he wishes to lead. In the meantime there's disention in the ranks, a pair of wise lawmen on the gang's trail, and a woman with the fire of a stallion eating away at his heart. All this and more will face the son of a wanted man. It was a terrific story that keeps moving until the final page. I loved it. The story has everything that you look for in a Louis L'Amour book.
Copyright © 2020 Thriftbooks.com Terms of Use | Privacy Policy | Do Not Sell My Personal Information | Accessibility Statement
ThriftBooks® and the ThriftBooks® logo are registered trademarks of Thrift Books Global, LLC