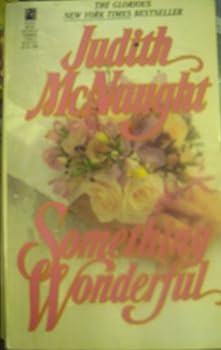 (Book #2 in the Sequels Series)

This description may be from another edition of this product. Bestselling author Judith McNaught masterfully portrays a remarkable heroine, and an unforgettable passion, in this powerfully moving love story -- one of her most beloved novels of all time The...

Doesn’t quite make it.

Published by Anne Grime , 1 year ago
Despite entertaining narrative and witty dialogue this book falls short in a way common to several other Mcnaught books. A super leading lady, smart, independent, principled, is treated abysmally by leading man. Then, because he is good looking and/or experienced, she just falls at his feet and becomes a total ninny, instead of exacting some retribution. Irritating!

A Book that Lives Up To Its Name

Published by Thriftbooks.com User , 19 years ago
I loved Jordan and Alex's story. It is so touching and wonderful. The power of love is an amazing thing and is shown in this story. If you have never read McNaught this is a great first story. I have re-purchased this book twice since I wear them out re-reading them. In fact this story gets better with each re-reading.Alex is a young girl that still believes their is good in everyone including her selfish family. Jordan is a disolutioned soul who find nothing good in anyone. One chance meeting and Alex in the role of unlikely heroine saves Jordan. He takes her home to her unusual family and is dismayed to see how she lives. Still Jordan has made himself a promise and that is to always keep himself on guard against those that would only take from him. Alex teaches Jordan that not everyone is out to get something from him. He is slowly learning this when tragedy happens and he is taken away from Alex. What follows is the growing up of one young girl, and the faith that she inspired in a tired soul (Jordan) as a way of motivating Jordan to get back to her.A must read if you are a McNaught fan, and it is a great first read if you have never read McNaught before. This is classic McNaught at her best.

Published by Thriftbooks.com User , 20 years ago
Once again, this is one of my favorite Judith McNaught book!Jordan, the rich & powerful Duke of Hawthorne, known also as a handsome rake was travelling to the countryside where his mother is staying when he met trouble in the highway. A knight in a rusty armour came to his rescue. When the person in the armour suit, who he assumed was a young boy, was knocked unconscious in the process of saving his life, he had to make sure he would be ok, returned to his family & be well compensated. Therefore, in good intention, he carried the boy to the nearest motel. When Jordan took off the armour suit & clothes to check for any open wound, he realized that the boy he thought was actually a young girl. Alexandra was already half naked & half conscious when the hotel hostess came inside the bedroom. That good intentions turned into a black cloud which created a scandal in Alexandra's small town, ruining her reputation & her chance of finding a decent husband, which infuriated her mother. Since Alexandra's family were impoverished when her father died, her mother took this opportunity to better their situation. Forced to marry each other, their life changed forever....Even if she wasn't ready to marry, Alexandra found herself already half in love with Jordan. On the other hand, Jordan who have no intentions of marrying, let alone falling in love, decided to wed Alexandra. Afterall, he owed her for saving his life. However, What Alexandra's unaware of is he plans to leave her in one of his estates, fully financially compensated, including her mother and only to be visited once or twice a year for show. He intended to live his life just the way he was before he got himself in this mess. Alexandra Lawrence was a tomboyish, innocent, naive young country girl when Jordan first met her. She was so naive that she was so unpretentious with her emotions. She speaks her mind and shows her emotions freely. She was romantic & full of imaginations. She's overwhelming & she amazes him as well. She was totally different compared to the Ladies Jordan is use to being with. But before Jordan can see Alexandra flourished into a beautiful Swan, he got himself into another trouble. This time, Alexandra wasn't there to rescue him... When Alexandra was initially introduce to the Ton, She acknowledge her love for Jordan which made her the laughing stock of the Ton. She didn't know the true character of Jordan. She always believed him to be good hearted, a gentlemen & a sensitive person. However, as she matures, what she eventually heard and found out was an exact opposite. She is no longer the naive country girl who Jordan played like a fool. That's when she decided to be the Belle of every Ball. She stopped sulking, came out, enjoyed herself immensely & became every man's desire. This book have so many twists & turns that just makes you want to read it until it ends. Aside from the suspense of finding who wants to kill Jordan, Al

Published by Thriftbooks.com User , 21 years ago
In my opinion, the best Judith McNaught book I have ever read. Set in England in the early 19th century, young Alexandra Lawrence meets the handsome Duke of Hawthorne and sets in motion a story that will make you laugh and cry, as is Ms. McNaught's specialty. The young Alex marries the cold-hearted Jordan, her heart filled with love and admiration. Tragedy strikes, tearing the two apart, only to meet again when the awkward duchess has bloomed into a beautiful, sophisticated young woman. I've read this book cover to cover about four times and each time I discover something more magical about this wonderful couple created by romance author, Judith McNaught. It's an intelligent, witty, passionate, romantic, funny, and heart-warming story of a young girl who believed in "something wonderful."
Copyright © 2020 Thriftbooks.com Terms of Use | Privacy Policy | Do Not Sell My Personal Information | Accessibility Statement
ThriftBooks® and the ThriftBooks® logo are registered trademarks of Thrift Books Global, LLC