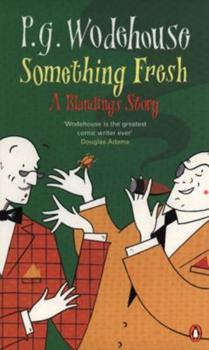 (Book #1 in the Blandings Castle Series)

We receive 11 copies every 6 months.

The one thing that could be expected to disturb the peace of life at Blandings is the constant incursion of imposters. Blandings has imposters like other houses have mice. On this particular occasion there are two of them - both intent on a dangerous enterprise.

Published by Thriftbooks.com User , 13 years ago
Swine flu or the recession got you down? Are you pinned against the ropes? Have you got the blues? Melancholia got you in its grip? Worried that Obama may not be able to get your brother-in-law the job running US Steel and thus off your couch? .... Fear not! The cry goes out: P.G. Wodehouse to the rescue! There is nothing like a good Wodehouse read to cheer one up, not a pill, not a drink, not a men or women - just Wodehouse! Wodehouse is what the doctor ordered to tickle you in the funny bone and get a smile going on the old face. This wonderful Wodehouse novel once again takes place among the drafty halls of Blandings Castle, where our poor main character will try to make "something new" of himself by stealing a rare Egyptian jewel bug -the ensuing amusing caper throughout Blandings is totally hilarious! One loud laugh after anther! A Wodehouse masterpiece! If you love Monty Python, Faulty Towers, Jeeves and Woster, Stephen Fry, Hugh Laurie, and other witty British Comedies, you'll love this great Wodehouse work. The writing, plot, wit, and word play is spot on. This is timeless stuff. And can I add terrific? This is laugh out loud funny. I adored every moment!

Wodehouse is perhaps the best antidote for depression!

Published by Thriftbooks.com User , 13 years ago
As far as I'm concerned, PG Wodehouse this is the best comic authors ever. It's understandable that Stephen Fry, Douglass Adams, and Hugh Laurie all praise him. In each of his books he brings a smile, a laugh, or even a giggle out loud. This was British comedy before Python, (and while different, the use of wit, satire, etc, makes Wodehouse a master). I used to read this book in university, pretending to listen to some lecture. These great literary treasures need to be discovered again by a new generation. Pass this book to someone who has never heard of Jeeves, Wooster, Psmith, Ukridge, Blandings, or Sally. Make any day better with a enthusiastic portion of Wodehouse's light-hearted legendary fun. Enjoy! Something New is set in drafty halls of Blandings Castle - so you know fun is in store! Half -wits and nit-wits are after a bug of value! Basically it's a simple and easy choice for you, if you like one Wodehouse story you're going to like them all. In these economically bleak times its good to invest in a book that will bring happiness to all who read it. Enjoy the hilarious works of Wodehouse - perhaps just what you need!

Something New for Wodehouse fans!

Published by Thriftbooks.com User , 13 years ago
The first time I heard of P.G. Wodehouse was watching the wonderful Stephen Fry and Hugh Laurie (better known from "Black Adder" and "House") TV series "Jeeves and Wooster". That series put me on to reading as much as I could from this great writer. This magnificent Wodehouse story follows Mr. Ashe Marson into the drafty halls of Blandings Castle, where he will try to make "something new" of his life by stealing a rare Egyptian scarab - all for the best of intentions. The ensuing amusing romp through a stately English country home introduces other characters who recur throughout the Blandings Castle stories. Simply put, if you like one Wodehouse story you're going to like them all. Much of this can be explained by Wodehouse's mastery of the language and constant deft turns of phrase, period slang, and comic timing. During these times the pleasant but hilarious works of Wodehouse are just what we need!

Published by Thriftbooks.com User , 20 years ago
This is the first Blandings Castle novel, and the first novel in what we now think as the true P.G. Wodehouse style. For the first time, the interplay between absent-minded peers, quick-to-anger relatives and friends, and those amazing good-natured yet good-for-nothing younger sons come together in a comic dance of quick assumptions, identity switches, flirts with embarrassment, and, oh yes, love.If Wodehouse wasn't so widely admired by the critics, I would have to claim him as a guilty pleasure. Although I can quote style and form with the best of them, the real truth is that I read Wodehouse because he amuses. In Wodehouse's hands, the sly wink equals the over-the-top exaggeration, and only one will work in the place that he puts it.I tried to slow my reading speed down on this book, to gain an understanding of the flow and the way the language worked. I failed miserably--before I realized it, I was caught up once again in the action of the story and I wasn't observing but enjoying. I'm thinking that to truly study a novel, I am going to have to force myself to retype it.

Published by Thriftbooks.com User , 20 years ago
Something Fresh is the first book of the Blandings Castle series, and in my opinion, the best. It is about a person named Lord Emsworth who accidentally steals a millionaire's scarab. The millionaire also happens to be his son's future father-in-law. The millionaire hires a man to find it, while the man's friend also gets information on the scarab. So both try to steal, while the Lord Emsworth's secretary, not knowing that it is the millionaire's, tries to prevent them from recovering the scarab. The encounters between the man,his girl friend, and the secretary will keep you laughing. Not only I, but also other people, who have read this book after I recommended it, share the view that Something Fresh is an extraordinary book. Get your hands on this book as fast as you can, and soon you will be famished for more books by P.G. Wodehouse. It will, and I am totally serious here, make you laugh until you have laughed all the laughs you can laugh, and cried all the tears you can cry. Hope you enjoy!!!! Cheers!!!!! : )
Trustpilot
Copyright © 2022 Thriftbooks.com Terms of Use | Privacy Policy | Do Not Sell My Personal Information | Cookie Preferences | Accessibility Statement
ThriftBooks® and the ThriftBooks® logo are registered trademarks of Thrift Books Global, LLC