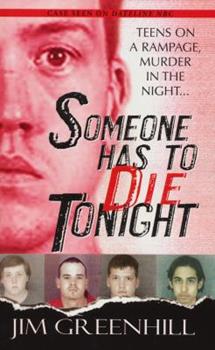 Someone Has To Die Tonight

Lords Of Chaos It was big news in Ft. Myers, Florida when an abandoned historic building was destroyed by vandals in a spectacular blast. Behind it lay the Lords of Chaos, a band of teenage misfits led by Kevin Foster, 18, a vicious hatemonger who idolized Oklahoma City bomber Timothy McVeigh and was known as "God" to his five-man gang. Vortex Of Violence The explosion was only one episode in a month-long crime spree that began with vandalism and...

Published by Thriftbooks.com User , 16 years ago
This is a great true crime book, written in an unusual style, packed with incredible detail. It reads almost like a fiction thriller. The part that takes the reader thru the night of the murder, moment by moment, is absolutely riveting, edge-of-your-seat suspense. The portrait of alienated youth that it presents is quite disturbing and frightening. There is so much detail, it puts the reader right there in southern Florida with the "gang" called the Lords Of Chaos as they vandalize and rob for kicks, escalating rapidly into homicide. as the story unfolds. The author uses a style of writing that is fragmented, choppy and more prevelant in fiction. I've read 100's of true crime books, but never one written in this way. His sentence fragments may put you off at first, but its a good technique for moving the story along very fast. This is one of those books that is very difficult to put down until you are finished, a real page-turner. I look forward to more books from this writer---he seems to be a major new talent on the true-crime scene.

Some Has to Die Tonight

Published by Thriftbooks.com User , 16 years ago
Jim Greenhill's topnotch investigative writing is clearly visible in his true crime Someone Has to Die Tonight. While the story will chill the reader to the core, Greenhill's crisp writing and detailed characterization of each member of The Lords of Chaos will hold everyone's interest until the last page. The story chronicles how one teenage boy is able to control other seemingly normal boys to the point of committing crimes that escalate from pranks to murder. It is a wake up call for all of us who naively believe such things can't happen in our community. For those interested in true crime and psychological thrillers, Greenhill's book can't be beat. Tekla Dennison Miller, author, Durango, CO

A triumph of research and deft storytelling

Published by Thriftbooks.com User , 16 years ago
The story is enough to invoke chills, but combine that with Greenhill's masterful storytelling and I wanted to leave the light on before hitting the pillow. Exhaustively researched and told in a compelling narrative reconstruction, this is a definitive account of the world of juvenile crime that predates, but likely foreshadows the Columbine Massacre. A newspaper journalist by trade, Greenhill brings a reporter's knowledge to a book that transcends mere reportial accounting with it's flare and seemless prose. True-crime buffs and anyone interested in learning the genesis of teen angst lurking in the hallways of schools across America should buy this book.

Published by Thriftbooks.com User , 16 years ago
Usually, all of the focus goes on the criminal mastermind, but in "Someone Has to Die Tonight," thoroughly constructed profiles of all the LOC members illustrate anyone can fall into peer pressure and an escalating criminal record-nerds, musicians, artists, athletes, future air force material, mathletes, the dependable kids who work double shifts on weekends, popular kids, unpopular kids. Nobody's immune. I recommend this book to parents, who should ask themselves the questions the jury foreman posed. ("What are my kids doing? Who're they hanging out with? Where are they? Who're their friends' parents?") Many parents assume they know the answers; their children would never act like these boys. But that's exactly the sort of retort given by the gang leader's mother. I also recommend the book to educators and other people who work with adolescents. These events took place pre-Columbine shooting. I hope teachers who read this book are shocked at the way Pete's teacher ignores his obvious cries for attention in essays that fantasize about killing sprees and setting fires. Perhaps the intervening decade has taught us to take students' words more seriously. I commend the author for the amazingly detailed research and the way the fast-paced text weaves in people's backgrounds, realistic dialogue, and the perspectives of so many peers, jurors, law enforcement officers, parents, and the LOC members.

Published by Thriftbooks.com User , 16 years ago
I received an advance copy of Someone Has to Die Tonight. What an awesome book! You won't want to put it down. A very eye opening and fascinating look at a teenage gang. And how peer pressure and the desire for acceptance can lead to such devastating consequences. I can't wait for the next book with the rest of the story.
Trustpilot
Copyright © 2022 Thriftbooks.com Terms of Use | Privacy Policy | Do Not Sell or Share My Personal Information | Accessibility Statement
ThriftBooks® and the ThriftBooks® logo are registered trademarks of Thrift Books Global, LLC