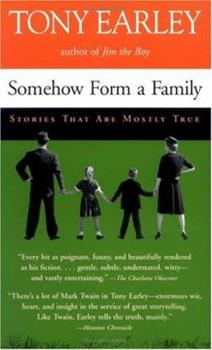 Somehow Form a Family: Stories That Are Mostly True

This is the book that in hardcover won unanimous praise from reviewers, who called it "beautiful and transcendent" ( The Boston Globe ), a book that "measures the arc of a culture's mortality in small, personal increments" ( Star Tribune , Minneapolis), is written "in a poker-faced style that always seems on the verge of exploding into manic laughter or howls of pain" ( The Atlanta Journal-Constitution ). They're right. Tony Earley is a writer so...

Somehow Form a Family (Stories That Are Mostly True)

Published by Thriftbooks.com User , 17 years ago
This book rekindled a flame in me to write some of my memoirs for our children and grandchildren. Written with heart and humor. Evokes many childhood memories.

Published by Thriftbooks.com User , 19 years ago
Tony Earley is a really great writer and this is a outstanding book! I first encountered Tony Earley in the pages of The Oxford American and his essay, "A Worn Path", which is included in this book. He is a wonderful writer and reading his essays brought back countless memories of my own life. I can't say enough about this book!

A Part of Some Family

Published by Thriftbooks.com User , 21 years ago
Tony Earley's book drew me in immediately...from the first page, the writing is captivating. As he walks the reader through his life from a prepubescent age until he becomes much of the man he is today, it is hard not to see his family, hear their laughter and their tears. His writing is easy to identify with...we all remember having emotions like those that he goes through. There is a face the reader can visualize for every character that appears. There is a voice for every person. This book is amazing.

Published by Thriftbooks.com User , 21 years ago
In the first essay in this amazing book, Somehow Form a Family, Tony Early writes; "I wanted to tell her that no one in my family ever raised their voice while the television was on, that late at night even a bad television show could keep me from hearing the silence in my own heart." That sentence caused my own heart to stop for a second. I put the book down and returned to it the next day. Tony Early writes in simple, concise English. There are no glossy, shiny adjectives. Each word is exact and to the point and utterly perfect. Jim the Boy was one of my most favorite books last year. Somehow Form A Family will I think, become a fixture in my home. One to be read and re-read for years to come. I better get another copy!

Published by Thriftbooks.com User , 21 years ago
Are we born with Tabula Rasa minds ready to absorb whatever TV shows happen to be on? Or do we come equipped with Jungian categoricies into which The Brady Bunch, Gomer Pyle, USMC and Hawaii Five-O naturally fit and are recognized (having been created by fellow-sufferers of the same categories)? How would Faulkner have re-written the opening lines of Sound and Fury if he had lived in the age of, say, the Guiding Light? Luster could have then watched soaps, instead of plain old golf.After getting re-acclimated to the TV shows of the 60s, 70s and 80s, this book does in fact read as well as the front cover says, with a reference to how reading this is how some people seem to eat cheeseburgers: they simply "inhale" them. So he writes like a TV show, and we inhale it. But I thought reading was a more active activity than TV gaping. Hmmm.To fit Hemingway-esque, brusque factual smatters in between TV show qoutes ("Five-O, open up") is very creative, and hard/dangerous for a writer. It's risky because it can get too cute and trite; it's hard, because even if it survives the cute/trite test, it could then get grounded out on sheer boredom issues. It could be stupid. But Earley makes it past these obstacles. His TV memoirs do take wing, and carry the facts of his North Carolina childhood and foray into college and vocation.Two chapters laden with TV shows lead to TV-free subsequent chapters, reflecting more grown up themes, as well as touching struggles, like wanting to be baptized at age 8, but being throttled back by a visiting pastor who thought he was too young; then when the grown ups thought he was ready at age 12, not wanting to. The final chapter's story contiues to examine Earley's married life, with a ride on the Concorde and a trip of flights around the world, where dialogues with all kinds of fellow passengers are now substituted for the earlier device of using TV shows for contextualization. Then he ends up in Pittsburgh, of all places, happily married and powering on, past the strong memories of youth.Favorite quote: "The only way that the word personal can be made more noxious is to immediately follow it with the word journey..."
Trustpilot
Copyright © 2022 Thriftbooks.com Terms of Use | Privacy Policy | Do Not Sell My Personal Information | Cookie Preferences | Accessibility Statement
ThriftBooks® and the ThriftBooks® logo are registered trademarks of Thrift Books Global, LLC