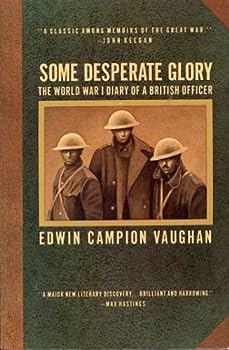 Some Desperate Glory: The World War I Diary of a British Officer, 1917

Some Desperate Glory charts the progress of an enthusiastic and patriotic young officer who marched into battle with Palgrave's Golden Treasury in his pack. Intensely honest and revealing, his diary... This description may be from another edition of this product.

Published by Thriftbooks.com User , 14 years ago
Vaughan's diary is a very worthwhile read. His months at the front begin at a "quiet" sector of the Somme near Peronne where he grows accustomed to the daily rhythm of the war, and the periodic return to the rear afforded by relief. Then his unit is transferred to Ypres for the great attack of 3rd Ypres in August 1917. This was the attack stymied in mud that cost over 500,000 Allied casualties and gained just a few kilometers of muddy ruin. It is the attack that caused the name Passchendaele to enter our vocabulary. The battle devastates Vaughan's unit. Vaughan's account of his experience in this battle, and the contrast with his other experiences on the Somme is simply gripping. He is matter-of-fact throughout. He had no idea that the images he wrote about would haunt the European memory for decades. He simply wrote down each day what he saw and happened to him. I read the hardcover (and plan to read it again). My only complaint is with the 2 maps, which are quite inadequate and spread across 2 pages so they are split at the binding. Nor do the maps show the location of the front lines. [ Isn't it an old military saying that "a battle is an event in war that occurs at the edge of 2 maps"?] If you put the names of the villages Vaughan mentions into Google Maps you can trace many of the same roads that Vaughan describes walking along. The population of these villages and the roads connecting them do not seem to have changed much in almost 100 years. It is sometimes eerie to do this, but much better than referring to the poor maps in the book.

Eight Months on the Western Front

Published by Thriftbooks.com User , 14 years ago
The book brings to life the figures depicted in WWI photographs and videos. Vaughan's matter of fact descriptions of daily "wastage" as well as the horror of "the attack" are gripping especially when juxtaposed with doubts about his courage and ability to lead, and his fear of appearing "windy." His more age appropriate hi-jinx described when he is in reserve jarringly remind the reader of Vaughan's youthfullness. Vaughan is not a diary quote or letter extract--he is very real to the reader. The irony of his death by medical misadventure, having survivied the Western Front is also striking. Highly recommended for anyone interested in who fought the Great War on the Western Front.

One of the best World War One Memoirs

Published by Thriftbooks.com User , 16 years ago
A diary of 8 months in the life of a 2nd lieutenant in the Warwicks, ending at Ypres in August 1917, full of detail of their daily life and extremely well written. Entries are quite long and revealing of the characters of the author and his fellow soldiers; it is really remarkable how they held up. A story of mud, corpses, whisky and carrying on. The last paragraph sums it up: "So this was the end of 'D' company. Feeling sick and lonely I returned to my tent to write out my casualty report; but instead I sat on the floor and drank whisky after whisky as I gazed into a black and empty future."

As If You Were There With Him

Published by Thriftbooks.com User , 19 years ago
I have read much history, and much about the Great War. Nothing I have ever encountered had the impact of this small volume. The war recored here gravely wounded our civilization, and in these pages you can see that wound at its creation.

Published by Thriftbooks.com User , 24 years ago
Many readers have ended their inquiries concerning the First World War with diaries by well known authors such as Robert Graves or Siegfried Sassoon. Less well known, but easily at home with more famous Great War accounts, Edward Campion Vaughan's work provides an unpolished, but equally shocking glimpse of the World War. Vaughan's vivid, and thoroughly candid account of his experiences as a young lieutenant on the Somme during the First World War lacks some flourish -- but the details and travails he describes transcend his journeyman style. Vaughan's tools are honesty, realism, and a good hard look at the ordinary cares and hardships of a soldier. There are no elevated themes in this book - no glimpses of liberty or democracy, king or country, no metaphysical questions -- just a 19 year-old coping with leadership, war, death, the enemy and duty. That this book has even survived into reprint is miraculous considering the reluctance, noted in the preface, of his family to release the manuscript (it was thought it would reflect poorly on the author's reputation that the book details his increasing resort to drink in the trenches). This is an excellant book and a valuable contribution to WWI scholarship.
Trustpilot
Copyright © 2022 Thriftbooks.com Terms of Use | Privacy Policy | Do Not Sell or Share My Personal Information | Accessibility Statement
ThriftBooks® and the ThriftBooks® logo are registered trademarks of Thrift Books Global, LLC