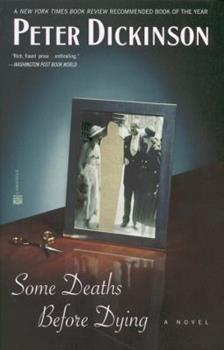 Some Deaths Before Dying

Harrowing Suspense in the Most Unexpected Places Paralyzed by a debilitating illness, 90-year-old Rachel Matson finds herself confronted by a disturbing mystery -- one that begins when a 19th-century pistol that belonged to her husband pops up on Antiques Roadshow. Determined to solved it, she begins the arduous task of teasing the past from the shadows, uncovering a tale bearing a sordid secret -- and an even more devastating truth.

A Mystery With Poignance and Style

Published by Thriftbooks.com User , 14 years ago
In Peter Dickinson's "Some Deaths Before Dying," the amateur sleuth is completely paralyzed -- bedridden and pretty much waiting to die. This could have been a tedious and even dispiriting book to read, but it didn't turn out that way at all. This is a very good mystery but also a wonderful, touching story on many other levels. At first the mystery seems fairly simple, almost insignificant. How did a dead man's gun wind up on the "Antiques Road Show" in the company of a strange young woman? But this little mystery in turn leads to revelations about much bigger crimes and ever more shocking plot twists. The reader is definitely made to empathize with bedridden sleuth Rachel Matson and her urgent need to resolve a crime long covered up. Rachel was a talented photographer and a fairly independent woman in her youth (during World War II). She's a sturdy, no self-pity allowed type, so the reader isn't put off by by her predicament. Rather, you find yourself fascinated by her determination to find out what really happened to the gun and to make peace with her own relatively small part in the cover-up. There are wonderful character studies throughout the book - Rachel's is foremost of course, but the secondary characters are also wonderfully alive and three-dimensional. Beyond the mystery to be solved is the story of Rachel's love for her husband, and of the secrets the two of them were forced to keep throughout their lives. A moving, haunting and well-told tale.

Welcome Back to Peter Dickinson

Published by Thriftbooks.com User , 19 years ago
Peter Dickinson is slowing down a bit, but all his unique talents are on display in "Some Deaths Before Dying." The book is his usual mix of mystery, psychological insight, and social history. The central character is an old woman, Rachel Matson, dying and paralyzed, who attempts to solve the central mystery of her life and marriage. A perennial bystander to life, Rachel is aided in her task by voluminous albums of photos she has taken throughout her life -- even at her own wedding!The drama unfolds slowly as more characters are introduced and we learn more about Rachel, her family, and her husband Jocelyn. In the end, the mystery is solved and, while it proves to be appalling, one can't help be impressed by the intellectual ingenuity of Rachel's laborious reconstruction.The characters are finely drawn; the novel itself was elegantly written and well-structured using the tricky flashback technique in which Dickinson excels. I was disappointed, however, in its moral emptiness. Ultimately Rachel was concerned only with knowing what happened, not in understanding the events and certainly not in forgiving anyone, either herself, her husband, and those who betrayed them.

A pleasing return to the field by one of our best writers.

Published by Thriftbooks.com User , 22 years ago
Peter Dickinson is a writer who couples great insight into human character with a quirky genius for special effects. This latter talent has been evidenced more in his wonderful childrens books over the last few years, than it has in his mysteries. No longer are apes the sole witness to horrendous crime; or households of somnulent children the background to sensitive explorations of life and death. In Dickinson's last two adult novels he has concentrated on the imagined lives of his characters, and they take central stage. I think these books are equally accomplished, though less pyrotechnic. I suspect I will return to them, perhaps more often through the years.I urge any readers of Dickinson's adult works to try his children's books. Tulku is very fine, as is The Blue Hawk, Annerton Pit, The Dancing Bear, and Bone from a Dry Sea. The other children's books, such as the recent Kin series are equally wonderful, but are aimed at a generally younger audience.

Much more than a mystery.

Published by Thriftbooks.com User , 22 years ago
Very simply, this book should appeal to anyone who likes good fiction. It is so much more than a mystery -- perhaps a treatise on living and dying. One of the best books I've read in a long time -- and I've read a lot of good ones.

Published by Thriftbooks.com User , 22 years ago
Though ninety years old, Rachel Matson's mind remains as fully functional as it was when she photographed the world. Alas, the same cannot be said for her body, which is paralyzed and failing as death nears.While watching a TV auction, a stunned Rachel sees an antique pistol that she gave to her now deceased spouse when he returned from being a Japanese POW during World War II. Rachel needs to know how a stranger placed her spouse's pistol on the sale block. Using her keen intelligence, Rachel begins to investigate. She starts by searching the old photographs that she took of her beloved and his regiment who were also held prisoner in the Pacific to see if a clue lies with one of them.Peter Dickinson is more than just one of the masters of the English country mystery. He is one of the few grandmasters as his novels are always deep, entertaining, and original. SOME DEATHS BEFORE DYING clearly meets all three adjectives listed above. The story line is filled with depth as emphasized by a warm, wonderful, and unique amateur sleuth. The enjoyable novel is entertaining and will bring Mr. Dickinson a horde of new fans. No doubt original because only an author of Mr. Dickinson's talent could take a seemingly helpless individual and turn her into a dynamic detective within a realistic and exciting tale. The best seem to get better.Harriet Klausner
Copyright © 2020 Thriftbooks.com Terms of Use | Privacy Policy | Do Not Sell My Personal Information | Accessibility Statement
ThriftBooks® and the ThriftBooks® logo are registered trademarks of Thrift Books Global, LLC