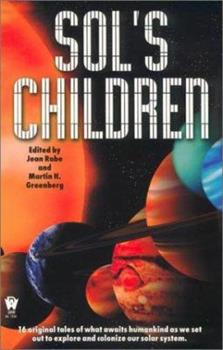 No need to shoot for the stars when some of the greatest tales of the universe are right here in our very own solar system. Take a tour through these new, original stories with such acclaimed... This description may be from another edition of this product.

Published by Thriftbooks.com User , 18 years ago
This anthology is comprised of seventeen stories taking place at varying points in the future within our solar system. From the moon to Mercury to Pluto to the asteroid belt, all the planets or their moons are used as settings. Timothy Zahn's "Old-Boy Network" takes place on Mars; it is a story in which the human toll from avaricious greed is revealed. The ending is as good as one could hope, were we in such a position. Brian A. Hopkins' "Mirrors" and Mike Stackpole's "Least of My Brethren" both give insight into how we should treat those beings we create through genetic engineering to be subservient. In their humanity, be it vengeful or sacrificial, their true hearts are revealed, regardless of their outward humanity. Jack Haldeman II's "In Finnegan's Wake" and Brian Thomsen's "The Grand Tour" take us on a tour of the system in the guise of a race (Haldeman) or a last great exploration (Thomsen). In "Finnegan" two people try to triumph over their personal ghosts, while in "Tour", a poet ends up siding with scientists and the great curiosity latent to humans. John Helfers' "Ghosts of Neptune" is the longest in the collection, and is not too bad. While seeming familiar to other stories, this seemed more apt to be expanded into a novel rather than being the short we are given. Rusch's "Moments" and Bingle's "Patience" give us tales of murder. The difference is that one is the result of corporate profit-enhancement, the other of unadulterated madness. Bingle's story is one of the best in the book, in which I particularly liked the lack of hypocrisy in the murderer. Jeff Crook's "'Roid" is another good story. One man makes a sacrifice in vain to do what he believes is right, though we learn his efforts were all for naught. "The Demons of Jupiter's Moons" by Resnick and Stafford gives a good accounting of man vs. alien. Those little beasties aroused the wrong sleeping dragon. Dupree's "Ringflow" and Gibson's "Acceptable Risk" both give us examples of exploration efforts gone bad. While neither end well for those involved, the end was the choice of each, and is somewhat ennobling in itself. Sullivan's "Martian Knights" is a good man vs. machine conflict. Making good use of irony, he shows us that not all members of a group should be judged by their fellows of that group. Davis' "Omega Time" tells the story of a man who could live without his deceased wife, but faces the promis he made that they would be together, in his mind not just unto death, but beyond it. Green's "Son of a Belter Earl" is really not a good story. It moves slowly and is uninteresting, doing nothing for the collection. Pack's "A Coin for Charon" illustrates very well that trust is too easily misplaced. Know your friends well, it seems, to ensure they are not, in fact, your enemies. I really liked this collection, which has SF stories in nearly every vein: Hard SF, horror, mystery, humor... The authors are a mix of well-known and lauded with lesser-known u

Out of This World

Published by Thriftbooks.com User , 19 years ago
I like what they call "hard sf," where the stories have some tech in them and make a reasonable amount of scientific sense. There are quite a few stories in this collection that match that criteria, which pleased me. There are also a mix of character-strong stories, and introspective stories. These I found enjoyable. I have two favorites, and those were the first and the last in the book, both of which made me think about "mankind."All and all, I would say this is an excellent collection with some top-name writers. It's definitely worth a look. There are also some names I've never heard of before--Jeff Crook, Gibson, and Pack. A good blend of high-profile authors and newbies.
Copyright © 2022 Thriftbooks.com Terms of Use | Privacy Policy | Do Not Sell My Personal Information | Accessibility Statement
ThriftBooks® and the ThriftBooks® logo are registered trademarks of Thrift Books Global, LLC