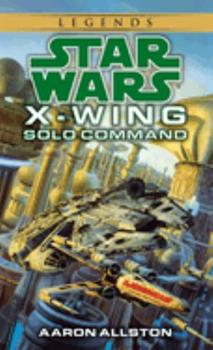 Wraith Squadron: they are the Rebel Alliance's ultimate strike force. Sleek, swift, and deadly, they are the first in battle, the last line of defense. Now they must find and destroy a wily enemy more powerful than the Empire itself. Their covert mission has been a success. The enemy has been vanquished. Or so they thought. The Super Star Destroyer Iron Fist somehow escaped destruction and with it the New Republic's greatest threat, the infamous warlord...

Star Wars the way it should be: fun and exciting

Published by Thriftbooks.com User , 16 years ago
"Solo Command" is the seventh volume in the X-Wing series and is the concluding book of Aaron Allston's trilogy about exploits of the Wraith Squadron founded by Wedge Antilles. To give a quick refresher, Wraith Squadron was formed because Wedge's Rogue Squadron was so well known as being the best that anytime the Rogues were dispatched on a mission any chance of covertness was eliminated. While the Rogues were the best of the best, a Star Wars Top Gun squadron, the Wraiths were chosen from the dregs of the New Republic. These are the pilots who, for one reason or another, were going to wash out. This isn't to say that these pilots can't fly an X-Wing, because they can, but rather it was often behavioral issues that caused the problem. But Wedge didn't form the Wraiths to be an elite unit like Rogue Squadron. Wraith Squadron is to be a unit designed to get the pilots in close and do insurgency missions, often on the ground. The primary mission of the Wraiths has been against the Warlord Zsinj, a former Imperial turned criminal who is the largest threat to both the New Republic and the vestiges of the Empire. Finally the New Republic and the Wraiths will be going after Zsinj directly. The plan is to attempt to lure Zsinj into a battle where his flagship, the Iron Fist, can be captured or destroyed. To do this, the Wraiths are using Han Solo and the Millennium Falcon as bait...or a decoy of the Falcon. The Wraiths, the Republic, and even an officer in the Empire are working together to attack the businesses of Zsinj so that he will be forced into combat. Meanwhile, Zsinj is working against the New Republic by activating a project of his to install fear and distrust between humans and non-humans in the Republic, and it was this original mixing of the races that proved so strong for the New Republic in light of the anti-alien stance of the Empire. But now this is being threatened and the Council of the New Republic has no evidence that the events are anything other than attacks by the individual races. "Solo Command" is quite possibly the best of the three Wraith novels and is as good as some of the Rogue books. It still features a rather large amount of humor and jokes and pranks with the Wraith pilots, but features a faster moving plot that actually seems to be going somewhere. The previous two Wraith books didn't really seem to advance any sort of storyline. Something else that I liked here was that the Rogue Squadron was included on the main mission here, so there was intermingling between the two X-Wing squadrons that Wedge commands. Han Solo also makes a guest starring appearance here and it was nice to see how he fits into all of this (thus far in the chronology he hasn't had a lot to do, though I know he's been busy and will get a larger role in future novels). All told this was a satisfying conclusion to the Wraith trilogy and it leads into the storyline of "The Courtship of Princess Leia". "Solo Command" features

How do I love thee? Let me Count the ways

Published by Thriftbooks.com User , 21 years ago
1. The Rogues are back with more to do. Corran Horn, Tal'Dira, and Iniryi Forge have quite a bit of stuff here. Forge's one chapter seems to give more dialogue than Stackpole ever gave her after WEdge's Gamble. (Man, this keyboard is messed up. Any mistakes are probably because of the keyboard. Keys are sticking all over the place.)2. The humor is still great. Wedge' mutiny and his revenge on Jansen are terrific. Elassar Targon seems to fit in well withthe Wraiths, except for Runt of course.3. Awww, Wedge is back with Iella, I guess. Sort of. She's mentioned in one scene. Anyway, they are back together. 4. Han Solo is dead on with character. Great job, Allston. 5. Great Drama marks this book. The scene where Face accidently makes a revalation over an open comm channel is great. Wraiths in the oven, also good. Wedge and Baron Fel played out great too.6. Deaths. Allston has backed the body count down a notch or two but the deaths of characters are appreciated. Two relatively minor characters are dispatched in various battles but the way one of them dies is particularly chilling.7. About time we had assasins in the SW universe. The attacks on the political and military officials were very nicely done. 8. Opening. Allston has the best opening paragraphs of any SW EU author IMHO. He started off Iron Fist with a bang and he matches it here. Twelve minutes to live. Wow!!One minor quibble:It got a little old having Solo jump in and pound at Zsinj and then having him jump out and Solo slumps his shoulders in despair. Redundancy and predictability are the name of the game in these slugging mathces.Gotta go. I'd stay longer but someone just came in to tell me that the Rancors are stealing my top hats. I've got to put a stop to that. See ya.

Not so big and bad Zsinj

Published by Thriftbooks.com User , 21 years ago
I loved this book because it really expands the characters from the first 6 books.Zsinj is the perfect bad guy you just love to hate but he doesnt quite beat out Thrawn. I loved all the comedy elements up to and including Wedge's mutiny and Face's awesome practical jokes. This is a great book for everyone. Yub, Yub Commander.

No words to appropriately describe this exellent book.

Published by Thriftbooks.com User , 22 years ago
The best book I've ever read. Allston makes the life of a pilot sound like an exciting and daring adventure. And he picked his charactors so well. who woulda thunk that Solo woulda become commander of a star destroyer. An excellent book to use to convert anyone to the SWU.

This book is great lot o' action without the technicalities.

Published by Thriftbooks.com User , 22 years ago
I loved this paricular "X-wing", it was different from the others in a way that it didn't focus on "inside the cockpit action" instead of talking about your gas levels,etc. The author got to focus on the action around the sqaudron members themselves. I thought this was great!! The beginning is a little confusing but the author quickly clears it up by revealing the plot. I do however think the author should have focus more on all the members on Rogue Sqaudron and Wraith sqaudron in more detail. He only keyed in on certain characters. The ending to me made the suposodely GA. Zinj look more like one of the pathetic admiral that could never live up to the origanlity of GA Thrawn (Zahn trilogy). Other than those minor quirks it was a good read, however u must have some knowledge of theprevious books to understand this one.
Copyright © 2020 Thriftbooks.com Terms of Use | Privacy Policy | Do Not Sell My Personal Information | Accessibility Statement
ThriftBooks® and the ThriftBooks® logo are registered trademarks of Thrift Books Global, LLC