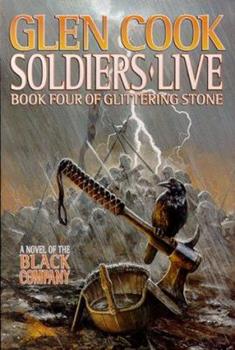 When sorcerers and demigods go to war, those wars are fought by mercenaries, dog soldiers, grunts in the trenches. And the stories of those soldiers are the stories of Glen Cook's hugely popular Black Company novels. If the Joseph Heller of Catch-22 were to tell the story of The Lord of the Rings, it might read like the Black Company books. There is nothing else in fantasy like them.Now, at last, Cook brings the Glittering Stone cycle within the Black...

Published by Thriftbooks.com User , 20 years ago
I'm still a little disoriented, as I only finished the book about 10 minutes ago. My title sums up my entire mental process right now, though not my emotional one.This is an excellent addition to the Black Company series. As another reviewer pointed out, it wraps up Glittering Stone without really ending the story of the Black Company. Not only is there the brand-new Company with its several Annalists, there's some serious room for flashbacks. I expect further installments, though I'm not on the edge of my seat just yet."Soldiers Live" opens the way we expect Black Company novels to open. We have our familiar characters all in place (a surprise to me, since One-Eye died at the end of "Water Sleeps") and it quickly becomes apparent that just about every loose thread is going to be tied up.Having read many reviews (quite a few were inaccurate, by the way... Croaker does NOT begin "Soldiers Live" as the military dictator of Taglios!), I was prepared for surprises. But they just kept coming. This is a novel of attrition; in a story so long, many of our favorites are sure to pass away. And even so, the surprises just kept coming. Quite a few anticlimactic moments added to the surprises Cook offers his readers. But gut-wrenching unpredictability is a hallmark of the series.It's been so long since I've read a real page-turner (let's face it, the last few Black Company novels weren't) that I forgot what it's like to want to stay up all night reading. If you're a fan of the Black Company, you'll miss out on some sleep finishing this one. And if you're like me, you'll read the last chapter a few times and marvel at how the story all gets wrapped up in a package labled "Start Here."

Published by Thriftbooks.com User , 21 years ago
I've written a lot about Cook's series over the years, and I do feel this was a very fitting ending to this chapter of the Annals.However, folks seem to have missed something. Not only did Cook set it up for a continuation of the Company, he also paved the way for prequels! With Croaker's new position (how's that for obtuse?), he can dwell on his own memories (you have to read the book to understand what I'm talking about) and see how the original Companies were formed and came forth from Khatovar. Which means he COULD go back in time, to when a young Croaker joined the Company. We could meet with our old friends again, from when they were younger.Me, I think this would be pretty damn cool, as we could see the south side of the Sea of Torments, with the Jewel Cities, etc.I think maybe I'll drop Glen a letter at TOR with just this idea...Thank you, Mr. Cook, for 16 years (or so) of delightful Black Company reading. Now, more Bragi!

Published by Thriftbooks.com User , 21 years ago
This book totally knocked me flat. But then again, all the books in this series have, over and over again. I don't believe that I've ever been so engrossed in a fantasy or sci-fi book as I have been in any of this series. They're totally amazing to me. The battle-field perspectives that they're told from and and all the characters I've grown to care about always have me eagerly awaiting the next book in the Black Company series.I stumbled across the Black Company books a few years ago, and since then I have devoured every book in the series along with all of Mr. Cook's Garrett series as well. Mr. Cook, you totally blow me away with these books and the incredible characters you've created. Thank you so very much. Please keep cranking them out and I'm sure all of us will keep snapping them up.Now, what I don't understand is why Mr. Cook dosen't have more promotion and why isn't this series more well-known? It a shame that so many people simply are missing out on this series of books (and the Garrett books are just as good). I "accidentally" discovered the Black Company, and boy am I oh so glad I did! :P

Published by Thriftbooks.com User , 21 years ago
In my estimation, the Black Company books, collectively, represent the best of the genre. Nothing else even comes close. Although some aspects of the book may be troubling to devoted fans (the attrition of characters near and dear from previous books, in particular), its more troubling aspects are its greatest strengths. This book may be one of the blackest, bleakest, and most blighted of any in a series that has distinguished and distanced itself from the "young woman struggles to unlock the frightening but wondrous powers buried within her" trash that has come to typify contemporary fantasy. It has the moral ambiguity appropriate to the conclusion of an anti-epic like Glittering Stone, and the gnawing sense of futility that infects Croaker's narration makes the sacrifices of an aging mercenary seem more, rather than less, redemptive. All the things diehard fans demand from a Black Company novel are there, but as Croaker (to my mind, the heart and soul of the Company) sees himself as increasingly remote from the latest incarnation of the Compnay, his feelings on his fallen comrades mirror our own feelings on our favorite vanished characters (Goblin, Silent, Elmo, even the Limper). The ending (if it is truly an END to the Black Company) was, as another reviewer put it, "very disturbing." I agree, but would argue that the ending was perfect, even necessary, for the series, and that it exemplified what it is that makes the Black Company so different from everything else out there, and so worthy of the outlandish affection its fans feel for it.

Disturbing to say the least!

Published by Thriftbooks.com User , 21 years ago
Wow! What else can really be said, it is about durned time that Croaker wrote the book again. This book is most probably the last of the Black Company series I would suppose. It ties up all those loose ends you have been worrying about, though the end is very very very disturbing. Insanity rules the day, as it usually does. This book also contained the sarcasm and wit that endeared the original to most of us, and it is supported by strong characters and heavy duty sorcery. I am still amazed by this book. It took me two days to read it, and that being only at night, engrossing is the word.
Copyright © 2020 Thriftbooks.com Terms of Use | Privacy Policy | Do Not Sell My Personal Information | Accessibility Statement
ThriftBooks® and the ThriftBooks® logo are registered trademarks of Thrift Books Global, LLC