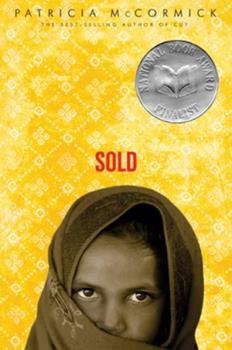 Lakshmi is a thirteen-year-old girl who lives with her family in a small hut on a mountain in Nepal. Though she is desperately poor, her life is full of simple pleasures, like playing hopscotch with her best friend from school, and having her mother brush her hair by the light of an oil lamp. But when the harsh Himalayan monsoons wash away all that remains of the family's crops, Lakshmi's stepfather says she must leave home and take a job to support...

Published by Thriftbooks.com User , 5 years ago
This was the first book I had ever read in verse, and also one of my favorites. This is a heartbreaking story, but such an amazing read. It really opens up your eyes on the issues that go on outside of our own lives

Published by Thriftbooks.com User , 5 years ago
Out of all 1,025,110 words in the english language, I cannot string any of them together to express my feelings of this book. It was devastating to read. I loved it nonetheless. It follows a 13 year old girl as she is sold into prostitution. I recommend this to anyone and everyone. 10/10

Published by Thriftbooks.com User , 14 years ago
Writing about how Nepalese girls are sold into slavery and taken to India to be forced into a life of prostitution is no easy matter -- especially in a YA book. Given the topic, Patricia McCormick manages not only to pull it off, but to pull it off with sensitivity. McCormick is a writer's writer, and the calibre of wordsmithing is a cut above your average YA fare. She first conjures the natural beauty of mountainous Nepal, even though her protagonist, a thirteen-year-old girl named Lakshmi, is dirt poor. Then, for contrast, she describes the claustrophobic penury and filth of Lakshmi's city captivity. In Nepal, our young protagonist lives with her Ama and her evil stepfather (a twist on the Cinderella motif). It is he who ultimately gambles what little they have away and heartlessly sells his stepdaughter into slavery (she assumes she is going off to be a maid and bravely vows to send what she earns home so her Ama can install a tin roof on their hut). After a grueling trip into India, Lakshmi slowly discovers what's up and refuses to partake, but is drugged and forced to acquiesce. There are two scenes where it is clear what is happening, yet McCormick is anything but brutal and ugly while describing these brutal and ugly acts against an innocent child. Nevertheless, a mature and sensitive reader is called for, and the book is recommended more for high school aged readers and adults. Written in free verse, an increasingly popular style of writing in the YA trade, SOLD will move you and anger you -- exactly McCormick's intent. It's beautifully written and worth all of the accolades it has received (it is a National Book Award finalist). Highly recommended.

Published by Thriftbooks.com User , 14 years ago
SOLD tells the story of Lakshmi, who lives in a tiny mountain village in Nepal. She lives in a hut with her stepfather, mother, and baby brother. Poverty is all Lakshmi knows. She speaks of swallowing her spit and pretending it is soup, tightening her waistcloth to fool her belly into thinking it's full, and thickening her stew with dirt. Lakshmi dreams of going to the city like some girls and working for a rich family to send money back to her own relatives on the mountain. One day her stepfather returns home with a woman he says Lakshmi should call Auntie. He has made a deal for Auntie to take Lakshmi down the mountain to work. It seems her dream has come true, and her journey begins. Traveling down the Nepalese mountain and across the border into India is at once both exciting and frightening. Lakshmi, whose mountain life has been nothing but poverty and hard work, marvels at the sights and sounds of city life. Trains, buses, cars, and trucks amaze her. There are crowds of people and shops as far as the eye can see. Lakshmi arrives at her destination. She is told she will be working for a woman she is to call Auntie Mumtaz. Prepared to work hard and earn her keep, Lakshmi is shocked to discover what her real duties will be. She is thrust into the arms of an old man with onion breath. He kisses her and begins to demand the unthinkable. Terrified, Lakshmi runs. Auntie Mumtaz orders her capture and locks her in a room. After days of starvation, beatings, and cruel treatment, Lakshmi realizes she will need to cooperate to survive. Patricia McCormick uses a blunt and direct narrative style to present Lakshmi's horrific experiences. The story is heartbreaking, yet uplifting, as Lakshmi shows courage and determination to maintain her identity and survive her ordeal. Readers will hold Lakshmi in their thoughts long after finishing her story. Reviewed by: Sally Kruger, aka "Readingjunky"

Published by Thriftbooks.com User , 15 years ago
This book is a deep and horrifying look at what could happen to any girl in southeast Asia at any time, and that fact alone is why it succeeds. It is an uncensored and very effective view of an unthinkable world, written in first-person and present tense which makes it all the more intense and realistic. I am 12 years old and I have been aware for quite some time of the basic idea of prostitution, but this book deals with the issue on a much more personal level, and as a result it raises the reader's awareness of just how terrible such a thing is. Even the scenes before the introduction to Happiness House make you feel earnestly sorry for Lakshmi as her poor family struggles with the drought and then the monsoon. Even though Lakshmi wants nothing more than to leave, she finds friends in some of the other girls of the harem and a few boys from the city. These characters are all just as interesting as the heroine herself, ranging from the cruel manager Mumtaz to the teenage son of one of the older workers at Happiness House. The more grim scenes throughout the book didn't leave a very pleasant feeling in my gut, but they achieve their goal of honoring the bravery of the poor children who really live through this terrifying situation. While we are left at somewhat of a cliffhanger ending, it is a satisfying conclusion while along the road to it Lakshmi triumphs in all of the ways that matter - from learning how to speak English to standing up to the men who come to violate her every day. Highly reccommended for children and adults alike.

Published by Thriftbooks.com User , 15 years ago
Patricia McCormick Realistic fiction Lakshmi has 13 marks on her mother's chest, showing that she has lived through 13 years. Lakshmi lives in Nepal with her mother, brother, and step-father. Lakshmi's family is so poor they barley afford food. Lakshmi's mother, Ama, works very hard caring things back and forth for the men that work. With that money Lakshmi's step-father gambles it away at the Tea House. Lakshmi goes to school and she is top of her class. Lakshmi loves school, playing with her friend Gita and her goat. But when the Himalayan rains wash away all the family's crops, the family is left with nothing. So Lakshmi's step father sends her off to work for a family to support her family. Lakshmi is tricked into thinking that she will be a maid, but really she is sold into prostitution. Lakshmi moves to a brothel in India to work. She lives in a house called, "The happiness House," with other girls, until she pays off her families debt. Lakshmi's world in a blur, as she lives life at it's worst. I would give this book five stars. I would rate it the book so high, because of the depth of the writing. This book is a real page turner, because there is no dull part of the book. Patricia McCormick writes about some very hard issues in descriptive vignettes. Sold is written in first person, so the reader can really fell what Lakshmi is going through.

Published by Thriftbooks.com User , 15 years ago
This account of a young girl in India sold into the sex trade by best-selling author Patricia McCormick is extraordinary. I am an adult and after reading this book I was stunned by what is occurring to thousands of unsuspecting 13-year old girls in this part of the world. This book will appeal to adolescents and adults alike in educating about the horrors of a rarely publicized epidemic. You wonder how a value can be placed on innocent children who are being sold for a handful of rupees to help their poor families back home. The book is written in free verse which makes it a unique and very personal way of seeing the world from the main character, Lakshmi's eyes. I can certainly understand why this book is a National Book Award Finalist and hopefully a winner. However, this book is already a winner in my eyes.
Copyright © 2020 Thriftbooks.com Terms of Use | Privacy Policy | Do Not Sell My Personal Information | Accessibility Statement
ThriftBooks® and the ThriftBooks® logo are registered trademarks of Thrift Books Global, LLC