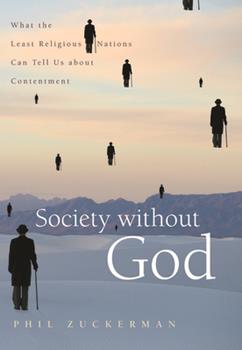 Society Without God: What the Least Religious Nations Can Tell Us about Contentment

"Silver" Winner of the 2008 Foreword Magazine Book of the Year Award, Religion Category Before he began his recent travels, it seemed to Phil Zuckerman as if humans all over the globe were "getting religion"--praising deities, performing holy rites, and soberly defending the world from sin. But most residents of Denmark and Sweden, he found, don't worship any god at all, don't pray, and don't give much credence to religious dogma of any kind. Instead...

Published by Thriftbooks.com User , 12 years ago
What can I say that hasn't already been expressed in other reviews? This book is excellent. Very well written and very interesting. I was shocked at many of the stories Zuckerman was told during his interviews about how if someone confesses to being a believer you're teased and thought of as an oddball. I can't wrap my head around the Europeans' culture, but it seems to be very content, peaceful, and not lacking in meaning, unlike what many theists say today about societies lacking a belief in god. Zuckerman's research surely puts to rest all claims that a strong religious presence and belief in god are necessary. The book is a fairly slim one, but it's packed with a ton of information. Near the end of the book Zuckerman contrasts the religious views and culture of the U.S. with the European countries and attempts to help the reader understand possible reasons why Sweden and Denmark are so irreligious. This part of the book was very interesting. He explains different answers to that question taken from other researchers and goes into some of the history of the U.S. and the European counties in an attempt to understand the reasons for the differences in the level of religious belief. Zuckerman makes it clear that his knowledge of the history of these places are minimal and there are many factors that go into how religious views of nations are shaped, but offered his views (which seem to me very logical and plausible) anyway to give his readers an explanation and to help further the discussion on these topics. If you're looking for an excellent and balanced treatment of the sociology of religion and what makes a person and place religious or not, this is a very good place to start.

Religion not necessary for bliss on earth

Published by Thriftbooks.com User , 13 years ago
The Danes and Swedes live in countries that consistently rank among the world's best in terms of social conditions. They have low crime and high economic equality. They have some of the lowest rates of infant mortality and highest life expectancy. They have one of the most educated populations on earth and as well as highest levels of happiness. They also are some of the most secular societies in existence today. Sociologist Phil Zuckerman spent over a year there interviewing and trying to ascertain how and why this is. His findings and explication of this culture would shock many believers who think that society and morality is founded upon religion. For instance, most Americans would describe about 75% of these people as atheist or agnostic for if they do not explicitly say they don't believe in God or a higher power, they will only say that they "believe in something." And many evangelicals would take that 75% to 95% for only about 5% of these Scandinavians believe that the Bible is the "Literal Word of God." But this isn't some simplistic screed saying that secularism begets a heavenly society for by no means is correlation necessarily causation. Nor are these countries without their share of problems (as is documented in the book). However, Zuckerman delves deeply into the multi-faceted and complex web of interactions that have led to such a very good society and his answers are many. They have a welfare state with free healthcare, virtually no poverty, and some of the least disparity between the rich and poor. They have had a different historical relationship with religion. Their state religion of Lutheranism has, like a lazy monopoly, failed to market its message (contrast that with the constant religious advertising we see in the US). And the explanation I found to be the strongest - their culture has never been perceived as at risk. (Religious belief strengthens to solidify in-group solidarity.) There are many topics covered at length and breadth in this wonderful book including the phenomenon of "cultural religion" where rituals and festivals are still carried out under religious guise but only a minority of people actually believe the supernatural content such as that the Danes and Swedes are fond of (compare Jewish people). However, that said, I must point out one glaring omission in the book - an explanation for the source of secular morality. Indeed, it is a, if not the, central point to the book that a society can be secular and moral. This topic is certainly dealt with, but only in a superficial manner. Many of the interviewees consistently say their cultural religion is a good thing in that it is their "ethical frame" (158). Following much of the interview discourse, Zuckerman often reflects back on what was said and offers analysis. On the roots of this, though, he is silent. In my estimation, morality is hardly ever religiously derived, even if people report it so and even if they don't believe in the s

Spot on! From a Scandinavian perspective.

Published by Thriftbooks.com User , 13 years ago
I'm a Scandinavian, living and working in Stockholm, Sweden, and I read Mr. Zuckerman's book from that perspective. Obviously he is very well read on the issues of Scandinavian societies and on religion in general, but I have to say that given that he only spent a year or so in Scandinavia, I'm very impressed with his thorough understanding of the finer nuances of the Nordic countries and the mentality of its people (he mainly deals with Denmark and Sweden) - and his descriptions and analysis of people's attitudes to religious and societal matters are interesting. In his book he shows that societies can be sane, prosperous and humane without people having a God-fearing approach to life, and he also presents some interesting ideas and explanations as to why the Scandinavian societies have become so secular, and reversely, why the USA has become so religious. His book and studies are clearly built on sociological research methods, but he carries a personal tone throughout the book which makes it very pleasant to read. And although some of the interviews in the book can be a bit lengthy at times, they provide a direct and valuable insight into the way the common Dane or Swede thinks on matters of religion, the church, life, death, etc. I would highly recommend this book to anyone with an interest in society and religion. And I also think it's a valuable read for us Scandinavians, to gain a deeper understanding of ourselves on the matter of religion...

The world can be more peaceful without organized religion

Published by Thriftbooks.com User , 13 years ago
The book presents an excellent case study of how solid, peaceful, and advanced society can be when we collectively view the world without acting out the literal word of the books that support organized religion. One major takeaway that surprised me was the contrast and comparison between how the Danes and Swedes viewed religion with a sense of spirituality and culture and the Americans viewed religion with a sense of literal and rigid interpretation and how that translated into our societies differences. I am personally embarrased of how our America thinks and behaves relative to this topic. To a great degree, we can step back and view American Christianity similar to how we view the worship of ancient cultures - Greek, Egyptian, Mayan, Incan, and see how antiquated our thinking is around this subject. This book was recommended to me through the Sam Harris blog, and I recommend it for anyone that is asking the question, what would society look like if we walked away from the literal interpretation of the Bible? While the book doesn't get into Islam, the same parallels can be drawn and points inferred. It briefly touches Judaism, which is ironically viewed more similarly to the Dane and Swede view of Christianity. Jews are surprisingly secular when viewing social topics. One last stat that surprised me was how large the secular/free-thinking/humanist population is across the world - 4th largest group (if you had to group this populus against labeled groups of believers and non-believers). Of the 6.8 billion of us currently on our planet, 2 billion are admittedly Christian (Catholic, Episcopal/Anglican, Lutheran,etc), 1.2 are Muslim, 900 million are Hindu, and 750 million are admittedly freethinkers. My instincts tell me that if we count the people that really are freethinkers, but can't yet part with their religious label, the number is much higher. At any rate, we seem to be waking up around the globe and viewing religion for what it really is. This book is a good piece for those wondering how moral, peaceful, economically solid, and culturally advanced we can be if we let go of the stories from these ancient books and live our lives by our true moral and instinctual compass.

godless believers in a humanistic approach to life

Published by Thriftbooks.com User , 13 years ago
phil zuckerman has presented a realistic view of people in america aswell as norway & switzerland who belive in a cultural religion without adhering to supernatural beliefs. One does not have to worship an omnipotent being. Myriads of people attend church & synagogue for the social and aesthetic beauty. As a jew I have humanistic beliefs and enjoy the music of a service without adhering to a supernatural God of the bible. Zuckerman has presented personal interviews with hundreds of people who have disengaged from the old beliefs of their parents & grandparents.
Copyright © 2022 Thriftbooks.com Terms of Use | Privacy Policy | Do Not Sell My Personal Information | Accessibility Statement
ThriftBooks® and the ThriftBooks® logo are registered trademarks of Thrift Books Global, LLC