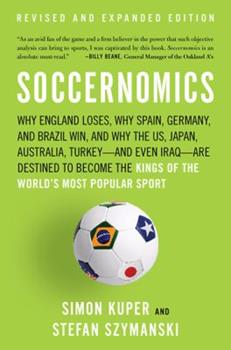 Soccernomics: Why England Loses, Why Spain, Germany, and Brazil Win, and Why the U.S., Japan, Australia-And Even Iraq-Are Destined t

by Stefan Szymanski and Simon Kuper

INTERNATIONAL BESTSELLER Named one of the "Best Books of the Year" by Guardian, Slate, Financial Times, Independent (UK), and Bloomberg News Soccernomics pioneers a new way of looking at soccer through meticulous, empirical analysis and incisive, witty commentary. The San Francisco Chronicle describes it as "the most intelligent book ever written about soccer." This World Cup edition features new material, including a provocative examination of how...

Published by Thriftbooks.com User , 13 years ago
Soccernomics is a fantastic look at a soccer from a completely different point-of-view than you're probably used to seeing. Using statistical techniques like regression and massive amounts of old match results and other data related to both the classic and modern game of soccer, Kuper and Szymanski bring a new insight to how we think of the beautiful game. There are sections on national teams, club teams, and fans, and they all bring a style similar to Freakonomics and its look at different popular subjects. The entire thing is written in an easy-to-read style, with entertaining anecdotes mixed in with clearly communicated results of statistical research. It sounds dry when you think about the premise, but there are no formulas written out or in-depth discussions of math or anything like that. If you are interested in soccer and the culture that surrounds it, you could scarcely do better than checking out this fantastic book.

One of the top 5 or so books on soccer

Published by Thriftbooks.com User , 13 years ago
A more robust, objective, quantitative approach to soccer is put forth by the authors to help dispel long-held myths and biases held in the game. I really enjoyed reading this book and gave it 5 stars despite some of Soccernomics' shortcomings. Perhaps it is because of this that this book can help generate interest and debate on objective analysis of soccer, similar to the evolution of Sabermetrics, first put forth by Bill James. In general, the authors succeed the most with their focus in the game off of the field, but their treatment of actual game tactics, besides penalty kicks, is answered for through an oversimplification that says that winning teams have adopted a Western European style, whatever that means. This view ignores the extremely valuable quantitative tactical work done by Lobanovskyi at Dynamo Kyiv that called for a high-tempo pressing game, which developed alongside a similar playing style that focused on system designed to press opponents developed in Holland at around the same time in the 1970's. These two tactical ideas ultimately influenced Arrigo Sacchi to formalize this type of system at Milan in the late 80's and early 90's. The author gives the example of Olympic Lyon as the soccer version of the Oakland A's, but by adopting Sacchi's methods of pressing opponents, Chievo Verona, one of the poorest teams in soccer, was able to effectively compete in Serie A for several seasons, although has bounced back and forth between Serie A and Serie B in recent years. Regardless, Chievo's accomplishment is highly noteworthy, and food for thought for developing a more objective view of tactical systems, a potential topic the authors could touch on in a follow up book or academic paper. The book also has two glaring inaccuracies that the book's editors overlooked, both of which are in the chapter about the NFL vs. EPL, although neither are anywhere close to fatal. First, Bradford played two seasons in the English Premier League, not one as the book suggests. They survived the 99/00 season on the skin of their teeth in an extremely exciting relegation battle, featuring the aptly named Bradford player Dean Windass saving the day. Bradford later would finish 20th in the 20 team division the following season and has been in free fall ever since. Note that I am not a Bradford fan, but will always remember Dean Windass's heroics. Second, the book suggests ties are not possible in the NFL. This is not true, although the frequency of such events are rare enough to render ties in the NFL almost non-existent. There are typically 1 or maybe 2 ties per season.

Excellent Read and Offers Surprise Truths About The World's Game

Published by Thriftbooks.com User , 13 years ago
Offers some very interesting insights into the world of soccer. While some compare it to Michael Lewis's "Moneyball", it differs in that "Moneyball" deals more with baseball at the micro level, while "Soccernomics" deals with soccer at a macro level. There is a lot of statistical analysis of national teams, but no analysis of individual players. In essence this is one of the difficulties of soccer, as it does not naturally lend itself to extreme statistical analysis like baseball does. My main argument with the book is that it treats the NFL as the US's main export sport. While the NFL is undoubtedly the most popular league in the United States, this is a recent phenomenon. Baseball has traditionally been "America's Past Time" and thus is the sport that the United States spread around the world, although not to the same level that the English spread soccer. One analysis that I wanted to read about was the success of Latin American teams. In particular an analysis of Mexico and Brazil. Both countries are soccer crazy and have very large populations, but Brazil has won five World Cups and Mexico none. It would be interesting to see an analysis of why this has happend, but the book mainly deals with European teams as their statistics are more reliable.

Published by Thriftbooks.com User , 13 years ago
The most intelligent book on football ever written. A fascinating plunge that tackles the games misconceptions, dispossessing the perceived wisdom of the elites, and the fanciful hopes of the hopeless. Everything from the stretch including fascinating analysis of the link between suicide rates and a nation's soccer success, and the growing muscle of soccer in lands frozen out for decades. Read a cracking insight into the mind of Guus Hiddink, the Merlin of the modern game. Simon Kuper is an outstanding soccer writer, unmatched. Linking up with Stefan Szymanski, they've pulled on a winning strip with this book. A must have for all futbol fans. Alan Black author of Kick the Balls: An Offensive Suburban Odyssey
Trustpilot
Copyright © 2022 Thriftbooks.com Terms of Use | Privacy Policy | Do Not Sell My Personal Information | Cookie Preferences | Accessibility Statement
ThriftBooks® and the ThriftBooks® logo are registered trademarks of Thrift Books Global, LLC