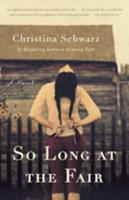 So Long at the Fair

Is it possible to be in love with two women at the same time? This is a question Jon has been asking himself frequently these days. He's loved his wife Ginny since the days when a chance encounter in the halls of their high school would leave him unable to speak. But recently Jon has found himself bewitched by Freddi, his colleague at the ad agency, where late-night brainstorming sessions devolve into giggles and sexual attraction. As Jon's guilt...

So Long at the Fair

Published by Thriftbooks.com User , 13 years ago
Usually, I don't like a plot that weaves from past to present so often that the story is difficult to piece to-gether. This time it was most enjoyable. Secrets of the past refused to be ignored, and unwinding their ties to the present was thought provoking. You will enjoy Jon's struggle to end his marriage.

A good look at life

Published by Thriftbooks.com User , 13 years ago
So Long at the Fair A Novel By Christina Schwarz Doubleday, Publisher ISBN: 978-0-385-51029-5 I originally was interested in reading this book because of the title and the location. I was born and raised in North Eastern Ohio in 1962 so the life that the main characters of this book lived is very much like my memories of growing up. On the first look this book is about adultery but it goes a lot deeper than that. There are two main time lines that take place and also an additional one thrown in just for some added flavor. Sometimes keeping these time lines clear can be difficult since a few of the characters show up in more than one time line but they have changed just enough that you need to double check often to see who it is that is being referred to. I found that the book grabbed me right away with just enough information to keep me reading to find out what happens. The main time frame of the book actually takes place over one morning and afternoon. This being said you realize that much of the book is filled with background information and time to get to know and understand the motivations behind the many characters. There are two groups of characters in this book that you discover early on are two generations of several families in one small town. It seems that what happens to them is seemingly unrelated. The 1960's time line has mystery and revenge. The later time line has adultery. Other than the fact that the people are related you find yourself wondering why they are important to each other. This I think is where a reader will benefit if they have a little bit of life behind them. The reason I say this is that while on the outside this is a book about all of the things listed above, on closer examination this is a book about life and how things can often go wrong. What is happening to the main characters Ginny and Jon is something that is not new. These are issues that many of us will face in some way in our lives whether or not we want to admit it or not. When we are younger we often think that our parents have no idea what the "real world" is like but as we get older we realize the valuable resource they are and often have overcome even greater self-imposed obstacles than we had. I liked the fact that this book shows the different paths that people can choose when hardship hits and how that will ultimately impact the rest of their lives. The ending is not at all what I expected. I did not like it at first. I did however come to love the ending once I had some time to think about it. I found this book to be very thought provoking. The writing was well done and I don't think William Faulkner could have done a better job with the time lines. If you are looking for a book to just be fluff about adultery you will find it in this book. But, it you want to look for something deeper you will also find it in this book. Open up to these characters all of whom are just trying to find their way through a difficult world. I th

Published by Thriftbooks.com User , 13 years ago
This a great story - a family saga about the secrets underlying a failing marriage that culminates in a completely unexpected conflagration that has the power to restore the shaken union. There are two, interwoven stories: a present-day one about the man, his wife and his mistres - all of whom have set in motion a plan that can only result in the wife's discovery of the affair - and a story set in the early nineteen sixties, describing some mysterious evetns that took place among the parents of this man and wife. I loved everything about this book, from the unbearable tension of watching the husband about to be caught out in his lies, to the gradual revelation about what happened so long ago to doom this marriage. But what blew me away was the ending - a double ending, actually - that reveals the mystery of the past, and also brings the players of the present-day story into an unforgettable, dramatic confrontation. "Drowning Ruth" is my all-time favorite novel, and it is great to see Schwarz returning to that territory of family secrets and the mystery of marital passion.

Published by Thriftbooks.com User , 13 years ago
I didn't know what to expect from this book (I haven't read Schwartz's other books), but I found its evocation of time and place pitch-perfect, its dissection of character probing but generous, and its examination of marriage penetrating and poignant. Moreover, it's a page-turning suspense novel. I really loved this book--and I'm turning next to All is Vanity.

Published by Thriftbooks.com User , 13 years ago
Jon, who works at an advertising agency has been married to Ginny, a landscape artist, for almost twenty years. He loves his wife, but theirs has become a predictable marriage, with Ginny constantly obsessed with her ability to get pregnant and the hope that a child will perhaps provide the panacea to all of their troubles. Although Ginny had once suffered a terrible accident, the doctors assured her that one day she would be able to have children. This knowledge, however does little to appease her sense of insecurity in herself and in Jon's commitment to her and in her marriage. Jon thinks Ginny is overreacting to the assumed prospects of having a child and although he readily admits to marrying for love and loyalty, enjoying a more than comfortable middle-class life, he's recently fallen into an affair with his work partner Freddi. As the novel opens, Jon is frantically soaking up Freddi's seductive emails, furtively sneaking behind his wife's back, the thoughts of Freddi's sharpness and softness always present in his consciousness. For her part, Freddi is in thrall to Jon's charisma. Although she's content to stay the mistress and the other woman, she still holds a glimmer of hope that only she is his "real love. " When Jon conceives of the plan to spend the day with Ginny at Summerfest, a local county fair, in the hope they can revisit a scene from their youth, a time they'd been so vigorously happy, Ginny responds by telling him she's booked up with appointments. It is this reaction that once again leaves Jon feeling unmoored. A basically good man, Jon resolves to finish it with Freddi, he loves Ginny and the thought of losing her fills him with a dark and breathless panic, but it doesn't stop him from wanting to feel connected to his early sexual impulses through his affair with Freddi. Central to Schwartz's story are the subtle shifts and changes that occur in the relationships between these three people, reflected in Ginny's reluctance to confront the truth even as she remains ignorant of Jon's philandering; and Jon as he frantically hides behind the growing problems of his marriage; and Freddi, her resentment at the situation rising like a "geyser in her chest" as she realizes she cannot count on anything from Jon, least of all a lifetime of commitment. And she's always conscious of the fact that Jon's debt to Ginny never seems to diminish. A number of secondary characters circle this threesome sometimes offering advice and consolation and at other times judgment. Jon's best friend and work buddy, Mark Kaiser offers a measure of moral stability, while Jon is forced to close his eyes against the memory of disgust he constantly feels is emanating from his friend. There's also Ethan who harbors a dangerous obsession for Freddi, originating from when they met in his first year of law school. Ethan spends his days obsessing and stalking his muse, constantly battling the unbearable feeling that Freddi is pulling away from him, and "that
Copyright © 2022 Thriftbooks.com Terms of Use | Privacy Policy | Do Not Sell My Personal Information | Accessibility Statement
ThriftBooks® and the ThriftBooks® logo are registered trademarks of Thrift Books Global, LLC