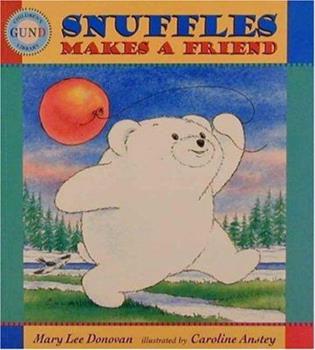 Inspired by the classic plush bear created by Gund, this is a story children will treasure as much as they do their very own Snuffles bears.

A fair example of literature which aims for fair-mindedness.

Published by Thriftbooks.com User , 23 years ago
It was the great literary critic Northrup Frye who said that most of western literature has the bible as its source. The children's book, Snuffles Makes a Friend has a resemblance to the biblical story of Noah and where the lion and the lamb lived together without the lamb being consumed. We all know that polar bears are powerful creatures yet in Snuffles Makes a Friend, Snuffles, the polar bear, is a vegetarian. Snuffles prefers raspberry tea and sweet potatoes to meat. The issue of social anxiety is also raised in this book as Snuffles makes friends with her next door neighbor Percy the Penguin, the latter being quite shy. This book is beautifully illustrated and printed on durable paper. It is a fair example of literature which aims for the facilitation of social interaction among its young readers and fair-mindedness towards neighbors.
Trustpilot
Copyright © 2022 Thriftbooks.com Terms of Use | Privacy Policy | Do Not Sell or Share My Personal Information | Accessibility Statement
ThriftBooks® and the ThriftBooks® logo are registered trademarks of Thrift Books Global, LLC