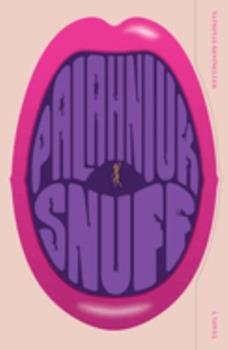 In the crowded greenroom of a porn-movie production, hundreds of men mill around in their boxers, awaiting their turn with the legendary Cassie Wright. An aging adult film star, Cassie Wright intends to cap her career by breaking the world record for serial fornication by having sex with 600 men on camera--one of whom may want to kill her. Told from the perspectives of Mr. 72, Mr. 137, Mr. 600, and Sheila, the talent wrangler who must keep it all...

Published by Thriftbooks.com User , 12 years ago
I was thrown off by some of the random vulgar comments (though I should've guessed it was coming seeing as I'm a Palahniuk fan) but I found myself laughing out loud and sharing some of it with the people around me. The book was hard to put down and was written well. As a side note, my boyfriend thought I was weird for reading such a bluntly grotesque book but he ended up stealing it, reading it and finishing it before I could!

Definitly for the twisted

Published by Thriftbooks.com User , 12 years ago
I laughed harder while reading this book more than any that I have read for awhile. It is Mr. Palahniuk's trademark twisted, demented norm. This isn't for the faint of heart. I was most impressed by just how well researched this book apparently was. The best part is how there is nothing wasted. Every sentence somehow relates to someone in the story. This is a must read for Palahniuk fans and fans of dark comedies.

"The Damaged Love the Damaged..."

Published by Thriftbooks.com User , 13 years ago
An over-the-hill porn star wants to go out with a (gang) bang, so arranges for a world record effort with 600 stout and hearty fellows, brave and true. A few of this cast of hundreds are there for more than their allotted 60 seconds of, ah, contact with the legend. She has deep ulterior motives, as do each of the featured characters, and all of their twisted narratives come together in the concluding pages. Someone is supposed to die as this event climaxes, and most of the folks know it, although their perceptions of the who, when and how don't quite match up. The plans go a bit off the rails, and everyone gets more or less what they deserve. The main characters certainly have had enough of the world, with what they have made of it, with their fortunes having turned on single instances and bad choices, in this case almost all of them sexual. Most everyone is ragingly bitter and resentful, untrue and self-serving, bent on rectifying only their problems, regardless of effects on others. The story runs on damaged adults hurting others, intentionally and instinctively, out of selfishness and revenge, or even to manufacture a more compatible companion. It's about the need for fame, the need for redemption, the resentment of future lost, and the clawing need to retain one's perceived best position, all taking place in arena of porn, the "...job you only take after you abandon all hope." This is not a novel about the sex industry, but there is some behind-the-scenes detail. Palahniuk's detailed portrait of the washed-up porn star Miss Cassie Wright is not as complete and detailed as I had anticipated. I don't know why, but every time I pictured her, a strange combination of Kitten Natividad and Lisa DeLeeuw came to mind. Ah, but I digress. She is more or less the central character, at least that around which all others and the main story revolve, but I was a tad disappointed in that we didn't get more from her. Much of this was necessary for plot purposes, but I thought we'd get a bit more inside her head, and hear a bit more about what Palahniuk has observed about the porn experience. Cassie is a treasure trove of obscure Hollywood factoids, though, all of them thoroughly fun and enlightening. And Palahniuk has observed; he slips in what appears to me to be his description of things that come to him, "...a remarkably rarefied set of facts for anyone to reference offhand." It was obvious even in Fight Club with the details about automobile recalls that Palahniuk is a collector of slices of divergent existence and uncommon experience. He's fascinated by the edge of the road, and he collects the esoteric, fascinating and titillating tidbits, saving them for the right time to drop into a story. We saw a very straightforward collection of these experiences in Stranger Than Fiction: True Stories. When it's time and the fit is right, these bits add depth to a character, provide the basis for a scene, or serve to power just a soliloquy. We