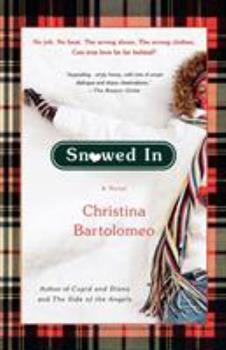 No job. No heat. The wrong shoes. The wrong clothes. Discover if true love can be far behind. Imagine having always lived in Washington, D.C., and suddenly being stuck in Portland, Maine, for a year. With the pipes freezing---inside the house. And a husband who seems to have his eye on a hiking-booted L.L.Bean femme fatale rather than you. Not to mention the mother-in-law from hell who never fails to let you know that you leave much to be desired...

Published by Thriftbooks.com User , 16 years ago
OK. I'll admit it. I like chick lit. Some of it anyway. And this is one of them. I know chick lit gets a bad name, but read this book and you'll also see how it can be funny, intelligent and compelling. While I was reading the book, I couldn't put it down and now that I've finished it, I actually find myself missing the characters. All of the characters are written with such details that they seem real to me. I'm betting they will to you too. Check this chick out; I'm betting you won't be disappointed.

Published by Thriftbooks.com User , 16 years ago
Christina Bartolomeo is really an underrated author; all Anne Tyler fans should be reading her work. Anyway, I thoroughly enjoyed the story of Sophie, a sweet, rather passive artist who feels "snowed in" in Portland, Maine. She's from DC and Maine is a little too cold and remote for her, but her husband, Paul, doesn't seem to care. Paul is spending a suspicious amount of time with Natalie, a perky brunette from the office, and Sophie is left with time on her hands. She joins a walking club and gradually makes new connections in the wintry city. This is a story that's meant to be lingered over and savored. It is somewhat slow-paced, but not in a bad way. You really feel like you know the characters, and Bartolomeo's sly little nuggets of insight are priceless. Highly recommended.

the writing makes you feel 'snowed in' with the characters!

Published by Thriftbooks.com User , 17 years ago
I don't know if a snowy weekend to read this book heightened my love of it but it was a very good story. Sophie and Paul leave the Washington, DC area for Maine because of Paul's job. Sophie does freelance artwork while Paul is the main breadwinner. Nathalie, Paul's coworker, develops a crush (as Sophie sees it) on Paul and their relationship threatens the marriage. Sophie joins a walking group to mingle with Mainers. There she meets Stephen and Ned who become constant friends. Just as snowflakes float slowly does this novel move through seasons of Sophie's year. She is faced with a horrible mother in law, Pepper, who comes for the holiday and treats Sophie in the ways only an insincere mother in law can behave. The reader roots for Sophie and witnesses her strength toward the end of the novel, as she needs to stand up for herself and lead the life she is meant to have.

A real winner in all facets -- highly recommended

Published by Thriftbooks.com User , 17 years ago
I must admit -- being from the South, I don't know much about the Northeast, let alone Maine. I've always just pictured beautiful fishing villages and/or really cold, depressing winters. So what I really loved about this book was the vivid and complex portrait that the author paints of Maine, particularly Portland, the state's largest city. It's easy to discern that Bartolomeo knows the city intimately, and that helps ground the story in reality. In Bartolomeo's novel, Maine is not reduced to simply being a beautiful vacation destination or the home of freakish Stephen King-style murder mysteries, but it is portrayed as a real place, with real people facing real-life struggles (job, marriage, family, in-laws, etc.). Hats off to the author on this. In addition, "Snowed In" is simply a riveting page-turner. Driving the action is Sophie, the novel's eminently likeable and engaging lead character. She carries the book through her deep humanity, witty (often hilarious) observations, and unrelenting desire to change her ho-hum life against difficult odds. This is an inspiring, poignant, and heartfelt book -- and one that will also make you laugh uproariously. I highly, highly recommend it.

Published by Thriftbooks.com User , 17 years ago
Three months ago freelance artist Sophie accompanied her husband Paul when his job caused him to relocate from Washington DC to Portland, Maine. After the hustle and bustle of the big city with the Metro to get around, the unlicensed Sophie finds the solitude disturbing. With so much time on her hands to brood and no place to go, Sophie worries that her spouse's new assistant bubbly yet effective Natalie seems to get more of Paul's attention and admiration than his wife receives from him. Depressed, Sophie several times calls her sister and her best friend, but neither lifts her from her doldrums while her mother-in-law Pepper adds spice to Sophie's already churning stomach. Desperate to get her mind off of her concerns Sophie joins a local walking club where she meets Ned who struggles with his own going nowhere relationship with a geographically distant girlfriend. This engaging character study looks at how a geographical change can impact relationships. Sophie goes from having no time to complete anything to having too much time causing her to brood and fret. The story line fully focuses on Sophie who holds the tale together while the rest of the cast predominantly relate to her. Her relationship with Pepper is a classic; while that with her spouse has deteriorated rather quickly as she feels he has moved on to being a rugged New Englander with a captivating snowbird assistant while she is turning into a boring SNOWED IN transplant failure. Fans of deep family dramas will appreciate the wry humorous asides inside the serious subject of the impact of relocating on marriage. Harriet Klausner
Trustpilot
Copyright © 2022 Thriftbooks.com Terms of Use | Privacy Policy | Do Not Sell or Share My Personal Information | Accessibility Statement
ThriftBooks® and the ThriftBooks® logo are registered trademarks of Thrift Books Global, LLC