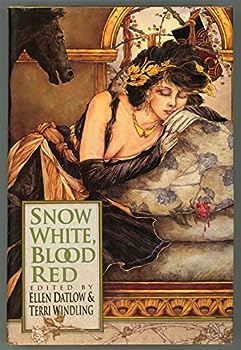 Published by Heidi Lynn , 10 months ago
The stories in this book were written in the 80's and follow the rape/pedophilia themes of that time. I don't recommend it for the simple fact of the pedophilia, and in one of the fairy tales it was eluded that the young girl may have also been mentally challenged.

Published by Condition not as expected... , 1 year ago
Warning!! Graphic content... is negative stars an option?

Published by Thriftbooks.com User , 13 years ago
Beautiful. Dark. Haunting. These fairy tales are going to stick in that subconscious, so be ready to dream! Datlow and Windling conquer a genre. Amber LaShea Holmes Snow White on Acid: Nine Fantastical Nightmares

Published by Thriftbooks.com User , 19 years ago
When I was a child, fairy tales, both Eastern and Western, were simply a routine part of my life. As an adult, I have found very few books of "adult fantasy" that really hold my interest, but Datlow and Windling's Adult Fairy Tale Series is something special.Snow White, Blood Red is a volume of about twenty fairy tales, reworked by some of the best writers in the fantasy, science fiction and horror genres. In fact, there are times when more than one writer will give his or her own unique version of an old fairy tale, making this book all the more special and unique.I think the introductions by Datlow and Windling only serve to enrich the book and make it all the more special. In "White as Snow," Windling discusses fairy tales in general in terms of the fantasy element; in "Red as Blood," Datlow writes about the horror elements so often found in stories of this type.There are many styles, voices and styles represented in this book, so I feel there is definitely something here for everyone. In "The Moon is Drowning While I Sleep," Charles de Lint weaves elements of an old English folk tale into a mythical and magical city as he explores the boundaries of dreams and reality (which are not so distinct as one might think). I found "The Frog Prince," (which deals with Freud and a frog) and "Stalking Beans" to contain elements of humor as well as fantasy. "Snow-Drop" is a wonderful retelling of the story of Snow White, while "Persimmon" retells the story of Thumbelina, but this time, with a lot more wit.There are two retellings of the stories of both Little Red Riding Hood and Rapunzel, and while both provide new and unique subject matter, both retain much from the original story, all to their credit. I especially liked Neil Gaiman's retelling of The Three Billy Goats Gruff in "The Troll Bridge." This is a dark, haunting and melancholy piece that should make any reader feel more than a touch wistful for times gone by.Not all of the stories are wistful or beautiful, though. Some do explore the darker aspects of the fairy tales most of us grew to love as children. "Puss," a retelling of the Puss in Boots story is one of them. I didn't really like this rather gruesome tale, but it does serve to round out the anthology.The most beautiful story, by far, however, is a modern retelling of "The Snow Queen" by Patricia McKillip. This story alone makes the volume well worth owning.It is obvious that Datlow and Windling set very high standards in deciding which stories to use in this volume and this is not a book for unsophisticated readers. While there were one or two stories I didn't particularly like and probably won't reread, I can't deny that they are all very well-written and present new ideas and perspectives on old fairy and folk tales.If you're an adult who simply can't get your fill of fairy tales, I would highly recommend this anthology. The writing is first-rate, the authors have remained true to the essence of the original tale while bri

Published by Thriftbooks.com User , 21 years ago
This is not the first book that Datlow and Windling have edited that I have read. The first book of theirs that I bought was "Black Swan, White Raven." I expected this book to live up to the standards set by the first book I read and I was not disappointed. It's a wonderful collection of fairy tales for adults, ranging from dark to poignant to humorous, and were frequently erotic. These fairy tales are much more satifying than the "once-upon-a-time-happily-ever-after" fairy tales that most of us were accustomed to hearing as children. It has a wide range of brilliant authors, each offering a unique perspective to different tales. It is a wonderful, well-rounded book that I was loathe to put down. If you like fairy tales, then this is a *must* for you.

Published by Thriftbooks.com User , 23 years ago
The first time I read this book, I was quite taken aback by the eroticism that threads thru nearly every story. I later returned to it, prepared, and discovered the treasure between the covers. The adaptions of the fairy tales give you real, flesh and blood characters, surprising twists, and a thoroughly satisfying read!

Published by Thriftbooks.com User , 24 years ago
The retellings of fairy tales presented here are rich, dark, and adult, inspired by the times when fairy tale princes didn't wake the sleeping beauty with a kiss. Haunting, atmospheric, unforgettable... I cannot recommend this volume too highly
Copyright © 2020 Thriftbooks.com Terms of Use | Privacy Policy | Do Not Sell My Personal Information | Accessibility Statement
ThriftBooks® and the ThriftBooks® logo are registered trademarks of Thrift Books Global, LLC