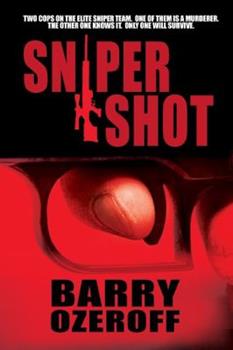 IN THE TRADITION OF BESTSELLING POLICE NOVELS BY JOSEPH WAMBAUGH TWO COPS ON THE ELITE SNIPER TEAM. ONE OF THEM IS A MURDERER. THE OTHER ONE KNOWS IT. ONLY ONE WILL SURVIVE. SNIPER?SHOT is the dramatic and suspenseful debut novel about the ongoing and potentially deadly conflict between Ben Geller, sniper on the Stratton, Oregon Special Response Team, and Bob Slater, the team's secondary sniper. Geller is the primary sniper despite Slater's superior...

Published by Thriftbooks.com User , 13 years ago
This book was very well written. The author knows his subject, but this book is not just for readers who know about sniping. This is a terrific book that keeps up a fast pace and never lets up. There is a whole lot more than sniping going on. It is a action adventure with relationship drama.

Published by Thriftbooks.com User , 16 years ago
If you ever wanted an education about te craft of being a sniper this is the book to read.Ozeroff calls upon his experience as a sniper to tell an exciting story. The sniper squad is based in Portland Oregon.Your two primary characters are Ben Geller and Bob Slater.Geller is the primary sniper despite Slater's being a world class long distance shooter.Slater lacks the discipline and character to be the primary sniper.They are both members of the Special Response Team.They are bitter rivals as well. You are taken into several sniper situations involving the two main characters.It makes for an entertaining read.You finally are taken to a showdown between the twi snipers.One of the men is honest while the other man is a theif and basically dishonest.To say the least this story has an exciting finish This is a very good book.You will enjoy reading it.

A Police and Robber Story With A Major Twist!

Published by Thriftbooks.com User , 16 years ago
Author Barry Ozeroff in his debut novel "Sniper Shot" takes the reader for a real thrill ride filled with intrigue and a series of unexpected twists. His book has all the markings of becoming a best seller. It has an intelligent plot and great characters that the author has done a good job fleshing out for the reader. This book is not filled with lots of moral messages but it is full of pure exciting entertainment adventure. This is a man's kind of book that can be read and enjoyed equally by a woman. My son is a police officer, so I had some idea of what that job is like. However, I did not have a clue as to what it might be like for officers on a special response team such as a sniper. The author writes with much authority and seems to understand the emotional liabilities that occupation might have on men under stress. The dialog is done well and does not feel contrived. This is a good old fashion adventure thriller to read and kill an afternoon or a night. Great suspense novel! A must read book! MWSA's TOP BOOK RATING - FIVE STARS! 2005 Distinguished Honor Award for the MWSA!

Published by Thriftbooks.com User , 16 years ago
I'm guilty...I spent nearly an entire day to read the entire book in one sitting. I just couldn't put the book down. While I was not too surprised by the twists and turns I was captivated by the action and the character development. I was fully engrossed by this book, so much that I had to go hug my wife several times and tell her I loved her afterwards because I felt guilty just reading about Ben's actions in this book. I felt similar to the time I watched two complete seasons of the Sopranos in one setting! Anyway, I definitely can't wait until his next book.

Published by Thriftbooks.com User , 17 years ago
Filled with suspense, electrifying human emotion, and unforseen twists and turns...I found myself incapable of putting the book down! My hat goes off to Mr. Ozeroff for a job well done on his debut novel, "Sniper Shot."
Trustpilot
Copyright © 2022 Thriftbooks.com Terms of Use | Privacy Policy | Do Not Sell or Share My Personal Information | Accessibility Statement
ThriftBooks® and the ThriftBooks® logo are registered trademarks of Thrift Books Global, LLC