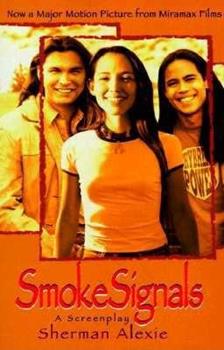 Set in Arizona, Smoke Signals is the story of two Native American boys on a journey. Victor is the stoic, handsome son of an alcoholic father who has abandoned his family. Thomas is a gregarious, goofy young man who lost both his parents in a fire at a very young age. Through storytelling, Thomas makes every effort to connect with the people around him: Victor, in contrast, uses his quiet countenance to gain strength and confidence.When Victor's estranged...

Why I use this film to teach troubled teens

Published by Thriftbooks.com User , 17 years ago
I work as a psychotherapist with adolescents and young adults. I use "Smoke Signals" with them by assigning them to rent and view the movie, which is always enjoyable because it's witty, humorous, wise, and significant. The movie poses two essential questions: 1) If someone else has mistreated, hurt, abandoned, or disrespected you, is it possible to forgive them if they've NEVER asked forgiveness, never done anything to "put it right," never returned in atonement to undo the damage, and never begtun to deserve it? And 2) if it *is* possible--and it may not be--SHOULD you? Because if you do, doesn't that just make you a willing victim by letting them "get away" with what they did, and pretending the relationship is okay again?Victor lives in the tension of this dilemma. As a 12-year-old youth, he witnessed the effects of alcohol on his family. His father vascillated between being loving and instantly "turning" to become hostile, violent, and humiliating to the young boy. Victor finds himself becoming more deeply embarrassed by his family's domestic abuse and alcohol use, even defiantly scolding his own father that his favorite Indian is "Nobody...nobody...nobody!"Victor's mother awakens the next morning to see Victor angrily smashing his father's beer bottles on the back of his father's picup truck (the two things he believes his father loves more than him), and the epiphany stuns the mother, who insists on an immediate end to family drunkenness. Proving Victor's fears true, the father--forced to choose between alcohol and family--flees the family, and never returns. It is within that unchanged arrangement that his father dies, 8 years later, having never returned home.Victor and his oddball companion Thomas make a side-splittingly funny journey south from Idaho to Phoenix together to make arrangements for the father's possessions, confronted by the racism, peculiarities, and hostilities of the non-Indian "outside" world. Thomas, having never seen the dark side of Victor's father, irritates Victor with incessant stories and tales about the dad's greatness. Victor, having been so deeply wounded and sold-out by his father's abandonment, has become tough, fierce, aggressive...and lonely. "You can't trust anyone!" he scolds. "People will walk all over you!" His mistrust poisons his friendships, family, and feelings about his father. He's become just another tough guy, hardened by family violence and substance use.In Phoenix, Victor finds an essential artifact of his father's life: a worn-out photo with "HOME" written sloppily on it. At once, Victor begins to realize that his father's fatal flaw was COWARDICE: the father could confess his sins to new companions a thousand miles from home, but could never return home and undo the damage he'd caused. And so his son has suffered for 8 years. Victor begins to realize that he himself is allowing his actions to damage others, and that it is cowardice, not manly independence, that controls his decision to rem

Is Victor sastisfied with the world.

Published by Thriftbooks.com User , 22 years ago
To me this book had an effect it showed a normal life style of an a native american instead of a regular drunk indian. This book does not hide anything it gives all expressive and shows lots of details of how the real world is.Not only is this book a reference for my class, but also a look back in my history. Victor has a mirror reflection in my life because of the way he was raised. With all the alcohol and verbal abuse it probably reflects on most peoples life, if not it will most definetly make a change in the future. Alexi is a very good writer and i hope to meet him, and i wish he can come out with another book like that.

This Screenplay Is Based On Short Stories

Published by Thriftbooks.com User , 22 years ago
It should be noted that this screenplay is drawn from Alexie's short story collection "The Lone Ranger and Tonto Fistfight in Heaven." The movie, the book and the screenplay are the work of a writer of the first water ... more power to Sherman Alexie!

Inspirational and well-done; all young men should see

Published by Thriftbooks.com User , 22 years ago
Having seen this movie as a preview on another video, the subject was intriguing. The storyline was a breath of fresh air. The unfolding of the details of the common bond the two friends shared and the understanding of the father's behavior the son came to understand following his death was superbly done.I found the constant talking of the one friend, although bordering on nerve-racking, was actually humorous in nature and the character was one to love. It was rather like Laurel & Hardy, straight and funny guy tactics, rarely seen today without one character overpowering the other.I would highly recommend this to the younger set and young adult males who are having problems with relations with their fathers.

This screenplay *makes* the movie.

Published by Thriftbooks.com User , 23 years ago
Based on his story entitled "This is what it means to say Phoenix, Arizona," Sherman Alexie's first screenplay expands, with grace and precision, the ideas presented in the short story. The movie is excellent, and the screenplay (impeccably executed by the actors/actresses) contributes to this, through both its jokes and its image-invoking monologues, which give Alexie's characters the infinite depth that, as real people, they deserve.
Copyright © 2020 Thriftbooks.com Terms of Use | Privacy Policy | Do Not Sell My Personal Information | Accessibility Statement
ThriftBooks® and the ThriftBooks® logo are registered trademarks of Thrift Books Global, LLC