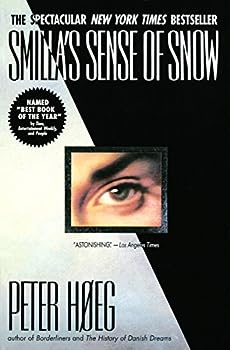 This description may be from another edition of this product. She thinks more highly of snow and ice than she does of love. She lives in a world of numbers, science and memories--a dark, exotic stranger in a strange land. And now Smilla Jaspersen is convinced...

Published by Thriftbooks.com User , 17 years ago
Even those writing laudatory reviews, here, ding this truly superior work for having a psychologically, rather than literally, explosive conclusion. I can only suggest that Hoeg is an author for whom theme is ever unfolding through his characters, and it is the characters to whom we must look here.The character of Smilla, the heroine of this novel, is developed with such nurturing and painstaking clarity and depth that she is breathtaking. She is so sharply defined that even the remarkable mystery in which we meet her becomes secondary. This book is a work of art of the highest order and it may be read for style alone.But make no mistake, this is a compelling story, which is intellectually demanding of the reader."Smilla's Sense..." is a story of the strength and determination required by social outsiders in sussing out the underlying motivations of people involved in normative systems of control, and protecting themselves from those systems and the people maintaining them. This novel is about power and survival. Like all of Hoeg's other novels, especially "Borderliners", "Smilla" takes us on a journey describing characters traveling the real and emotional dialectic of moving away from the social center as they are drawn into a deeper understanding of its aims and of its archetypes. Smilla discovers not just facts, but the mythos underlying them."Smilla's Sense of Snow" is an ontology of the marginalized psyche interlaced within a remarkable story of the lengths to which a system can be bent towards the individual ambition for power and control.I hate to make comparisons, but a good summer's serious reading list might include this novel with titles such as Morrison's "Song of Solomon", Eco's "Foucault's Pendelum" and DeLillo's "Libra".

Published by Thriftbooks.com User , 18 years ago
This is one of the most wonderful books I have ever read. Yes, Smilla is a strange woman, but perhaps no stranger than any other human being if they are truly honest with themselves. Smilla questions her own humanity and her capacity to love, but answers those doubts in her actions. It is this very honesty combined with her love of snow that makes this book so intriguing. The passages about her chidhood are quite poignant and you can really feel the little girl inside the disappointed adult remembering her mother and understand the effects of loss and cultural schizophrenia. What is most remarkable is that a man tapped so deeply into the emotions that I suspect many women feel about themselves, their childhood and their attempts at adult relationships. The ending was not so much a disappointment as a deferral, as though someone came into the room, told the writer he had to pack to leave on a UFO and had 5 minutes to write the ending. However, in his defense, I truly did not expect Smilla and the Mechanic to go home, get married and have a few kids. The period spent on the ship is more technical and not quite as emotionally intimate as the earlier chapters, and felt credibility was stretched a bit, but it was still a wonderful story.Interestingly, the temperature outside while reading this book was about 60 degrees. Despite polarfleece, heavy socks and a down comforter, I still couldn't get warm. This is a book that stays in your thoughts long after you put it down.

Published by Thriftbooks.com User , 19 years ago
I didn't read this book for a long time, because I thought that Miss Smilla sounded like Miss Marple. Boy, was I wrong. The plot starts as a fairly sedate detective story, and works its way into something like a James Bond film.Smilla is like a clever sister to Kinsey Milhone (from Sue Grafton's ABC series), gritty and always ready with a withering comment. You're right on side with her. But Smilla has greater depth.The narrative voice is superb. The book also shows an impressive mastery of a range of interesting technical topics (in this respect it reminds me of Iain Banks), many of them related to snow and ice.I felt that, occasionally, some of the links in the plot were not entirely clear, and I would probably have preferred a different ending. But these are minor comments, and I was delighted that I finally read this book.By coincidence, the book I'm currently reading is called "The Worst Journey in the World". It deals with an antarctic expedition, and I think it might complement Smilla very well.

Published by Thriftbooks.com User , 19 years ago
Peter Hoeg proves that serious literature can be both entertaining and artful. On the surface, "Smilla's Sense of Snow" is genre fiction. But dig a little deeper, and there is a character study of great sensitivity, a setting with symbolic value and profound themes about loss. Unlike other densely-plotted thrillers, this book rewards re-reading

Published by Thriftbooks.com User , 20 years ago
Smilla Jaspersen - half Dane, half Greenlander - knows, from marks left on a snow covered rooftop that her young friend, Isaiah, didn't accidentally fall to his death, as the police would prefer to believe. But they don't have Smilla's feeling for snow. The hunt for the truth leads Smilla to the icy wastes of Greenland, and the Cryolite Corporation's sixty-five-million year old secret.Despite its rather vague ending I enjoyed reading this book, with its tight, almost Iain Banks narrative style like in Complicity, and the intense viewpoint of Smilla as she tells of her search for the truth, her background, and feelings toward those she is associated with.
Copyright © 2020 Thriftbooks.com Terms of Use | Privacy Policy | Do Not Sell My Personal Information | Accessibility Statement
ThriftBooks® and the ThriftBooks® logo are registered trademarks of Thrift Books Global, LLC