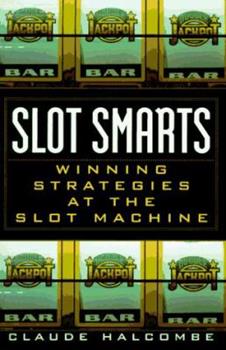 This is a paperback book in very good condition. This description may be from another edition of this product.

Published by Thriftbooks.com User , 19 years ago
I'd like to start out by thanking the author. I've been a gambler for several years, but not a very smart one. I used the - Green Plan - on quarters and it worked for me. I made a profit late in the afternoon. Had I been playing 3 quarters all along, I would have run out of money hours earlier. I'm anxious to study up on the other work plans and put them to the test.It was a new feeling for me that I was in control of the outcome much more than ever before. I recommend it for the gambler that likes to go often, but can't afford it if they lose. This way, you win a little or lose a little, and can afford to keep visiting the casino. It sure beats some of my previous strategies, like rabbits feet, wearing red and walking around an oak tree during the full moon.Thank you, Claude.

Published by Thriftbooks.com User , 22 years ago
As we say in the Old Country, this one's a "corker," a real pick-me-up and put-down "read". Good for browsing which is about all travelling slotters like me get to do en route to the next tournament. The author had won me over well before I got to his piece on slot tournaments. Beats me why others haven't woken up to that lure yet. Best of all worlds! Fun galore and somebody in the group is always guaranteed to take out the big money. Makes sense to me but then most of this book does, and for old pros like me too. After some of the junk put out by "experts" on one-armed bandits, this book sticks to reality. We all need a game plan before the money goes in AND we all need to stick to it. That makes real sense.

Easy to Read, Well Worth Trying

Published by Thriftbooks.com User , 22 years ago
Have read most books on winning at slots. They don't help much. This one has much more to offer. I'm a $$ player anyway which helps because the author insists on two coin $$ machines and a hefty start stake. I am a bit of a wanderer so I don't object to his frequent movements. Do his ideas work? I am making a better job of "managing my luck" (as he puts it) since I found this book in Atlantic City but I haven't ventured to Vegas yet where he seems to concentrate his efforts. Maybe I will go after my next big win. I've had a couple in three trips using one of his strategies and sticking to his two coiners.

Published by Thriftbooks.com User , 23 years ago
Since the slots make up the majority of opportunity to gamble in Las Vegas...it is a pleasure to see an updated (late 1990's) but not overly technical guide to what the games are and how to understand the logic behind their operation in order to "win" or at least break even. Though I have not had the full resources to completely test Mr Halcombe's methods...about 80% of the information he imparts, I have used at one point or another to wind up being considerably ahead at the dollar slots. Some of the text could have been shortened as pertains to the moral or philosophical views of slot play....but overall...an invaluable read if you are going to put even one dollar in the machines.

There is a somewhat easier way!

Published by Thriftbooks.com User , 24 years ago
The book is valuable but somewhat impractical at the level of actual play. The author provides five plans with elaborate instructions for leaving and staying and moving from one to two coins -- he advocates play on two level multipliers like Double Diamonds and Red White & Blue. In my opinion it is enough to say that if you don't make 5 units within fifteen spins you should leave. If you don't score a very good hit you should not move from one to two units. The problem I had with the author's method was that I mainly had to leave machines. That is normal. But why go through some elaborate recording of this hasty movement, as though each encounter was a session? I appreciate that the author's methods may work for him. I am not so orderly. I reached his goals quickly enough using my fifteen spin adaptation and common sense on when to double up. I coasted through the rest of the day and came home with a few hundred plus from dollar play. I welcome dialogue about this with the author or any other serious players. It is a good book but ... There is an easier way!
Copyright © 2022 Thriftbooks.com Terms of Use | Privacy Policy | Do Not Sell My Personal Information | Accessibility Statement
ThriftBooks® and the ThriftBooks® logo are registered trademarks of Thrift Books Global, LLC