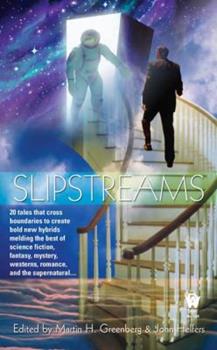 (Part of the Henry Fitzroy Series)

Imagination knows no boundaries Twenty of science fiction and fantasy's most talented authors take up a challenge: to wade into the waters of a new genre and create something utterly unique. The... This description may be from another edition of this product.

Published by Thriftbooks.com User , 16 years ago
Themed anthologies usually can't stick with their concepts, and often promote a "theme" so narrow that no stories can be found that comply with such strictures. That challenge is very noticeable in this book. One of the editors, John Helfers, attempts to make the case for an emerging genre called "slipstream" fiction. This is a pretty dubious claim, and a half-hearted attempt to find a hip new label to something that has been around for ages -cross-genre experimentation in speculative fiction. Most of the stories here can be considered experimental and even groundbreaking, but it's not exactly a bold new genre that's setting the literary world on fire. Fortunately, most of the stories in this book are enjoyable reads for speculative fiction fans. Winners include Jane Lindskold's examination of a marriage told in the form of a cookbook, Irene Radford's mix of Arthurian fantasy and Jewish theology, and Donald Bingle's combination of true crime and thought experiments in quantum physics. Several of the authors here ably mix fantasy and/or sci-fi with other genres, such as detective noir, horror, mystery, and western - and they're usually (though not always) successful at not appearing forced or contrived. Of special note for the adventurous reader is Michael M. Jones' tale of a retired Santa Claus as a self-destructive private eye, while the closer by Russell Davis is a gut-wrenching treatise on self-examination and emotional salvation. So if you're interested in modern speculative fiction, this is a mostly successful collection of strong writers and engaging stories. Just don't read too much into the concept. [~doomsdayer520~]
Trustpilot
Copyright © 2022 Thriftbooks.com Terms of Use | Privacy Policy | Do Not Sell My Personal Information | Cookie Preferences | Accessibility Statement
ThriftBooks® and the ThriftBooks® logo are registered trademarks of Thrift Books Global, LLC