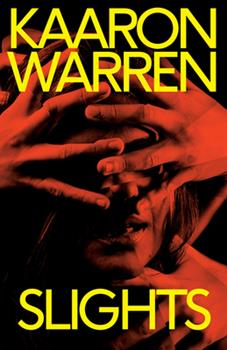 When Stevie Searle almost dies in the accident that kills her mother, she doesn't see a shining path or a golden light. Instead, she sees everyone she's ever slighted, waiting to take a piece of her in a cold, dark room. The person whose place she took in the queue, the schoolmate she cheated off, the bus driver she didn't pay? All waiting. All wanting to take their revenge when she finally crosses over. Stevie is fascinated by the dark room, so she...

Published by Thriftbooks.com User , 12 years ago
First things first, the copy of Slights that I read did not have that totally creepy cover you see above, mine was a simple black and red, with the title, author and these two statements: On the front: "The Buddhists have many different types of heaven. I wanted to explore what it was like to have many different types of Hell." On the back: "A Wasp Factory for the misery memoir generation." Sounds fascinating, but it doesn't come close to revealing just what you may find inside. Upon finishing the book and seeing the final cover I was actually quite glad to not have seen it beforehand. The main reason is because of how the book progresses in the creepy factor. It builds as you read, until you realize the horror was there all along. Slights is narrated by Stephanie, with the first chapter titled `at eighteen' and from there each chapter is told from a certain age up to her late-thirties. This format worked wonderfully, not only does the reader get to follow her life as she ages, but also gets to see how her memories and past change as she matures and thinks back on things. The entire novel is focused on Stephanie, and her family history, including parts she wasn't present for but are of much importance to her own life. Her father dying at a young age, and her mother dying from an accident which she may have caused could have been the key events that lead Stephanie to develop an unappealing fascination for death. Or maybe it's just in her blood. Either way she is determined to find out what happens when you die. Attempting suicide has helped Stephanie, in the past, to cross into the place where life and death merge, and she has come to believe that what waits for you is all those people you slight in your life. It can be someone who holds a grudge for a slight you purposely intended or even a stranger who thinks you've done them wrong. All that matters is that these people remember you as having taking advantage, or harmed them in some way. What was especially fascinating about this premise is that Stephanie also believes that people holding grudges end up in the Hells of the people they feel slighted by. So it only stands to reason that after death there are a million tiny Hells waiting for you. Another aspect that was completely baffling is that Stephanie has to be one of the most unattractive characters ever. Not in personal appearance, but in behavior, attitude, and the way she carries herself. And regardless of her what she believes may happen to people who insult others, she seems to go out of her way to be disrespectful and ignorant. However, that didn't stop me from feeling for this character - not sympathy exactly, and not really pity. I think it was more of a desire that she find what she was looking for, even if it meant her own destruction, it would have been a relief to see her find even a scrap of peace. This is by far one of the most difficult books to review, because I enjoyed it so much, and there were so many layers to the
Copyright © 2020 Thriftbooks.com Terms of Use | Privacy Policy | Do Not Sell My Personal Information | Accessibility Statement
ThriftBooks® and the ThriftBooks® logo are registered trademarks of Thrift Books Global, LLC