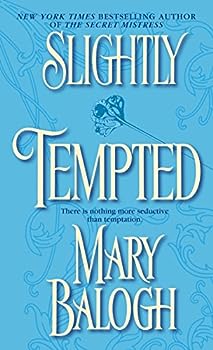 (Book #4 in the Bedwyn Saga Series)

This description may be from another edition of this product. Meet the Bedwyns--six brothers and sisters--men and women of passion and privilege, daring and sensuality. Enter their dazzling world of high society and breathtaking seduction...where each will seek...

Published by Thriftbooks.com User , 14 years ago
Mary Balogh's "Slightly" series have been variable in quality. I was rather disappointed with "Slightly Married" (Aidan), "Slightly Wicked" (Rannulf) and "Slightly Sinful" (Alleyne) but thought that "Slightly Scandalous" (Freyja) and "Slightly Dangerous" (Wulfric) were excellent. "Slightly Tempted" is the last of the Bedwyn series that I have read, although chronologically it's book 4 of the 6 (although "Sinful", Alleyne's story, occurs at the same time), and it was a really good read. "Slightly Tempted" is the story of the youngest of the Bedwyns, daughter Morgan, who is 18 and in her first season. The events take place around the battle of Waterloo and Morgan is in Brussels with her brother Alleyne and a family who are looking after her. She meets Gervase Ashford, Earl of Rosthorne, at a ball and enjoys her conversation with him. Rosthorne's personality seems rather similar to that of Joshua, Marquess of Hallmere in "Slightly Scandalous" - he's fun, witty, a rake (of course!) and yet there are deeper things going on in his character. He was banished from England 9 years before after apparently ravishing a lady neighbour who was about to be betrothed to Wulfric, Duke of Bewcastle and Morgan's brother. Rosthorne feels distinctly uncharitable towards Wulfric and when he discovers Wulfric's sister is in Brussels he resolves to get some revenge on her brother by leading her into some indiscretions. Of course his plan goes a little awry when he discovers there is more to Morgan than just being a lightweight debutante - they spend a lot of time together and his motives in spending time with her change significantly. However, when returning to England and the talk of society Morgan discovers his past and believes that all his behaviour was designed to hurt her brother Wulfric. How can Rosthorne prove his love is genuine, that he isn't guilty of the horrible event nine years before, and how can her persuade Morgan to marry him when she doesn't trust him? This book has more historical detail than a lot of Mary Balogh's other works - the setting of the Battle of Waterloo (also shared with "Slightly Sinful") is very well described. I loved the way in which Morgan mucked in with people to help treat the injured and wounded and the descriptions of the final ball before the war were very good. There are also, for those who've read "Slightly Sinful", several events that coincide and the ending of this book introduces a significant event which we read about fully in "Slightly Sinful". The main character of Morgan is interesting - she's young, brash, doesn't seem to mind too much about public opinion and sometimes seems rather uncaring about her chaperones and companions. On the other hand she's shown as truly caring for the injured after Waterloo and she works to effect forgiveness between Rosthorne and those who wronged him nine years ago. Rosthorne himself is well written although, as I mentioned above, he seems rather like Joshua Moore, Marquess of Hallm

Morgan and Gervase, sittin in a tree

Published by Thriftbooks.com User , 17 years ago
Slightly tempted? Puh-leeze. I would say that these two were far more than simply tempted. They were tantalizing with their very French waltzes, stolen kisses, embraces in the moonlight. Who knew Brussels at wartime held so much sexual tension? A sweet and saucy tale of two very different personalities, coming together to make a perfect pair. And the ending? How can Ms. Balogh leave her readers hanging that way without remorse? Oh- she KNEW we'd have to go out and get the next in the series!

Published by Thriftbooks.com User , 17 years ago
Just finished this book, and as always it was wonderful as her others in this series. Mary Balough writes original material, every single time she picks up her pen. The Bedwyn family is so interesting..each sister and brother so unique. I have to say she is one of my favorite writers, with so much story, you don't want to put the book down..and just enough sex that it is never even close to a trashy book. You just get consumed by her storie... At first I was worried about reading Morgan, she is only 18, and I usually hate reading about girls right out of the school room. But Morgan is different and the story she has taken us to, is the battle of Waterloo, so its a little Gone with the wind type romance....and how can you not love that kind of romance. OOH big thumbs up Mary Balogh.

A Great Read, Don't Miss It

Published by Thriftbooks.com User , 17 years ago
Please don't be misled by some of the previous reviews. This is a wonderful book and the author absolutely DOES NOT belabor her subject with personal opinion. I love CHARACTERS with strong opinions on war or any other subject, and I thoroughly enjoyed Ms. Balogh's latest romantic tale of the Bedwyn family. I appreciate romance novels that rise above the level of Boy Meets Girl, and this, like all of Ms. Balogh's books, is a multi-layered page turner. Though many of the characterizations are familiar to Regency readers, the depth of emotion the author is able to evoke always raises the level of the writing. Unlike some of the previous readers, I found that having much of the romance based upon events surrounding the Battle of Waterloo an enhancement of the story, and would have enjoyed reading even more about it. I would certainly expect that two characters swept up in the great event of the age would discuss the war at even greater length than they do here; and these discussions are important to both plot and the characterization of Morgan and Gervase as well as the characters around them. (For those who actually enjoy a historical background in their historical romances, another wonderful romance novel set at the Battle of Waterloo is by Georgette Heyer, entitled An Infamous Army). Characters with too many opinions??? I'm mystified. Aren't there more than enough novels with cardboard characters engaged in trivial, romantic trash talk? Since I happen to be addicted to romance novels, I treasure the ones with richness and depth. This is yet another Mary Balogh treasure.

THE BEST OF THE BEDWYNS

Published by Thriftbooks.com User , 17 years ago
WOW! Without a doubt a keeper. I know this story has been done before but Mary Balogh makes all other revenge driven plots pale in comparison. This is her best Bedwyn so far. An intelligent heroine (as the Bedwyn women are) is always a welcome addition to any book. Morgan turns out to be so much more than Gervase expects and in turn Gervase turns out to be much more complex than Morgan realizes. Both protagonists are intelligent and witty. You'll be drawn into the story almost immediately and I would bet you won't put this book down until you've finished it. But don't hurry. Savor the story since it will be awhile before MB's next installment.
Copyright © 2020 Thriftbooks.com Terms of Use | Privacy Policy | Do Not Sell My Personal Information | Accessibility Statement
ThriftBooks® and the ThriftBooks® logo are registered trademarks of Thrift Books Global, LLC