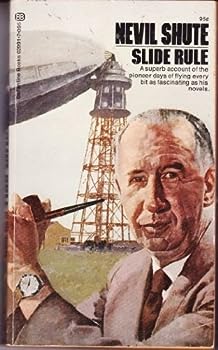 Nevil Shute Norway worked as an aeronautical engineer at Vickers before setting up his own airship company. He served in both world wars and was a commander in the Royal Navy Volunteer Reserve in... This description may be from another edition of this product.

Published by Thriftbooks.com User , 12 years ago
Neville Shute Norway is one of my two or three favorite novelists. I have worked my way through his books since I was a boy and he was still writing. He was a successful engineer and businessman and his novels have a bit of this in them. I would say that this book, and a couple of his novels, should be on every list of best conservative books. For example, in A Town Like Alice, his heroine is a young woman who decides to start a business in an tiny desolate town the Australian Outback and transforms it. Another post-war novel, Round The Bend, is the story of a young man building an air transportation business in the post-war period in the Persian Gulf region. Both are among his best and both show the demands of building your own business from scratch. This auto-biography contains many complaints about the rigidity and even cupidity of government bureaucrats. His account of how car manufacturer, Lord Nuffield, stopped making small aircraft engines in 1939 because of the stupidity of Air Ministry rules could be understood today as a contemporary story. Neville Shute tells his life story up to the beginning of the war and, as another reviewer has written, it would be nice to have a volume II about his life after the war. Several of his books, especially Most Secret, tell much of this story in fiction. After the war, he became completely disenchanted with the Labour government and emigrated to Australia. His low opinion of Labour politicians is most forcefully expressed in his fantasy novel, In the Wet, which is a prediction of life in Britain and Australia in the 1980s, 30 years after the book was written. He was too pessimistic about Britain and too optimistic about Australia but his political opinions were firmly expressed. Slide Rule is the autobiography of an aircraft engineer and businessman who happened to be a talented novelist. His books are all still in print and are read enthusiastically by fans all over the world. In his life, the reader can find many of the incidents that gave character to his novels. It is well worth reading for the fan of the novels.

A Business History From Someone Who Could Write

Published by Thriftbooks.com User , 16 years ago
Before he became a world famous novelist, Nevil Shute Norway started an aircraft company and built it up to over 1,000 staff. This was a company started in 1932 - the Great Depression. How he did that and the types of issues he faced are fascinating. His thoughts on why he choose possibly inflated figures for some of his company's assets and risked going to jail as a way to obtain financing and prevent the lay off of 500 people during the depression are very memorable. A great read.

But Still Waiting For Volume 2....

Published by Thriftbooks.com User , 18 years ago
This is a fascinating autobiography of the early life of one of Britain's premier aeronautical engineers (and adventure novelists!). Nevil Norway was closely involved in pioneering work in the airship industry (a fascinating technological dead-end) and writes with verve and authority on his experiences of starting his own airplane works (no threat to Boeing!).However, the story ends with his resignantion from Airspeed (his company) as the clouds of World War 2 are gathering. Shute Norway's later life seems to have been equally adventurous and I would dearly loved to have been able to read of his wartime experiences and his solo flight to Australia in the late 1940's.Nevertheless, this is a well written and smooth reading work which is as well crafted and entertaining as any of his novels.

A Fascinating Glimpse on the Early Aircraft Industry

Published by Thriftbooks.com User , 18 years ago
Nevil Shute's autobiography is an extraordinary work, and captures the flavor and pace of early aeronautical development, as well as the challenges of trying to gain support for the burgeoning aircraft industry in the early 1920's-late 1930's. As well, it captures the dualism of the industry: the rivalry between proponents of large airships and proponents of airplanes for the future of air transportation. It is best remembered for its frank and merciless critique of the R-100 and R-101 airship programs, and the differences between the "capitalist" R-100 (which worked) and the "socialist" R-101 (which crashed disastrously, killing almost all on board). Shute writes with authority as an insider, and with the grace that characterizes his novels. In addition to this work, I would recommend that readers also read J. P. Morpurgo's biography of Barnes Wallis (entitled simply BARNES WALLIS). Shute worked for Wallis on the R-100, and Morpurgo's book offers its own very useful insights into the great British airship rivalry. As well, readers of this work should read Shute's posthumous novel STEPHEN MORRIS which is itself a surprisingly good work (it was his first attempt at a novel), and which carries on many of the themes he explores in his autobiography SLIDE RULE. In sum, SLIDE RULE belongs on the shelf of anyone interested in the history of flight, and, particularly, anyone involved in the design and development of aircraft for commercial or military purposes. An excellent read!!!

Published by Thriftbooks.com User , 18 years ago
This book is a great read. It's Nevil Shute's non-fictional account of his years as an airplane designer prior to becoming a full time author. Over a third of the book relates his experiences as a junior engineer on the R.100 zeppelin construction project. Led by Barnes Wallis, the R.100 was built as a commercial project, simultaneously with the infamous government-designed R.101 which crashed with much loss of life on it's maiden voyage. This disaster put paid to the R.100 as well as it was never flown again.After that, he helped found the Airspeed airplane company. His tales of keeping the start-up afloat are reminiscent of many of the dot-coms during recent years.Shute writes very smoothly, and the book has the feel of a long conversation. If there's a flaw, it's that he doesn't talk much about the other people he met. It would be nice, for example, to see a few sentences on Barnes Wallis, designer of the R.100, the Lancaster bomber, and the dam busting bombs used in WW2.That said, there's plenty to read here and this is one of those books you can't put down once you start.
Trustpilot
Copyright © 2022 Thriftbooks.com Terms of Use | Privacy Policy | Do Not Sell or Share My Personal Information | Accessibility Statement
ThriftBooks® and the ThriftBooks® logo are registered trademarks of Thrift Books Global, LLC