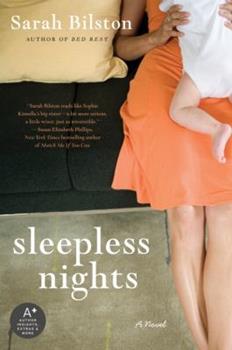 It's all over but the crying

Published by Thriftbooks.com User , 12 years ago
A nice return to Q's life after her story in Bed Rest. (and a little less Rear Window-ish too!) Sleepless Nights actually bounces between both Q and her sister Jeanie, who has come to the States for a long visit, presumably to help care for the baby. However, baby Samuel is a handful, colic and all leaving Q. to wonder at the next step in her career. Both she and her hubby Tom have some decisions to make about the community in which they'd like to live. Bilston does a great job making the novel timely, both of their high powered NY attorney firms are facing struggles and layoffs in the fact of the present economy.

their Wall St. kingdom for a good night's sleep

Published by Thriftbooks.com User , 12 years ago
Tom and British expatriate Quinn are ecstatic over her pregnancy and the birth of their first child Samuel. The Wall St. legal duo feels their life is perfect. Then Samuel comes home. The baby does not sleep at night howling louder than a banshee; which means his parents also do not sleep at night. They are learning first-hand how a colicky infant leads to cranky parents as their lives are being nuked while they cannot afford much time away from Wall St. at a time when recession requires more work from those still employed. Their friend Paul allows Tom and Q to use his Connecticut getaway home while Q's younger sister, Jeanie baby sits, giving her a temporary place to sleep as she remains unemployed. Tom and Q consider buying the small-town law practice of Kent, who is on a 24/7 drinking binge. The married couple takes over advising Kent's client, financially strapped Emmie who is in a custody battle with her former husband Ryan; infamously known for domestic abuse, but connected with the cops and the medical community on his side. He possesses insider information on the death of her other child Angela (from another father). The married legal eagles learn Angela's doctor prescribed aspirin for the child; a medicine linked to Reyes syndrome, but collusion hinders their efforts to make their case. The fun in this thriller is the baby nuking the well being of his parents with his colicky non-sleep. The legal and secondary romantic subplots go as expected, but Samuel refreshes the story line as it hard to defend a client against an influential adversary on no sleep; tired, irritable, and anxious are just a few adjectives. The sequel to BED REST is an engaging tale as QT stands for quality time defined as giving up their Wall St. kingdom for a good night's sleep. Harriet Klausner
Trustpilot
Copyright © 2022 Thriftbooks.com Terms of Use | Privacy Policy | Do Not Sell My Personal Information | Accessibility Statement
ThriftBooks® and the ThriftBooks® logo are registered trademarks of Thrift Books Global, LLC