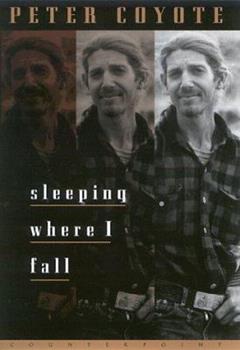 Sleeping Where I Fall: A Chronicle

In this intelligent memoir, Peter Coyote relives his ride through the heart of the counterculture--a journey that took him from the quiet rooms of privilege in New York to the riotous political street theater in San Francisco. Chronicling the revolutionary theories of the Diggers and the encampments of the extended Free Family, Coyote offers blunt and affectionate portraits of friends, lovers, and fellow travelers. In prose that is graphic and unsentimental,...

The Voice of Coyote

Published by Thriftbooks.com User , 14 years ago
Peter Coyote, was that incredibly cool "older brother", born just in time "to do" the sixties in all its guts and glory, that later generations would look back on with envy. Tall, dark, handsome and talented Coyote (are you really surprised that's not his real name) from out east lands smack dab in the heart of San Francisco just at the moment when the town is experiencing the labor pains that will soon give birth to hippiedom. We begin the journey of the sixties when Coyote was a twenty-something grad student sharing digs with the daughter of legendary Americana painter, Thomas Hart Benton, and continue to watch in fascination as he becomes an active participant in street theater, the Diggers (a band of revolutionary artists), the drug scene of Haight-Ashbury, radical politics, commune life and a lover to many lovely young women. Coyote and his friends drifted outside their urban existence when they took to the road like modern day gypsies in a beat up school bus carrying their caravan into the wilderness. It is there that they attempted to build a walden pond utopia in northern California; shooting and growing their own food, making their own clothes and birthing & raising the next generation, on a rustic farm. In his tell-it-like-it-was warts and all style, Coyote depicts how the unhygenic conditions they lived in lead to a bout with hepatitis and his baby daughter getting sick from eating dirt from the ground. Despite that rough road of youth, Coyote came out alive, and with his political & social beliefs mostly intact. Unlike many who never made the journey back from their drug addled and counter-culture adventures, Coyote, has made hay with the 2nd half of his life as an actor, political activist and can stake a claim to one of the most recognized voices in commercial television, audio and documentary narrations. Oh yes, and he can write.

Best Book On The Counter Culture

Published by Thriftbooks.com User , 16 years ago
At 60 years of age, I came up through the whole phenomenon of the 60's/70's and it was a hoot. One of my hobbies is reading books about the era, partly from nostalgia, but also to gain a better perspective on a very important part of my life. Coyote's book is the best that I have read on the subject. He was in the very epicenter of what was happening and gives a riveting account of the scene. If you are interested in the subject, start here and after you have read a number of books on this topic, I think that you will agree with me. If there is a better book on the 60's, and I doubt that there is, I want to know about it.

Wonderful In Spite of It All

Published by Thriftbooks.com User , 20 years ago
I've read other reviewers taking Peter Coyote to task for writing what they seem to think is just a self-congratulatory puff piece to satisfy his own ego. I disagree. Not once in the book did I ever see him claim that the existence he and his friends lived was the 'only' way or the 'best' way, nor did he try to make himself out to be some kind of faultless angel who never made a mistake. He simply told, in as straightforward and unembellished a way as possible, what happened in his own personal experience, good and bad, and described the process that took him from one stage of existence to another. That kind of honesty takes courage few of us can claim to have in any level of our lives.And anyone who was as heavily into drugs as he was to have survived at all, not to mention completely turning their life around and becoming successful in their own chosen field, should be congratulated. I've known enough people in my own experience who didn't, and I grieve for them to this day.I, for one, am very glad he wrote this book. In 1964 I was only twelve years old and have always felt a bit cheated that I was just too young to have been a part of what I felt even then to be a special and perhaps irreplaceable time. Reading "Sleeping Where I Fall" has given me a sense of almost having been there myself which I've never gotten from any other work on the era in quite the same way. Thank you for writing this memoir, Peter. I do sincerely appreciate it.

Published by Thriftbooks.com User , 22 years ago
It's difficult for me to rate this book - difficult for me to read it without crying. Although Peter's story wasn't my story, it was close enough for me to take it extremely personally. His time was my time, even though it took us in far different directions professionally.I thought there were problems with the story: The writing seemed amateurish at times, and there were certain logical conflicts. For instance: I had trouble with why, if the vehicles were so lovingly taken care of, they were always breaking down; or how Peter could descend into a cold-call investment scheme. These things lead me to believe there was more to the story than was being told. Based on what I read, I perceive that Peter didn't (and perhaps doesn't) know himself quite as well as he thought he did.From the read, it is never clear what kind of world the "Hippies" (for lack of a better word) thought was better. And am I supposed to believe that Heroin was going to make me a better parent? With all the discourse about how this or that action was either for or against the group goals, it's hard for me to justify on any level how drugs could be considered a positive thing. In many ways, Peter and his associates were still tightly attached to the main stream - more resembling a flock of refugees, than delegates of an alternative path. Much like reading Carlos Casteneda's "Teachings of Don Juan," I became very frustrated at times, waiting for Peter to wake up and see what was standing right before his eyes.What were the positive things this movement had to offer, and how have they influenced, say, my life?One thing that serves to separate us from the preceding generation is a distrust of the status quo, gained largely due to the Viet Nam debacle. Since that time, I haven't seen or heard one thing that would lead me to believe that those in the high echelons of government are anything other than pathological liars. But it wasn't the Hippie movement per se that set me free. It was books like "The Pentagon Papers", and other literary tidbits from disaffected insiders. And although I found something of an identity from the counter-cultural movements of that time, I never ended up swallowing their view of the universe either. It's easy, though, to imagine that, without the counter-culture, most of this information would never have seen the light of day. Over time, I did come to see that there are many world views, and ultimately this was a vital step on the road to my present philosophy. The environmental issues, so plainly evoked in this book, were representative of the opening skermishes of a paradigm shift that (hopefully) continues to this day. My pet peeve, population, wasn't addressed in this accounting, even though it was a profound discovery of that time as well. I was surprised it wasn't brought out more, although it has occured to me that Peter and his cohorts may not have dealt with it at the time.Despite all my b

A RECOLLECTION OF THE FUTURE TRIP

Published by Thriftbooks.com User , 24 years ago
Several summers ago I began to notice that teenagers were dressing like hippies of the 60's. It made me wonder why the Hippie movement had "failed" and why it was again resurfacing, even if only in costume. Peter Coyote offers some interesting insight.Today there is a GAP in the Haight; Peter Coyote takes us back to when there was a Free Store there, and discusses its implications. He makes us a part of the experience with his lucid prose and reflective thoughts about a magical time. Mixing his personal experiences with reflective commentary, he presents it warts and all. Besides offering a plethora sixties sex stories for the mass market, Coyote offers some valuable ideas to ponder as well. There are stories of encounters with the Hopi, who had actually managed to accomplish what the Hippies were trying to do. Stories culled from a diary that still sparkle with the verve of the time. There are stories of how communal life brought comfort and pain, and of how one can more than survive without money or a job, but not without a role to play.The highlight of the book is an idea Noah Purifoy suggested for problem solving, an artistic approach, an "antipodal shifting between the realms of logic and intuition," the core of the creative process and a problem solving mechanism of the highest order. Coyote shows how it was used during his tenure on the California Arts Council. This idea deserves a book of its own.The reason Peter Coyote's book is so timely and important is because we are about to reenter that time once again, but this time more as Hopi than as Hippie. The Global Village (WEB) has placed the entire world in communal proximity, and the unresolved problems of the Hippie experience will be the problems of the Internet Generation. It is the problem of the Hopi's prophetic sign that, "Spider woman will have covered the world with her web."Now that Communism has fallen, can Capitalism be far behind? "Capitalism is dying, boy." Wall Street financier Morris Cohon tells his Hippie son Peter Coyote, "It's dying of its own internal contradictions." He predicts it will take 50 years and not the 5 his son thinks. Morris was probably right, and that is what makes this book significant. The book offers us a look at our first step in the tribal direction. The Hippies didn't "fail," instead, they just saw it first and got started sooner than the rest, just like all artists do.For the nostalgic, it is a trip back to a bygone time. For the aware, it is a preliminary discussion about the trip of our future civilization. Take your pick, it's your trip to take.
Trustpilot
Copyright © 2022 Thriftbooks.com Terms of Use | Privacy Policy | Do Not Sell My Personal Information | Cookie Preferences | Accessibility Statement
ThriftBooks® and the ThriftBooks® logo are registered trademarks of Thrift Books Global, LLC