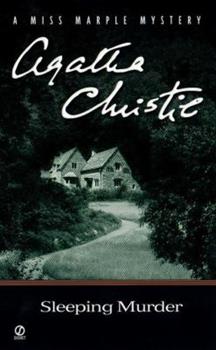 by Agatha Christie and Dave Williams

Miss Marple discovers what makes a house a home-to murder... Gwenda Reed's new home, a charming Victorian villa, is giving the lovely new bride the strangest feeling of d?j? vu-and an unnatural dread that's taking its toll. But how can her husband's aunt, Miss Marple, solve a mystery such as this when the only clues are those in Gwenda's vivid imagination?

Published by Thriftbooks.com User , 20 years ago
Of all the Agatha Christie books I have read, the characters and plot of Sleeping Murder are by far the most interesting of them all. Gwenda and Giles Reed are two bright-eyed New Zealand newlyweds looking for their first home in England--what they find in the house is an eerie familiarity and a haunting past. When the couple moves into their new home, Gwenda has strange feelings of deja vu. She has dreams of a woman strangled in the hall and she feels a certain aura of murder in the air. Miss Jane Marple tells Gwenda to "let sleeping murder lie", but she insists on thoroughly investigating the history behind her haunted house. This book was extremely intriguing and continuously kept me on the edge of my seat. It is most definitely a page-turner and the suspense and plot twists add even more variation and intrigue to what I feel is one of Agatha Christie's best mysteries.

Published by Thriftbooks.com User , 21 years ago
Gwenda and Giles Reed surely must be ranked as two of Agatha Christie's most endearing characters. Too bad they didn't have their own series like Tommy and Tuppence. As young newlyweds fresh from New Zealand, they come to Giles native England looking for their first home. Gwenda is immediately captivated by a Victorian villa known as Hillside, but after she moves in, strange feelings of deja vu grip the young bride. Has she been here before? Is the house haunted? And who is the woman she can see lying strangled in the front hall? Refusing the advice of kindly Jane Marple to let sleeping murder lie, Gwenda and Giles embark on an investigation to clear up the alleged murder of Gwenda's stepmother and put to rest her eerie feelings that her own father may have been the killer. As memories of past events flash through her mind, she and and her husband chase a trail of clues involving letters from abroad, a retired doctor, a former housemaid, a jilted boyfriend, and a mysteriously torn tennis net. Miss Marple is at the peak of her powers as she helps the couple unravel the clues and see clearly what is right before them. "It really is very dangerous to believe people, " she informs them. "I never have for years." But you can believe that when Miss Marple is present, the plot is thick with excitement, red herrings, and her uncanny ability to read human nature. Perhaps the best of the Miss Marple series, this is a fitting farewell to Christie's universally beloved spinster.In 1987, an excellent adaptation of this novel was filmed for TV with Joan Hickson portraying Jane Marple.

Published by Thriftbooks.com User , 22 years ago
This was definitely not the first Agatha Christie book I ever read and I know it won't be the last. But it was the first one that made me realize just what a talented writer she was. All the others I had read began to run together in my mind over the years, but with this one I still remembered "who done it" YEARS later. I'll never forget! It was also the first time that the main character, Gwennie in this book, seemed like someone who could have existed outside of Agatha's head. From the moment I picked this book up, I was good and hooked. I finished it in one sitting because I had to know what was happening to Gwennie. It remimded me a little of the movie Gaslight. You just KNOW that there is more going on than anyone is aware of. If you've never read an Agatha Christie book before, this is the perfect place to start. If you have read her, but not this particular book, don't wait any longer. You'll never regret it.

Published by Thriftbooks.com User , 23 years ago
OK, you want a good book, like the kind you can't put down?? Well this is it!! Agatha Christy portrays the setting and unravels the plot in the most intriguing way! The ending is totally unexpected. I couldnt put this book down over the summer, it was wonderful, i recomend it 100%!!
Trustpilot
Copyright © 2022 Thriftbooks.com Terms of Use | Privacy Policy | Do Not Sell or Share My Personal Information | Accessibility Statement
ThriftBooks® and the ThriftBooks® logo are registered trademarks of Thrift Books Global, LLC