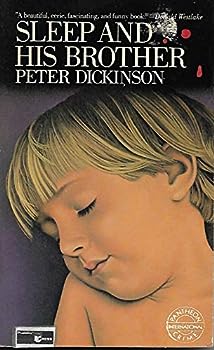 Sleep and His Brother

(Book #4 in the Jimmy Pibble Series)

This description may be from another edition of this product. A strange malady afflicts the children of McNair House in this British mystery featuring former Scotland Yard superintendent James Pibble, from CWA Gold Dagger winner Peter Dickinson Recently given...

Published by Thriftbooks.com User , 12 years ago
As best I can figure out Cathypnic is a real word--the reference aside from this book has something about cathypnic reactions in opthamology, e.g., "immobile contraction of the pupil identical with cathypnic contraction." I had no luck on etymology, though. But I doubt if there really is a hereditary disease that makes children psychic for as long as they are alive and mobile, not asleep or in something like a coma. And Jimmy Pibble seems to be viewed by his bosses as the equivalent of an incompetent Columbo, the guy to send in when they don't want anything discovered. Mind you, he's got a pretty good record after everything shakes out. I think that there are a small handful of Jimmy Pibble mysteries. Which does make for peculiar reading. I first ran into it sometime in the 80's, I expect, and I'm rereading it now. So, even back at first reading, I thought it was half-way to some kind of science fiction. How did Dickinson create this universe, with the children the two doctors and Jimmy Pibble. For me,it works as a story as well.
Copyright © 2020 Thriftbooks.com Terms of Use | Privacy Policy | Do Not Sell My Personal Information | Accessibility Statement
ThriftBooks® and the ThriftBooks® logo are registered trademarks of Thrift Books Global, LLC