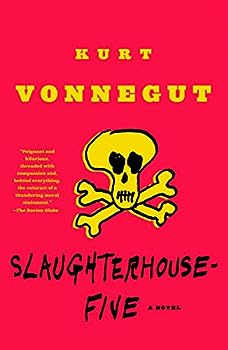 Kurt Vonnegut's masterpiece, Slaughterhouse-Five is "a desperate, painfully honest attempt to confront the monstrous crimes of the twentieth century" (Time). Selected by the Modern Library as one of... This description may be from another edition of this product.

Published by jollina , 1 month ago
I came across so many reviews about PARAGON CREDIT SOLUTION for the great job they are doing. And I was very need of a good hacking company to help Me and my husband fix our credit. 4 years ago we messed up to credit report due to low income. I contacted them on there email address , and they ask us for the necessary information and promise to get job within maximum of 6 days. To our greatest surprise in less than 5 working days they remove all negative items and also raise our credit score to 806 across board. You can contact them on paragoncreditsolution@gmail.com . They are the best hacking company I have came across.

Published by Jeff , 1 month ago
Powerful statement against war. Not sure the whole Trafalmadore-time travel aspect is necessary even though it is unique. “So it goes” is repetitive to the point of being irritating. Decent but no masterpiece.

Published by Jill , 2 months ago
I wanted to read some of the great lit and I wasnt disappointed. Easy to get into and I finished it in less than a week. It is a smaller book but I couldnt put it down.

Published by Atlas , 3 months ago
The condition of the book was alright. It did have some writing on it, including on the jacket, and lots of underlining but it is still legible. I did not get the cover advertised but it's not too big of an issue.

Book is great, however is not in very good condition

Published by Alexandra Gobble , 11 months ago
The book itself is wonderful, I’ve read it before and great to read it again. I ordered a copy that was supposed to be in very good condition but it isn’t so. There is very heavy use of highlighter markings and many notes scribbled in the margins. About as marked up as I would expect in an acceptable or heavily used copy. It’s distracting for me so I always buy books in very good or like new condition but this one missed the mark.

A little confusing but eye-opening nonetheless

Published by AddyDaddy , 2 years ago
When I began reading this book up until the end I was thrown off by the different characters, POVs and general plot of the book. Billy Pilgrim is an endearing character with lots of eye-opening texts and views of the world. But nonetheless, I was jerked around every time he would "travel" in time and even more so when Kurt would use his own voice in the book. But if you're looking for a book that gives you a new perspective on life and death and the meaning we give to those terms and concepts this book may be for you. I know I gained a lot of perspectives reading it - especially having experienced a death during the time I read this book.

Published by Mlove221 , 2 years ago
Vonnegut tells his tales through time breaks and dream sequences that flow seamlessly together to create a trippy and fun journey through the life of the main character. While he's exploring another planet or enduring war, Vonnegut writes a fascinating and thought-provoking look at what makes us human and what makes life worth living. It's a classic read and a fun ride.

An amazing journey through space and time

Published by Thriftbooks.com User , 20 years ago
Kurt Vonnegut's novel "Slaughterhouse Five" is one of those great books that defies easy classification. A blend of science fiction, satire, and war fiction, it is both fun and grim. The book tells the story of Billy Pilgrim, an optometrist, World War II veteran, and apparent UFO abductee who becomes "unstuck in time." We accompany Billy back and forth from his wartime experiences to his encounters with aliens and to other events in his remarkable life."Slaughterhouse" is greatly enlivened by a colorful, richly imagined cast of supporting characters: American-turned-Nazi Howard W. Campbell, movie star Montana Wildhack, and more. But probably the most resonant of these amazing creations is Kilgore Trout, the underappreciated science fiction writer.The book has an intriguing structure. Vonnegut's prose is a joy to experience: he combines a sort of Hemingwayesque simplicity with a knack for rendering startling, and often ridiculous, details. He is often very ironic and funny. Along the way, he explores ideas about free will and the nature of time. Much of the book is about writing itself.In this book there is an intriguing reference to Stephen Crane's classic "The Red Badge of Courage"; perhaps this reference is Vonnegut's way of directly connecting with the tradition of American war fiction. But this book transcends that genre. "Slaughterhouse Five" is sad, surreal, whimsical, brutal, and oddly gentle. It's a remarkable book; I highly recommend it. As an interesting companion text, try "The Things They Carried," Tim O'Brien's excellent book about the Vietnam War.

Essential in many ways

Published by Thriftbooks.com User , 22 years ago
This novel is essential in many ways. It is undoubtedly one of the best-written, most well respected novels of the 20th century (No. 6 on the list that was a compilation of all the other lists) and is, therefore, essential to your understanding of 20th century fiction. If you have never read Vonnegut, this book should be the first one you read: it is the most famous and one of the best and really captures the essence of Vonnegut. Finally, despite its literary merit, this is a FUN book to read. You will laugh, you will think, but, most of all, you will enjoy reading it and you will finish it FAST.This should be your introduction to Vonnegut. I've found that true Vonnegut fans don't often choose Slaughterhouse-Five as their favorite, but, instead choose one of Vonnegut's other wonders (Breakfast of Champions, Cat's Cradle, Sirens of Titan, etc.). I think that most would agree that this is a good jumping off point, just as, in music, people often start with Greatest hits albums and then work from there.Only Vonnegut could make such a strange premise believable and emotional. The book shifts time and place from paragraph to paragraph without warning. It is about aliens and WWII. It all works so perfectly, however and is so profound to those who read carefully. Billy Pilgrim is one of the great characters in all of literature.Don't be scared off by aliens and the weird premise. It works better than 99% of so-called "normal" books. Absolutely ESSENTIAL.thanks {{{milo}}}

Aliens and Predestination? Oh My!!!

Published by Thriftbooks.com User , 23 years ago
Kurt Vonnegut creates an intricate and creative story of science fiction while still writing an anti-war novel. " Slaughterhouse-Five " focuses on an incredibly silly character named Billy Pilgrim. After a series of tragic events, aliens called Tralfamadorians abduct Pilgrim. These aliens have the ability to travel to any moment in time whenever they wish. They teach Pilgrim how to travel through time and we find him constantly traveling back and forth through his own life at random. We find Pilgrim one moment reliving the firebombing of Dresden and on the very next page teeing off at a country club ten years later. Incidents exactly like this can be found adorned through the book along with Vonnegut's distinct wit and black humor. One of the stronger points in the book deals with free will and predestination. Billy Pilgrim and the aliens believe that everyone's life is set in stone and everything that we do was destined to happen. One Tralfamadorian tells Pilgrim, I've visited thirty-one inhabited planets in the universe, and I have studied reports on one hundred more. Only on Earth is there any talk of free will." If such a thing were true then obviously the notion of free will is nothing more than human imagination used to fool ourselves. Thought provoking subjects such as this grab the reader's attention and never lets go. Although the writing style is a bit strange and takes time to get used to, Vonnegut manages to weave an intricately detailed world of laughter, war horrors, and moral issues. Slaughterhouse-Five is a truly creative and incredibly entertaining read which comes highly recommended.

Slaughterhouse-Five, or The Children's Crusade: A Duty-Dance with Death Mentions in Our Blog 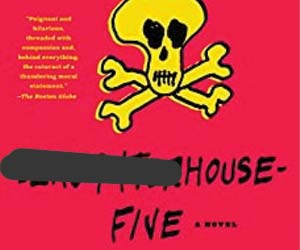