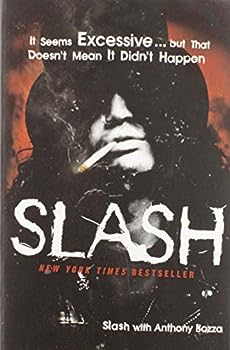 by Anthony Bozza and Slash

This description may be from another edition of this product. From one of the greatest rock guitarists of our era comes a memoir that redefines sex, drugs, and rock 'n' roll. For the first time ever, Slash tells the tale that has yet to be told from the inside:...

Candid version of how he saw things go down

Published by Thriftbooks.com User , 12 years ago
I was surprised to see that Slash had written a book given a huge part of his mistique was how reserved he was. He said everything he wanted to through his music, so alot was left to speculations and the opinions of other people. I found myself unable to put it down and would get upset whenever my subway stop was approaching because that meant i would have to pick it back up at the end of the day (and trust me, most New Yorkers want to get out of the subway as soon as they possibly can). It was a moving, exciting and most of all an enlightening book to read. My life style is the complete opposite of Slash's but somehow i found i could relate to him. Its not a book for the judgemental kind. It's his version of how things happened and should be respected as such.

I loved this book! And for those knocking it, give me a break.

Published by Thriftbooks.com User , 13 years ago
As a 21 year old music fanatic, I've just recently become infatuated with GN'R, and especially Slash. (I was only a year old when Appetite for Destruction was released.) I found this book to be really entertaining, and though it's 480 pages long, I read it relatively quickly and was sad to reach the end. It was really interesting to find out about Slash's background, his personal life, what exactly happened with GN'R, and Velvet Revolver. I've read through a couple of the other reviews, and it's weird that some people are complaining that this book sounds like it wasn't written by Slash because it uses bigger words at times, while others say that it seems like it was written by a high schooler. (Just a bit contradictory!) I've watched and heard a ton of interviews with Slash, and I don't find it too hard to imagine that he wrote most of this. Besides, when most people sit down to write a book, or even a paper, they don't write exactly the way they normally speak. I don't understand why it's a big deal. I don't think any of it takes away from the content. People seem quick to call him an idiot who can't string together a sentence, but from what I've seen, he's just as capable of speaking coherently as anyone else. I think some people may have had preconceived notions about the book and some kind of bitterness toward him before they even started reading it. The other thing is that people complain that all rockstars' lives sound the same - drug usage, alcohol, sex, etc. To that I say, if you're sick of reading stories about those things, don't read anymore rockstar (auto)biographies. What did you expect? Personally, I find all of those stories highly amusing because his life is the opposite of mine, and at one time or another, we all fantasize about being a rockstar. This book is just fun, and I don't think people should be so critical about the little things. I'm sure Slash didn't intend this book to be a piece of high art, but rather to tell his story and to answer all of the questions that people have been asking him for years. One last thing... The pictures in this book are also very cool, and there are pages of color photos in the middle of the book. Also, if you're really into the music, the way he describes how certain songs were made will make you want to listen to them over again with attention to details you might have not heard before!

Published by Thriftbooks.com User , 13 years ago
This is the usual dope fiend, rock n' roll guitar player's story. Drink the usual half gallon of booze, load up with coke and heroin, hallucinate, run around looking for the little green men with a gun and passout. Then he starts that round all over again the next day. However, it is an unbelievably good read and is well-written. Slash and Nikki Sixx are brothers of the drug world and experienced the same drug induced nightmares. I first read the Heroin Diaries by Nikki and then Slash. How either one of these guys are still alive I do not know. The book flows with good stories and Slash does not leave any of the gory stuff out. I highly recommend it if you want to know everything about Slash from his childhood to the Guns N' Roses era to the present with nothing left out. You will not be disappointed.

Published by Thriftbooks.com User , 13 years ago
The story of Guns N' Roses is one of the most controversial in rock n' roll history. GNR has had a famously terse relationship with journalists and authors, and in recent years, former band members have publicly disagreed about the "real story" in the press. The band even threatened bodily harm to journalists in the lyrics of the Use Your Illusion albums! For the first time ever, someone on the inside has gone on record with to describe the genesis of the band, how they wrote and performed one of the most definitive rock albums of all time, the changes in the band's lineup, and finally, the implosion of all things GNR related. Who knew it would be the notoriously private lead guitarist, a soft-spoken man hidden behind a famous mop of hair, who would step up and tell the story? Slash's memoir is the diary of a dope fiend (released a month after the autobiography of his friend and former heroin-buddy Nikki Sixx). Well, the diary of a dope-, and women- and coke- and crack- and alcohol-fiend. Have anything else debaucherous? The late 1980's and 1990's Slash would have tried it for sure. During one cocaine-induced hallucination of an attack by blue-gray Predator-like creatures with machine guns, Slash punched out his glass shower door and ran naked into the streets in terror. The incident got Slash into rehab, but no sooner than his limo driver picked up the "cured" ax man, he was downing half a liter of vodka in the backseat. What doesn't Slash want to talk about? Well, don't bother asking if GNR is getting back together (I'm not even going to acknowledge the current faux-lineup). Slash says it won't happen, ever. The ten-years-delayed release of Axl's Chinese Democracy album? Slash gets asked that question in every interview, and he leaves it out of his memoir. In an interview about the book, Slash stated "Axl works in a different time zone than I do. So what may seem like a long time to other people is a tick of the clock to him. It'll come out, though. It will." Even Axl's famous tour cancellations and delays are treated matter-of-factly--Slash doesn't attempt to analyze or explain the behavior of his bandmate, nor does he seethe with anger or resentment. Others have tried to write the history of the band, but most are hacks or fanboys who strung together quotes from numerous previously published sources. Before Slash spoke up, the only other worthwhile title was rock journalist Mick Wall's The Most Dangerous Band in the World (1992), and the VH1 Behind the Music production (2004). Thank you, Slash, for letting all rock fans into the inner world of GNR, featuring your toxic twin Steven, current bandmate and forever friend Duff, the laid-back and gifted Izzy, and the enigmatic Axl. You've treated the story with humor, candor, honesty, self-reflection, and respect, even for those from whom you are currently estranged.

Guitar God tells some but probably not all

Published by Thriftbooks.com User , 13 years ago
Better written than I would have expected, interesting and informative about GNR and his life. What really makes this so much different from Eric Clapton's book or Nikki Sixx's trip through the hell of his own mind is that Slash never seems to have been unhappy or angry to have regrets. He did all the drugs, alcohol and sex for fun and because he is easily bored. This makes the book much more fun for the reader. Is he being truthful, private or shallow? Hard to say, but you can also see how he must have helped drive Axl crazy. On the other hand you can see that Slash would have been happier if he had a front man who wanted to tour all the time.
Copyright © 2020 Thriftbooks.com Terms of Use | Privacy Policy | Do Not Sell My Personal Information | Accessibility Statement
ThriftBooks® and the ThriftBooks® logo are registered trademarks of Thrift Books Global, LLC