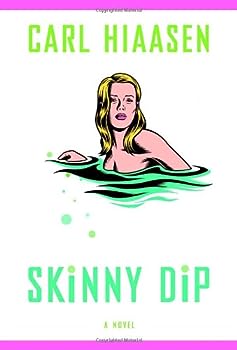 Chaz Perrone may care more about Hummers than hammerheads, but he's done pretty well for himself as a marine biologist, doctoring water samples so that an agribusiness tycoon can continue dumping... This description may be from another edition of this product.

This book will make you want more Hiaasen!

Published by OldBob22 , 1 year ago
Carl Hiaasen’s stories are so involved and sometimes convoluted, you wonder how all of the sub-plots can ever be resolved. Carl always pulls things together, despite all the twists and turns. He is a great storyteller!

Demented, Delightful Hiaasen At His Best

Published by Thriftbooks.com User , 16 years ago
One of the best of Hiaasen's tragicomic South Florida capers. This time around, Hiaasen's gallery of grotesques and eccentrics includes a couple of return appearances: retired / disabled investigator and island-dwelling loner Mick Shanahan (last seen in Skin Tight) plays an important role, and even the ever-recurring Skink, former Florida governor and current Everglades-dwelling, roadkill-eating wingnut, makes a couple of cameos. Add to these the corrupt and murderous, outlandishly oversexed, but comically incompetent, wildlife biologist Chaz Perrone; the brutish and bizarrely hirsute thug Tool, who unexpectedly feels pangs of conscience; the politically super-connected agricultural mogul and eco-villain Red Hammernut, who doesn't; a Columbo from Minnesota who is given exactly a week to solve a murder; a couple of murder victims who won't die; a couple of pythons that terrorize housepets; a blackmail scheme involving a fake will, a fake funeral, and a sheep-farmer from New Zealand -- well, it's all pretty nuts. It's also a lot of fun, and it's vintage Hiaasen. Enjoy. As always with Hiaasen, underneath the laughs here are a lot of anger and sadness. He makes the reader uneasy about the fate of our rapidly disappearing wilderness. His usual culprits are land developers, corrupt politicians and judges, carpetbaggers, and sometimes, promoters and tourists (e.g., Tourist Season). This time, he skewers as corrupted by corporate greed the scientific establishment that supposedly is trying to save what little is left of the Everglades. Let's hope his books awaken some sense of urgency or shame in the powers that be. On the other hand, let's not hold our breaths.

Published by Thriftbooks.com User , 17 years ago
My first book by Hiaasen and it won't be my last. I read this in a day and a half. It had me laughing out loud too and hard to put down. Even the poor hapless perp turned victam Chaz had a warped sense of humor. Everyone got their just desserts.

DON'T read this on your honeymoon! ;-)

Published by Thriftbooks.com User , 17 years ago
In Skinny Dip, Carl Hiassen creates incredibly complex characters with borderline-ludicrous circumstances and somehow manages to weave them into a completely believable and throughly entertaining story. Chaz Perrone is a truly despicable and yet totally un-fearsome individual. Joey Perrone is a fearless heroine, yet driven by questions of her own personal worth after her failed marriage. Mick Stranahan is a do-gooder ex-cop who's a little too good at blackmail and Charleton Heston impressions... Add in the sultry Palm Beach/Miami backdrop, an ever-twisting plot, and some ripped-from-the-headlines environmental debauchery, and it makes for one of the best reads I've come across in at least a year! This was my first crack at a Hiaasen novel, but being a current South Florida resident, I figured it was my duty. I packed his latest work as my beach book, and set off on my honeymoon. And although I absolutely LOVED this hysterical romp through sunny places and shady characters, I do have to suggest that you recent brides out there wait until after the honeymoon... I literally couldn't put it down, which was a little bit irritating to my new husband for the two days that I spent tearing through it!! ;-)

AN IRESISTIBLE BLEND OF MIRTH AND MURDER

Published by Thriftbooks.com User , 17 years ago
Carl Hiaasen's tenth foray into an irresistible blend of mirth and murder is emblematic of his previous work (Sick Puppy, Lucky You, Strip Tease, Stormy Weather, Basket Case). In other words, Skinny Dip is a doozy! Satire, suspense and laugh out loud outre characters are this author's forte - lucky for us. Reminiscent of moonlight over Miami our story opens on a cruise ship. Joey Perrone and her husband of two years, Chaz, are celebrating their anniversary on the Sun Duchess from out of Port Everglades bound for Puerto Rico, Nassau, and a private Bahamian island owned by the cruise ship company. Their voyage had a less than auspicious beginning as it was delayed for three hours because an angry raccoon was loose in the pastry kitchen. Once the varmint was dispatched they were off - and so was Joey. After filling his wife's wine glass four time at dinner Chaz suggested a romantic stroll on deck. Their walk was short as once by the rail he pretended to drop their stateroom key. Bending over he didn't find the key but Joey's ankles which he grabbed, upending her into the black Atlantic. As Joey (former champion swimmer at UCLA) fought the waves she thought, "I had a feeling he didn't love me anymore, but this is ridiculous." Now, this is a girl who comes from sturdy stock. Her parents, Hank and Lana Wheeler, ran a casino resort in Nevada featuring a Russian dancing bear act overseen by "a semi-retired dominatrix who billed herself as Ursa Major." When one of the bears developed an impacted bicuspid the Wheelers offered to fly him to a periodontic veterinarian at Lake Tahoe. Better still they decided to go along with Ursa and the bear - bad choice. The jet crashed with no survivors, leaving Joey with a cool 4 million. She moved to Florida at that time where she met her first husband, a stockbroker. The pair were happily wed for four years until a sky diver whose parachute didn't open fell on him. Joey is widowed but richer because of the settlement from the sky diving company. Next came Chaz - this lady is definitely not lucky in love. She has no idea why Chaz would try to do her in. He has one very good idea - he believes she knows that he's doctoring water samples which allows a greedy polluter to go on dumping fertilizer into the Everglades. Since Chaz is an unscrupulous maggot (an understatement) he has no choice but to render Joey speechless. He feels no remorse whatsoever, only satisfaction that is wife is dead. Problem is she's not. Joey manages to hang onto a floating bale of grass, "Sixty pounds of Jamaica's finest," until she's found by ex policeman Mick Stranahan. Well, there's just so much a woman can take. Joey's happy to be alive, but decides not to let her husband know it. With Stranahan's help she'll play dead and drive Chaz crazy. We could say, "And this is where the fun begins," but, truth is, in typical Hiaasen style we've had a great deal of fun already. From the opening paragraph to page 355 of "Skin

Published by Thriftbooks.com User , 17 years ago
Florida is a unique state. It is the number one tourist destination in the world with more theme parks and pristine beaches than just about anywhere else. However, it also is quickly being overdeveloped and if you believe Carl Hiaasen, it is due to greedy and unscrupulous individuals. However, Hiaasen makes them out to be cruel and ridiculous characters whose greed will lead to their inevitable demise. The fun for the reader is watching them self destruct. The latest Hiaasen antihero is Chaz Perrone who for no explicable reason throws his wife off an upper deck of a cruise ship in a vain attempt to kill her. His wife, Joey, survives and with the help of her rescuer and new friend, former cop and hermit Mick Stranahan, try to come up with answers while exacting their revenge. So many authors try for humor. However, in many instances they try too hard and it becomes quite forced while the plot lags. Hiaasen is the measure of what ingredients go into making the best humorous novels in the mystery genre today. The strength of his work are several. First, the plot is always interesting comically reflecting abnormal behavior in what should be routine situations. In this case taking a cruise vacation. Second, the characters are truly outrageous and unforgettable. The wackiest in this story is Troy, a very large man hired to protect Chaz. He has a bullet stuck in his buttocks which causes him severe pain requiring him to steal pain medicine in the form of adhesive Band-Aids from local nursing homes. Chaz comes in at a close second. He is incredibly self centered worried more about his potency than the well being of his wife or girlfriend. He is a marine biologist who hates marine life as well as biology. Why he does it remains the mystery. Of course it is the act of throwing his wife off the ship that begins his eventual demise. On top of all this is an ecological warning about saving the Everglades and a riveting plot occasionally interrupted by truly hilarious lunacy. Many try but nobody does funny like Carl Hiaasen.
Trustpilot
Copyright © 2022 Thriftbooks.com Terms of Use | Privacy Policy | Do Not Sell My Personal Information | Accessibility Statement
ThriftBooks® and the ThriftBooks® logo are registered trademarks of Thrift Books Global, LLC