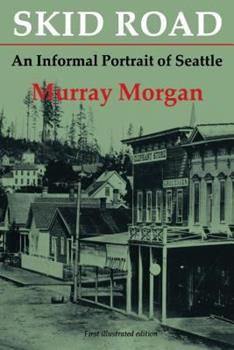 Informal and picturesque, Skid Road is the story of Seattle during its first hundred years, seen through the lives of the vigorous personalities of its settlers and early citizens. This handsomely illustrated revised edition brings Seattle's history up-to-date and provides a vivid portrayal of its past: pioneering, Indian warfare, lumber, railroads, the great fire of 1889, the Alaska gold rush, the amusement business, newspapers, the general strike...

Published by Thriftbooks.com User , 17 years ago
This is the great popular history of Seattle. Learn about the pioneers behind the downtown streetnames: Denny, Stewart, and more. Yes, there was history here before Grunge -- and it was just as earthy. The colorful stories just don't stop: the founding and abandonment of Alki (now West Seattle); the "Battle of Seattle," with the settlers hiding in a fort; Chief Sealth's myth and legacy; the Great Seattle Fire that burnt down Pioneer Square, and the landfill into the Sound that rebuilt it; how Seattle overtook Tacoma as the dominant city on Puget Sound by luring miners bound for the Yukon Gold Rush with the promise of "the best whorehouses north of San Francisco" and, of course, provisions for the trail and for prospecting; the 1909 Alaska-Yukon-Pacific Exposition on the University of Washington grounds, designed by the Olmstead Brothers (of Central Park fame); Seattle's mixed role in the anti-Chinese mob violence that swept up the Pacific coast in the 1880s; the outrageously mammoth public works projects sluicing Denny Hill flat, using the dirt for landfill on the waterfront, and creating the worlds largest island in the harbor; the Seattle General Strike of 1919 that prompted a nation-wide red scare; and more and more. It makes me breathless just to type this! A very enjoyable read, in a breezy story-telling style, Skid Road gives you more of a flavor of where Seattle came from in just a few hours than anything else.

Wonderful Read on History Of Seattle

Published by Thriftbooks.com User , 19 years ago
I just loved this book. It was required to read for a History class. I couldn't put the book down. I read it in a weekend. I learned so much about Seattle, and the wild characters that help to create and establish Seattle. I never knew such people help to built Seattle. Now I know The history behind the street names in seattle, and more about the history in Seattle that I would have never had know.I'd love to read more books that this authors has written.

before it was Yesler

Published by Thriftbooks.com User , 19 years ago
This is the consensus choice among local historians and writers for the best history of Seattle's founding, and it deserves to be. Morgan's portraits of pioneers like Doc Maynard and Arthur Denny are exhilirating and informative, and the book reads like a collection of excellent short stories rather than a dry recollection. If you are familiar with Seattle, this will change the way you look at Pioneer Square and the waterfront, but a knowledge of the city is not necessary to enjoy these stories of a city's establishment and maturation.

Published by Thriftbooks.com User , 21 years ago
Murray Morgan was obviously an historian, and it is clear from his writing that he loved the N.W. This was no, "romance" novel, but a great narritive history of the beginnings of Seattle. I found it inviting, informative, engaging and on several occasions I laughed aloud at the humor of the character and writer as well. It was a joyfully and vividly written portrayal of Seattle's first 100 years and I loved it!

The best book ever written on Seattle

Published by Thriftbooks.com User , 23 years ago
This is the very best book written on the history of Seattle. The "skid road" was a road that logs were skidded down to the Yesler mill, but later came to designate the hurdy-gurdy district which ran south from there (today's Pioneer Square district). The term "skid row" is a corruption.
Trustpilot
Copyright © 2022 Thriftbooks.com Terms of Use | Privacy Policy | Do Not Sell My Personal Information | Cookie Preferences | Accessibility Statement
ThriftBooks® and the ThriftBooks® logo are registered trademarks of Thrift Books Global, LLC