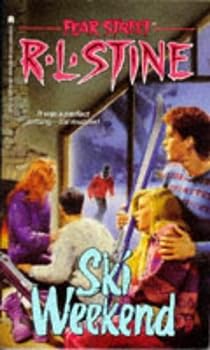 This description may be from another edition of this product. Hadde of Landomere is a huntress who has sworn to protect and provide for her people. But when the Wasting brings famine and destruction, she must leave the forest of Landomere to seek aid in the...

Published by Thriftbooks.com User , 17 years ago
This story is about kids that were playing in the snow. The main characters' names are: Ariel Munroe, Doug Mahr, and Shannon Harper, Doug's girlfriend.Ski Weekend is very scary, because the kids that were there were playing and suddenly a blizzard came. Some people even died.This is a very good book to read alone or in a group in the dark. It would be appropiate in the winter in front of the fireplace.

a very good mystery and scary too

Published by Thriftbooks.com User , 18 years ago
this book has been one of my favorite RL Stine books for a while. The book shows that you think you can trust someone but in the end you dont know who to turn to. This book also has good character development, you will feel like your right next to the characters the whole time and going through the same things that they are. i recomend this book to anyone who likes a good scary mystery

I was gripped, holding my breath the whole time

Published by Thriftbooks.com User , 23 years ago
This book was incredibly creepy, and the suspicion rose page after page. When the three teens found out what was going on, their struggle to escape was very scary. I recommend this very much for just a great suspense novel.

Full of mystery and suspense. Great for a rainy day!

Published by Thriftbooks.com User , 23 years ago
Four kids get trapped in a snow storm after spending the weekend at a ski lodge, and have to stay with total strangers. They picked up a boy named Red at the lodge, who didn't turn out to be as friendly as they thought!

This was one of the best!

Published by Thriftbooks.com User , 23 years ago
This book had such a shocking and surprising ending! I loved it. In some ways it was a little depressing when I found out that Red (a character) was in on the whole thing. He seemed so nice. But that made me draw my attention away from suspecting him. So over all it made it quite interesting.
Copyright © 2020 Thriftbooks.com Terms of Use | Privacy Policy | Do Not Sell My Personal Information | Accessibility Statement
ThriftBooks® and the ThriftBooks® logo are registered trademarks of Thrift Books Global, LLC