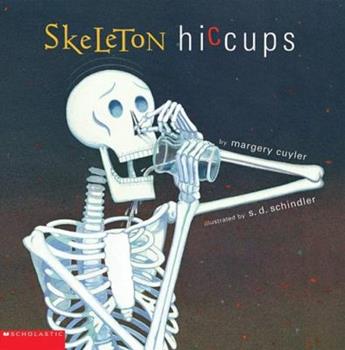 What's the best way to help a skeleton get over his hiccups? This description may be from another edition of this product.

Published by Rachael , 1 year ago
This is a simple cute story for my currently skeleton obsessed daughter. I purchased the book in "good" condition only to receive a book with rips, a loose spine, and writing on almost every page. I would have listed this as "fair" condition with damage. We can read the story, but due to the loose spine I can't give the book to my daughter to flip through because it'll get ripped apart easily.

What a fun book!

Published by Thriftbooks.com User , 18 years ago
My 2 year old loves hearing this book, & he makes the "hic" sound along with me as we read it. Fun & clever. Amusing illustrations & scenes. A great halloween or hiccup book!

My students love it!

Published by Thriftbooks.com User , 18 years ago
This story is entertaining for both adults and kids. As noted in other reviews, the skeleton character is drawn in a friendly light, non-threatening, and not scary. There is a lot of humour in this story that both adults and kids will find amusing. My students ask for this story every day, and they are getting quite proficient at reading the story using their own words (they are only ages 3-4). They also really enjoy doing the hiccups, especially acting out the jumping hiccups. This story is repetitive, funny, and many teachable moments can come out of it. A must-by!

Published by Thriftbooks.com User , 20 years ago
Skeleton wakes up one morning (the headboard of his bed is a gravestone with RIP engraved on it) and discovers that he's got a bad case of the hiccups. He starts his day off, but the hiccups aren't making things easy for him. In the shower, he looses the soap. Brushing his teeth, his jaw flies off! Polishing his bones, the hiccups cause his arm to come undone! Carving a pumpkin and raking leaves aren't easy, either, with these bone-rattling hiccups!When Skeleton goes outside to play ball with Ghost, the old remedies for curing hiccups are suggested. Skeleton eats some sugar (which falls through his jawbone and over his ribs), he drinks a glass of water standing on his head (he water gushes out of his eye sockets), and Ghost tries to scare him. Well, nothing works until Ghost gets a sneaky idea involving a mirror...The team of Cuyler and Schindler have combined to produce a wonderful and funny book in "Skeleton Hiccups." The illustrations are big and bold with vibrant colors that delight the eye. Skeleton is beautifully drawn with enough detail to see his individual bones but not so much detail that he'd be scary to young children. Ghost, too, is a character, sporting a blue baseball cap he wears backwards and a pug nose. The pages are large and uncluttered and easy to read. The text of "Skeleton Hiccups" is brief and simple, with small-font "hic! Hic! Hic!"s bouncing on each page as skeleton tries to go about his business with these pesky hiccups. When I read this book to a class of preschoolers, they really liked the hic-hic-hic part, and would repeat it every time they saw it on the page. Children who were normally a bit skittish around Halloween skeletons thought that this one was pretty funny, especially because he had troubles that they themselves have had!"Skeleton Hiccups" is perfect for Halloween time, of course, but there's no reason why it should only be read during October. I showed the book to the art teacher at our school who immediately fell in love with it-"it's sooo hard for kids to draw skeletons!" she said, "they require so much detail. But THIS Skeleton is just perfect!" She went on to say that she intends to use this book and another one called "Hobgoblin and the Skeleton" to teach about human anatomy and proportion in her art classes.For anyone who likes Halloween or a good laugh, for those of us who have a fascination with the human skeleton, this book comes highly recommended!!

Especially in keeping with the Halloween season

Published by Thriftbooks.com User , 20 years ago
A simple word text by Margery Cuyler is wonderfully illustrated by S. D. Schindler making Skeleton Hiccups a highly recommendable and spooky picture book for young readers just learning to sound out their first words. The playful theme of a skeleton plagued with hiccups and the ingenious cure his ghost friend discovers make for a thoroughly delightful tale that is especially in keeping with the Halloween season.
Trustpilot
Copyright © 2022 Thriftbooks.com Terms of Use | Privacy Policy | Do Not Sell or Share My Personal Information | Accessibility Statement
ThriftBooks® and the ThriftBooks® logo are registered trademarks of Thrift Books Global, LLC