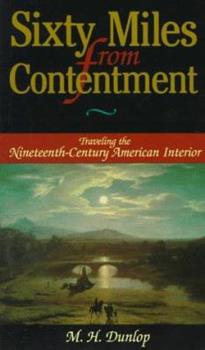 In the nineteenth century, the most interesting and exotic place on the face of the earth was the American interior--now the states of Ohio, Indiana, Illinois, Missouri, Iowa, Minnesota, Wisconsin, and Michigan. Travelers came from all over the world to report on and argue about everything they found there: the frenzied eating habits, the obsession with spitting tobacco, the hunting and child-rearing customs, the region's mysterious prehistoric past,...

Published by Thriftbooks.com User , 17 years ago
"Sixty Miles" shines light on a block of time and space relatively neglected: the American Midwest in the 19th century. Not as dramatic as the California gold rush or the Civil War, it is all the same a remarkable moment in time when people poured into the largely uninhabited interior of the continent and started a new society. M.H. Dunlop draws on dozens of travel journals to make a portrait that is unusually rich and textured. Comparing the old journals to modern tourist lit, she finds attitudes and outlooks that have survived to the present day, such as the wishful thinking for an idyllic landscape with waterfalls and scenic overlooks. Just as early travelers such as Charles Dickens and Frances Trollope found the vast unquaint landscape dispiriting and comfortless, so too are modern brochures reluctant to speak of the millions of square miles devoted to industrial agriculture. Instead, they tout a Victorian ideal of gingerbread cottages and food festivals completely separated from the production and producers of the food. If one set out today to see the Midwest in a car armed with tourist brochures, the culture shock would be similar to that suffered by 19th century Europeans who set out on a trip along the Ohio River expecting something similar to the valley of the Loire. I found the plentiful and pithy quotations of the early inhabitants to be especially evocative of the period. In describing how outsiders could not comprehend the settlers' passion for clear-cutting the landscape, Dunlop quotes a local who in turn could not understand some more recent settlers' decision to leave a few oak trees standing around their house: "Well! I should think there was oak trees enough without keeping `em in a body's dooryard!" Stage passengers who were asked by Trollope why they didn't complain directly to an innkeeper about food so bad that among themselves they said it amounted to "poisoning folks", replied that they did not complain because innkeepers couldn't "bear to be found fault with". The exploration of the eating habits of the early inhabitants forms an especially fascinating chapter: "A Table Set For Hundreds". Many travelers reported on the phenomenon wherein a dinner bell would ring in a steamship or hotel and the guests would surge to the table and wordlessly demolish huge amounts of food in a matter of ten or fifteen minutes, then just as quickly retreat from the dining area to wait for the next ringing of the bell. The American folkways puzzled foreigners much, but probably not as much as they would a 21st century American transported back to that time and place. What, for example, would today's medical professional make of the plague of tobacco spit, which was ubiquitous? "Streets, walkways, boat decks, the floors of trains and hotel lobbies, all were described by travelers as coated with brown slime. Frances Trollope claimed it to be impossible for women to protect their dresses from it..." And what would today's riverboat gambler th
Trustpilot
Copyright © 2022 Thriftbooks.com Terms of Use | Privacy Policy | Do Not Sell or Share My Personal Information | Accessibility Statement
ThriftBooks® and the ThriftBooks® logo are registered trademarks of Thrift Books Global, LLC