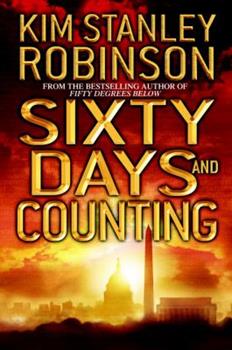 (Book #3 in the Science in the Capital Series)

In the concluding novel in a trilogy of lasting importance, award-winning author Robinson presents a world where time is running out as quickly as its natural resources, where surveillance is almost total, and the last--and most terrible--of natural disasters looms on the horizon.

Time to get serious

Published by Thriftbooks.com User , 12 years ago
I give this series 5 stars. I think of it as "scientific fiction", not science fiction. As one who has been married since the earth cooled, I think his descriptions of family life are spot-on. His affection for the outdoors is luminous and inspiring. I read a lot of serious fiction; I think the three books in the trilogy held together very well. No way are these books disappointing to a serious minded reader who thinks hard about the future of the planet, the sociology of change, or the wonders of family living.

Published by Thriftbooks.com User , 12 years ago
This is the final volume in Kim Stanley Robinson's eco-thriller trilogy, and must be read only after reading the previous two works: Forty Signs of Rain and Fifty Degrees Below. Although perhaps not entirely as edge-of-your-seat a book as its two predecessors, this conclusion to the Global Warming political alternate future envisioned by Robinson is a great read for 2009, since the title is derived from a newly-installed progressive president's platform for action within sixty days (This is Sen. Phil Chase, elected in the previous volume in the midst of a climatic catastrophe). The parallels with last year's momentous election is quasi-prophetic, but here Robinson also neatly concludes the various personal adventures of the characters introduced previously. Robinson's entire trilogy is a must-read for anyone who enjoys not only speculative fiction in a contemporary setting, but also the idea that progressive politics can make a difference in a world gone haywire.

Published by Thriftbooks.com User , 13 years ago
This is book 3, the final installation, of a series that should be read by everyone involved in making environmental policy. It's an enormously engaging story all on its own, but the timeliness of the climate change issues and the politics involved make it so important. Read this series!!!

A pleasing end to the cycle

Published by Thriftbooks.com User , 13 years ago
This book is going to going to rub some people the wrong way. More than the others in the series, it attacks current political dogma and demands a change. It does, in fact, ask why when the US government is doing so much to stabilize the economy, the world, and help people in general, why we still think that government help is bad. New Orleans needed more help, and Texas couldn't wait for the federal government. So this level of the book is going to be liked or disliked based on personal political beliefs. I think we have seen that from past reviews. However, this book like the others is only tangentially about politics. Like mant works of science fiction it is a way for to think of how out technology will effect the world and how we might preemptively prevent negative consequences. When it thought we would have robots wandering around the street, the three laws of robotics were proposed. Star Trek proposed the Prime Directive for dealing with new cultures. The list goes on. This series presupposes a traumatized world that has not happened yet, and may not happen, and proposes some alternatives. It may not be the best idea to expend government funds to pump and mine every bit of fossil fuel and burn it for energy. It may be better to spend money on Solar. The same goes for accounting methods that do include ancillary costs of acquiring that oil, such as the $1 trillion for the war in iraq. Who knows if any of this will transpire, or if any of this work? This is science fiction. Even this technological consequence thing is secondary to the real crux of the story, which is what Robinson, like so many other science fiction writers, excel in. That is people and relationships. Each character in the story is certain archtype, and each represents a specific manner of interacting with the world. Charlie is the domestic political, feeding ideas to those in charge in hopes of making a change, while at the same time knowing that family is what makes a country. Ann is the dedicated scientist, looking for a silver bullet to solve the problem. Diane is the scientist administrator who believes that world can be saved through science, a constant theme through most science fiction, and in the real world, politics is who one saves the world. Ergo, the thrust of all three books. This is why I like this book the best. In the previous books it appeared that Robinson was going to take the traditional trajectory and claim that science would allow to live at our current standard of living, or even better, and still save the world. While it is a nice fantasy, I did not think it fit in with overall tone of the book, which was more reality based. However, in this last book with the increasing focus on the refugees from Khembalung and Frank, and the freegans, it is clear that he does realize, and is trying to promote, a change in relationship to our planet. This is another reason why some may find it to be their most hated book. Even Ann, the abs

Published by Thriftbooks.com User , 14 years ago
I would have to say that Kim Stanley Robinson has done it again, in this three-book novel. He has written something that is at once very open to real and important ideas, and also very personal in its way of looking into the weaves that makes a satisfying life possible, in our world of today, and as it changes. Somehow it's not a surprise that these personal things take more center at this stage of the story; that's been hinted all along, if never explained, and now the hand that's written this has become confident in it. How indeed do we overcome the present and build the next future, except by very personal discoveries and adaptations? The pauses under certain trees for ideas are handled very well indeed, very smoothly, and showing how much thoughtful time has gone into them. It's a very personal style of writing, and with this last book, I think it comes very much into its own. KSR has always been asking and learning, and here he more than ever shares.
Copyright © 2020 Thriftbooks.com Terms of Use | Privacy Policy | Do Not Sell My Personal Information | Accessibility Statement
ThriftBooks® and the ThriftBooks® logo are registered trademarks of Thrift Books Global, LLC