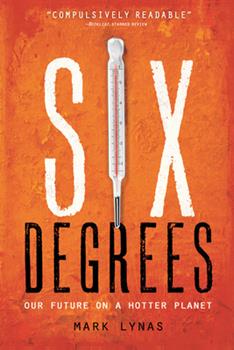 Six Degrees: Our Future on a Hotter Planet

Possibly the most graphic treatment of global warming that has yet been published, Six Degrees is what readers of Al Gore's best-selling An Inconvenient Truth or Ross Gelbspan's Boiling Point will turn to next. Written by the acclaimed author of High Tide , this highly relevant and compelling book uses accessible journalistic prose to distill what environmental scientists portend about the consequences of human pollution for the next hundred years...

breadth and depth in reporting the latest science

Published by Thriftbooks.com User , 14 years ago
I have been reading this book every night for a few minutes before falling asleep and it has been giving me incredible, apocalyptic nightmares that beat McCarthy's dark vision of the near future (see The Road (Oprah's Book Club). I've kept up with climate science since the '80s so I am no novice, but this book, along with Plan B 3.0: Mobilizing to Save Civilization, Third Edition, Eating Fossil Fuels: Oil, Food And the Coming Crisis in Agriculture, When the Rivers Run Dry: Water--The Defining Crisis of the Twenty-first Century, With Speed and Violence: Why Scientists Fear Tipping Points in Climate Change and Under a Green Sky: Global Warming, the Mass Extinctions of the Past, and What They Can Tell Us About Our Futurecombine to make me really really uneasy about having grandkids. Too late, I had a kid. Highly recommended for science minded and lay people and anyone planning on procreating, but be forewarned, there is nowhere to run (if you have not figured that out already from the constant news of freakish record-breaking disastrous weather around the globe this year). My well read cousin moved to British Columbia to escape future climate change troubles, but I fear even that region is in trouble, as you will see in the chapter on Two Degrees (see: snowpack). ~ by Lesley Thomas, author of arctic warming novel Flight of the Goose

Six Degrees, a MUST READ.

Published by Thriftbooks.com User , 14 years ago
This book packed a very powerful message which I really didn't expect. I have read a few "climate change" books and numerous articles on same, so I have some previous knowledge on this subject. Six Degrees put the issue of global warming in realistic and understandable terms. I thought maybe the author would gloss over some of the the problems that I have read other members of the scientific community reporting on, but the author brought these issues into his argument in a meaningful way. He also tells the potential problems from differing points of view, so the reader can decide what is the most likely outcome. In my opinion, this is one of the "must read" books of our time. The author even talks about the reasons we (and society in general) will probably fail to act on this issue in time, despite OBVIOUS evidence of what is happening. Just because someone denies reality, doesn't mean it isn't happening. Do yourself a favor; this book is very readable. Read it all the way through, I wager you will have a different feeling about our earth. The only other book to affect me like Six Degrees, was Kunstler's The Long Emergency. Please read it!

Science-based projections of a warmer world

Published by Thriftbooks.com User , 14 years ago
[This is a review of the English edition (June 2007). The American edition (2008) was edited by Lynas to be a bit more optimistic.] The IPCC says that in the 21st century global warming could bring temperatures anywhere from 1 to 6 degrees hotter. Lynas uses peer-reviewed scientific literature to show what these temperature rises could mean. In 6 chapters he outlines 6 degrees. Once temps get past 2 or 3 degrees, like a wild fire burning out of control, the planet could continue to heat up no matter we do because nature starts releasing massive stores of CO2 from burning forests, melting tundra, warming oceans etc.. This is the first comprehensive attempt I have seen that outlines what a warmer world could be like, relying entirely on the most recent peer reviewed scientific literature. No one can predict the future with 100% accuracy, these are not things that will happen exactly as describes, but they have already happened in the past when temperatures reached this high, therefore there is a percentage-possibility of them happening again in similar ways - not something to be discounted - in the same way we buy fire insurance or flood insurance, even if the chance of a fire or flood is very small, we know from history they do happen. Lynas' book is one part in the learning curve of global warming, it could be read in conjunction with a couple other books out of England recently, such as George Monbiot's Heat: How to Stop the Planet from Burning, which offers practical solutions to keep temps below 2 or 3 degrees, and With Speed and Violence: Why Scientists Fear Tipping Points in Climate Change, which discusses the nature of runaway tipping points and why a rise above 2 or 3 degrees is so potentially dangerous. See also the National Geographic documentary of the same name based on the book.

On the need for radical urgent action

Published by Thriftbooks.com User , 14 years ago
He certainly did his homework for this book. It was a given a very positive review on realclimatedotorg which convinced me it was worth reading. I consider myself fairly well informed on this topic but I learned a lot of useful information here. He particularly explains all the possible positive feedback mechanisms very well. Perhaps the most interesting single fact I learned was that the global temperature in the depths of the last ice-age was just 6 degrees colder than today, which makes me appreciate what a significant change we could be facing if we don't soon adopt a radically different way of life. My quibble with this work was that he skims over the 'positive' aspects of climate change, if he mentions them at all. He briefly refers to longer growing seasons and improved productivity in the higher latitudes, and doesn't at all refer to reduced mortality from warmer winters, of which Lomborg makes much of in 'Cool It' (unscientific and not recommended), and even the IPCC mentions in its 4th review. While not in any way a climate skeptic, I was left with the feeling of not being given an opportunity to make my own evaluations, and his tone seemed a little evangelical for me at times. In the long run, if society needs convincing of the need for radical action, I don't think this is the correct approach. Everyone's intelligence and discernment should be respected. But I don't want to dwell on a small error in a really well-researched and engaging work. This is a fine book, a gripping read, and I recommend it.

Published by Thriftbooks.com User , 14 years ago
Using a solid, conservative methodology, the author paints a frightening picture of the climatic changes that lie before us as Earth grows hotter from greenhouse-gas emissions. I was torn between assigning this book four stars or five. While there's nothing about this book I don't like, I didn't want to be influenced by my own conviction of the overriding importance of this topic for all of us, and have tried to grade the book purely on the basis of my reaction to it as a book. But the topic is urgent and important, and Mark Lynas has treated it effectively and with authority. His approach was to review all the published scientific literature he could find on climate modeling and paleoclimatology. His sources therefore consist exclusively of peer-reviewed scientific papers: no pop-science books, interviews, or mass-market magazine articles. He created a database of articles and organized them into categories according to the amount of warming they discussed: 1 degree Celsius, 2 degrees Celsius, and so on up to 6 degrees. The book builds up a picture of the heating Earth, each chapter notching the average temperature one degree higher. At 1 degree, for example, Lynas discusses the likely desertification of the American West. The great plains ranging east of the Rockies north to Saskatchewan are actually an ancient dune-field covered with a thin layer of soil held in place by plants. Climate models show its likely reversion to a more drought-stricken regime that has also existed in the ancient past. The result will be the death of the plants, and blowing away of the topsoil--just as happened with the Dust Bowl in Oklahoma in the 1930s. This new Dust Bowl will be much larger and more enduring--and where will all the people go? That's only one heading in the 1-degree chapter; there are nine more, including the slowing or stopping of the Gulf Stream, the melting of the Arctic icecap, and the die-off of coral reefs. Then it's on to chapter 2, with 11 headings of its own. The effects he looks at are diverse, sometimes smaller, such as the extinctions of individual species, but mostly much larger, such as the severe droughts and mass migrations we can expect when the world's mountain glaciers--source of much of our drinking-water--finally disappear, as they are rapidly doing right now. By the time we get to 6 degrees, the point is abundantly clear: we must not let this happen. At that point our planet will be ice-free, largely desert, and whipped by "hypercanes" vastly more powerful than today's strongest storms. In Lynas's personal opinion, the human species will likely survive, but it will be a small remnant, and one of only a few survivors of this great extinction event. Still relatively buried in the scientific literature are discussions of positive-feedback loops that may--indeed likely will--lie ahead: mechanisms that will accelerate warming beyond our ability to stop or control it. One such is the melting of tundra permafrost, which will lik
Trustpilot
Copyright © 2022 Thriftbooks.com Terms of Use | Privacy Policy | Do Not Sell My Personal Information | Accessibility Statement
ThriftBooks® and the ThriftBooks® logo are registered trademarks of Thrift Books Global, LLC