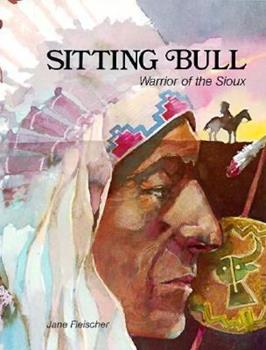 Sitting Bull: Warrior of the Sioux

A brief biography of the only Indian ever to be chief of all the Plains Sioux.

Published by Thriftbooks.com User , 14 years ago
This book for children is a fine addition to books on Native American history and biography. Beginning with the young teenager, named "Slow," as he begins his career as a warrior by counting coup against the Crow, the author offers a balanced and, at times, sympathetic perception of Sitting Bull of the Hunkpapa (Lakota) people. While this is a brief book that includes the importance of buffalo hunting and the encroachment of white settlers onto hunting lands of the Sioux Nation, it also looks at the dark history of the breaking of the 1868 Treaty of Fort Laramie and the subsequent battles at Rosebud Valley and the Little Big Horn. Lastly, the author quickly touches upon the eventual surrender of Sitting Bull at the Standing Rock Reservation, his involvement with Wild Bill's Wild West Show, the emergence of the Ghost Dance and Sitting Bull's murder. Bert Dodson's fine pen and watercolor illustrations will add interest for young readers. This book would be ideal for children to begin their studies of Native Americans and the history of relations between white Americans and Native Americans.
Trustpilot
Copyright © 2022 Thriftbooks.com Terms of Use | Privacy Policy | Do Not Sell My Personal Information | Accessibility Statement
ThriftBooks® and the ThriftBooks® logo are registered trademarks of Thrift Books Global, LLC