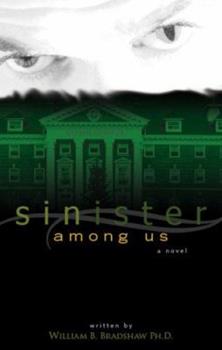 After a distinguished career as a financial turn-around specialist, Brad Green comes out of retirement to serve as interim president of a small Midwest college beset with a financial crisis. He soon comes to fear the problems are laced with sinister overtones that go well beyond financial difficulties. As "iSinister Among Us" unfolds, Brad matches wits with those in league with Satan, especially the demon-possessed mastermind unable to control his...

William Bradshaw, You Missed Your Calling!

Published by Thriftbooks.com User , 14 years ago
When Dr. Brad Green, a man who had made his career of saving financially strapped higher education institutions, had his number pulled by Cyprus College, a small religious school in Indiana, he would find that this was no ordinary turnaround job - the school had some major issues to deal with: On campus pimping of students and prostitution, drug selling, embezzlement by board members, selling grades for sexual favors, non-payment of institutional taxes... And the list goes on. As Dr. Green tried to fix the problems he faced mutinies first of the college's board of directors and then of the faculty itself. It doesn't take long for Dr. Green to begin to sense that something supernatural is at play at Cyprus College. He just can't put his finger on it! I found Sinister Among Us to be a very engrossing book. The plot moved right along and I found myself getting pulled in by how Dr. Brad Green, the book's protagonist, became a superstar problem solver. William Brashaw has indeed written a page turner. The way Bradshaw set up Cyprus College's many challenges then ingeniously solves them was well thought out and I found his background on demoniacs (people who are possessed by demons) to be very educational. Now that having been said, I will say that although I liked the two facets of the book, (how the plot unfolded and the background information on demonic possession), I sometimes felt that when the storyline moved away from what was going on around Cyprus College to explaining the history and background of demons possessing humans on earth I sometimes didn't marry the two in my head. Both were extremely interesting to me but for totally different reasons. Could it have been that William Bradshaw had two books he rolled into one? Or could it have been that the author started out with a story on demons but the rest of the plot took a life of its own? I think the latter more likely. Nevertheless I do highly recommend this book. Both the plot and subplot I believe you will find tightly written - even though they are quite different in structure. William Bradshaw was highly successful in capturing my imagination and holding it to the end. I would label this a "thinking man's book"!

Published by Thriftbooks.com User , 14 years ago
A college over run with demons - and he only thought he had to deal with a financial crisis. "Sinister Among Us", written by the only man in the United States to hold a Doctorate in Demonology, is the story of Brad Green, returning from retirement to serve a small Midwestern college. In order to get the college back on the right path, he must face off against the hordes of Satan in order to purge the school from the evil that has accumulated over the years. Highly recommended for anyone who likes their fiction with a Christian message, "Sinister Among Us" is a must for community library fiction collections catering to Christians.

Published by Thriftbooks.com User , 14 years ago
Sinister Among Us William B. Bradshaw, PH.D. Tate, 2007, $22.95 ISBN: 9781598867404 Big problems threaten to shut Cyprus College, a small Christian school in Copperville, Indiana. The accreditation board is on the verge of withdrawing its support, which is the death penalty for a school; financially the college is near bankrupt and scholarships have vanished. Other happenings involving drug trafficking has the FBI looking. With that mess on top of the recent death of the school's president, the Board of Directors seek a special person who can bring fiscal reasonability and respect to the beleaguered school. A banker on the board recommends retired sexagenarian widower Dr. Bradley Green whose reputation is saving financially troubled colleges. Eight months after accepting the position, Brad remains troubled with what he has found. Besides the money and drugs, he uncovers a prostitution ring using students and abuse by faculty. Being a rationale thinker, he struggles with one small school having all this evil assault it. He begins to wonder if the unbelievable could be happening here; a demon causing malevolent havoc. SINISTER AMONG US is a terrific tale that for much of the story line focuses on an ethical dedicated college president resolving issues that threaten the school's existence. There is a subplot involving Christian doctrine on demonology, but Dr. Bradshaw cleverly interweaves that into the college in trouble story line as a potential cause. Although there are grating moments when something passively stated is immediately reaffirmed in the active voice to emphasize a point, this is a well written fascinatingly unique contemporary tale. Readers will appreciate the ethical hero aided by his lawyer and banker (modern times) trying to save a Christian College from the mundane and perhaps something more SINISTER AMONG US. Harriet Klausner

Published by Thriftbooks.com User , 14 years ago
There is something terribly wrong at Cyprus College, a small Christian college in Copperville, Indiana. The college is in dire financial trouble, at risk of losing its accreditation, plus a number of other more sinister things are happening on campus. The Board of Directors needs to select a man of impeccable ethical and moral standards who can turn around their financial problems-and that man is Dr. Bradley Green. Brad Green is a specialist who has made a career of turning around financially burdened institutions. He agrees to come out of retirement for the challenge. And that is where the trouble really begins. Besides the financial troubles, Dr. Green discovers drugs, prostitution, excessive use of profanity, and unimaginable abuse by faculty. This is more than just bad behavior; this has a pervasive sense of true evil. Could there be a demon mastermind behind all the evil at the college? Sinister Among Us is truly a one-of-a-kind, totally engrossing tale of how evil in a small college town and on a small Christian campus can invade multiple aspects of daily life and pervert it. This book is not about people's Christian beliefs but it does contain a very frank lesson about what the Christian doctrine as well as other historical documents says about demons and demon possession. You do not have to be a Christian to find this a fascinating story, and this book does not preach or try to convert you. If you are a Christian however, you may learn more about what the Christian doctrine really says about demons than you were ever taught at your church, regardless of your denomination. But this is not a dry reading of facts as author Dr. Bradshaw has taken a likable character and placed him in a seemingly real-life situation to relate the message-and does it masterfully! I was so involved with Brad Green as he struggles to solve the mystery of what is going on, and as he faces the possibility that the root isn't something tangible, that I forgot I was reading a story as it seemed so real! Armchair Interviews says: If you like a mix of reality and possible fantasy of demons-and excellent storytelling, check this out.

Published by Thriftbooks.com User , 15 years ago
This book is fabulous. It is a fast paced that is so believable. I loved it.
Trustpilot
Copyright © 2022 Thriftbooks.com Terms of Use | Privacy Policy | Do Not Sell or Share My Personal Information | Accessibility Statement
ThriftBooks® and the ThriftBooks® logo are registered trademarks of Thrift Books Global, LLC