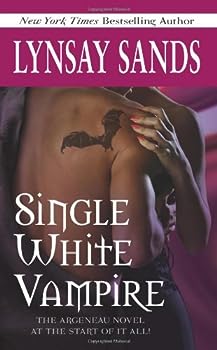 (Book #3 in the Argeneau Series)

"[Sands's] trademark humor and genuine characters...keep her series fresh and her readers hooked."--Publishers Weekly The third book in her phenomenal Argeneau vampire series, Single White Vampire by... This description may be from another edition of this product.

Lynsay sands is my favorite

Published by Thriftbooks.com User , 3 years ago
I absolutly adore the argeneau series!! Lynsay sand puts together a great story filled with romance, thrills, humorous wit, charm etc. I always find myself chuckling or biting my lip in anticipation of whats to come while i devour the stories. Absolutely recommend!!

Published by dinocrazy , 3 years ago
This was about Lucern finding his life mate with his writing. He ends up in pretty funny situations.

A New (Refreshing) Spin On A Dark Subject

Published by Thriftbooks.com User , 18 years ago
Another winner for Lynsay Sands! I'm beginning to believe that Ms. Sands can write anything she puts her mind to with outstanding (and hilarious) results. "Single White Vampire" is a wonderful and completely satirical romance filled with fun and gobs of humor. Taking dark paranormal subjects to bright new heights, Lynsay shows us what might happen to a 612 year old vampire who's simply minding his own business and trying to make a 'living', just like the rest of us poor schmucks . . . (Ahem) Well, maybe not JUST like the rest of us. Even if you don't like vampires, it's hard not to love Lucern, a brooding vampire who has wearied of his lonely existence but finds modern women far too independent and bold for his discerning . . . um, tastes. Enter Kate C. Leever, his new editor and an extremely bold creature, who has taken the biographical accounts of how some of his family members found mates and had the audacity to publish them as (EGADS!) 'paranormal romantic fiction'. With the help of Lucern's own mother, Kate finagles a reluctant 'Luc' into promoting his already wildly popular books by doing that "R.T. thing". The "thing" he inadvertantly agrees to do is attend a romance convention filled to the gills with enthusiastic romance readers just dying (pardon the pun) to meet the dark, handsome writer. Suddenly, Luc is facing an entire week of readers, writers, dinners, awards, uproariously funny masquarades, misunderstandings, and even a bit of danger. So, what's a vampire to do??? Especially when the carton with his week's supply of blood is turned away by the hotel's front desk by mistake! Why, what any vampire turned author would do . . . turn to his editor for assistance, of course! And what delicious and hilarious assistance it is! Enjoy what is to be the first in a series of light-hearted, fun-filled stories about a family of vampires searching for blood . . . Oops! Uh, I mean, love.

Published by Thriftbooks.com User , 19 years ago
Coming from a fan of Christine Feehan and her Dark series I did not think I would like this book as much as I discovered that I did! Luc and Kate are by far two of my favorite character's that I have read in recent memory. The humor that Lynsay uses in this book is laugh out loud funny. Some of the situations that she has Luc and Kate get into were so amusing that I had to re-read the sections just to make sure I did not miss anything! Wait till you read about Kate's first day at Luc's house. It's a riot!I have to say Ms. Sands sucked me into the lives of these to characters from the first page and kept me ingrossed until the last page. I was disappointed that it had to end! I hope she will continue with these great characters and the side characters that were introduced in this book because they are in a world that I would love to read about again.If you are looking for lighthearted vampire tales then this is the book for you. If you are looking for something dark then just keep shopping. But I highly recommend you give this a read you may enjoy it as much as I did!

Not your average vampire

Published by Thriftbooks.com User , 19 years ago
"Tortured, brooding, all-too serious" definitely describes the mainstream books that are out now about vampires. The constant fighting, killing, partying, I'm-so-bored vampires one might read about in Anne Rice or Laurell K Hamilton books is absent in Lynsay's fun read. It's nice to know that with this series, we're going to see a different kind of vampire. I also really liked the fact that Lynsay mentioned two of my favorite shows "Buffy the Vampire Slayer" (which is no longer on the air) and "Angel". I can't wait for the other books to come out.

Published by Thriftbooks.com User , 19 years ago
This is the first book I've read by this author & it's got everything...vampires, comedy, action, sex & relationships. Need I say more? I'll be buying more of her books.

Published by Thriftbooks.com User , 19 years ago
Lynsay absolutely rocks with her new series about a dysfunctional vampire family! I won't go into the plot line too heavy because you need to experience all the surprises and delights yourself.A mother, two sons and a daughter (and more relatives to come hopefully) face the every day struggles of vampire existence in the 21st Century. In this tale, originally called Lucern, we meet Lucern Argeneau, the first son. He is a four hundred year old vampire, getting by in the dreary world by writing contemporary romances about...well, vampires...only no one catches on he is merely writing about his family. To his surprise, they are a big success, so much so his editor, Kate C. Leever of Roundhouse Publishing is determined to drag the reclusive writer to the Romantic Times Convention.Lucern is a grumpy - albeit sexy - curmudgeon, and he is determined NOT to go to a book convention. However, Kate is a whirlwind, an editor - who has little life outside her work - so she is firmly determined to drag him kicking and screaming into the limelight. She gets aid from his family, who think Kate is not only a super editor, but also the perfect mate for Lucern. And while Lucern loves her as an editor - at a distance - he hates to admit he feels an attraction for the pushy lady.Only, romance for the vampire - as well as attending a book convention - has a lot of modern day drawbacks. Kate fits in well with his family, though she finds them a bit odd. Lynsay is known for her side-aching humour, but she is at top form as Lucern is forced into the world of sunshine and supermarkets. Being your totally civilised vamp, Lucian does not go around biting necks - let's face it, in today's situation of aids, drugs and diseases only a foolish vampire runs around taking blood without knowing the donor's lifestyle! Being a smart vampire family, they have invested in a series of blood banks, and have a steady supply delivered to them. Only Kate's presence causes Lucern to miss din-din more than once, making him so famished he considers attacking a steak in the local market.By the time Kate installs Lucern in the convention hotel, she is becoming concerned there is something very wrong with Lucern's health. From the mad escapade at the Ball for the Romance Times (with an appearance of Lady of RT herself!!) to Kate coming to terms with her popular vampire writer might just be writing biographies instead of fiction, it is typical Lynsay wit and brilliance.Lucern is sexy, deliciously grumpy and is the new wave of vampires for the 21st Century. I have always enjoyed every book Lynsay was written, but I must say she takes the gold ring with this wonderful funny book! I fell in love with Lucern, so cannot wait for the rest of the Argeneau family
Trustpilot
Copyright © 2022 Thriftbooks.com Terms of Use | Privacy Policy | Do Not Sell or Share My Personal Information | Accessibility Statement
ThriftBooks® and the ThriftBooks® logo are registered trademarks of Thrift Books Global, LLC