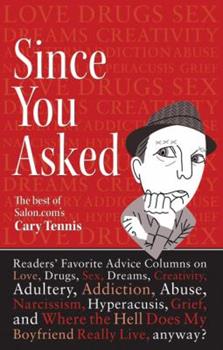 Since You Asked: The Best of Salon.com's Cary Tennis

by Cary Tennis and Salon.com

Composed of his 96 most memorable columns, this outstanding collection is a dramatic testament to the quality of writing and thought of Salon.com's Cary Tennis. For more than 6 years, Tennis has earned a name for himself as an advice-columnist extraordinaire, addressing issues like sexual rejection, marriage, and suicide with sensitivity and style. Long-term fans will be delighted to find nearly a hundred of their favourite columns -- chosen according...

Published by Thriftbooks.com User , 12 years ago
[...]. I started reading his columns a few years ago, and have read him daily ever since. Occasionally I find a letter and associated response to be less than interesting, but overall I find Cary's responses to be creative yet practical, empathetic without being syrupy sweet, and well thought through, sometimes wrapped up in a stroke of genius. People write in to Cary with problems ranging from banal to life or death, and he manages to respond uniquely and helpfully to each person whose letter is published. For a middle-aged white man, he has a point of view which is not just global, but universal. He has a way of putting things in perspective that can really shake you out of your tree, which is an amazing talent. I read this book in two days and am hungry for more. Cary, please, may I have another?

Published by Thriftbooks.com User , 12 years ago
I really like this book. I found Cary Tennis through a Roger Ebert journal blog. It referenced a Tennis column titled, "Will our words ever be heard again?" Look that particular column up if you ever find yourself in an existential funk. Buy this book for your girlfriend or boyfriend. I did. She liked it.

The Challenge of Everyday Unhappiness

Published by Thriftbooks.com User , 14 years ago
Ideally the appeal of literature should be its capacity to transport us away from our own limited views and worries, and confront us with parallel fates - which are sometimes worse, but often just different from our own. It is a proven fact that human brains get a kick out of watching, reflecting about and imagining "solutions" for trouble, even when it doesn't directly concern us. At bottom we are all social voyeurs, as can be seen in our penchant for gossip but also our love of fictional narratives. And here is a very appealing book, consisting of nothing but human trouble - and one man's attempt to provide advice, help or just consolation. Although this volume's collected advice columns hardly constitute anything resembling a novel, we can in fact read it like a rich narrative, with Cary Tennis himself as the main character, the constant voice throughout the book, reacting to the many passing voices and their problems. This must be quite a challenge for any writer: to be continually confronted with characters he has not constructed, whose fate he can hardly make out, much less control, and who expect from him some kind of guidance or even illumination (as we all expect of good literature, anyway). Come to think of it, this sounds like a postmodern plot. And does our hero/writer live up to the challenge? Undoubtedly. Each letter and reply by Tennis are well worth reading for their complexity, surprising twists and, above all, some guaranteed sparks of enlightenment. Tennis has armed himself with some of the most effective weapons known to writers. There is, first of all, common sense - a tool more difficult to handle than it may sound (usually confused with cliché) - by which I mean an instinctive understanding of the unspoken rules commanding human behaviour and interaction (whatever our individual differences), such as a keen sense of (in)justice, the value we place on status and hierarchies, our competitive mood when it comes to sexuality. In short, some conflicts cannot be avoided because they are part of human nature. By keeping this in mind, Tennis is able to distinguish between trouble which befalls us quite incidentally, and trouble which we have invited by breaking common rules. His advice therefore often "rings true", as it taps into our shared values and assumptions. Then there is Tennis's keen eye/ear for the implicit or subconscious messages of the advice seekers, whereby he tries to glean from the little they write/say the bigger implications left unspoken, which constitute the real source of trouble (our brains are more prone to confabulate/beautify/deceive than to speak out the whole painful truth). If sometimes Tennis chooses to directly confront the advice seeker with his blunt interpretation of an ambiguous letter, often he opts for symbolic communication - another tricky but valuable tool on which our most appealing mythologies and narratives are built. This allows him to address the codified messages of the letters fro

Published by Thriftbooks.com User , 14 years ago
I am not familiar with Cary Tennis's advice column on salon.com, but I thought I'd give this collection of his best columns a whirl because I love reading advice columns. You get some rather interesting letters here. There is one about a twenty-four-year-old virgin desperate to lose her virginity, one about a stepmother who is tired of her overeating and extremely talkative obese stepdaughter, another about a married man with kids in love with a prostitute, and there is one about a woman who has been dating the same guy for five years and has no idea where he lives. There is a wide variety of stories here, and they riveted me from beginning to end. I especially liked Tennis's candid and insightful answers, sprinkled with metaphors and keen observation. There is one story here that, like Tennis, I found difficult to believe, and it's the one about the man who had left a woman years ago and still hadn't gotten over her. The narrative seemed too over the top and interestingly woven, not to mention too Lifetime-movie-of-the-week-like to be real. I'm glad Tennis let him know what he thought of it. The questions I found most compelling were the ones centered on physical, verbal or any form of abuse and the ones centered on women who have a hard time trusting others. Those particular columns hit very close to home and I liked Tennis's answers to them. Since You Asked is a great collection of Cary Tennis's best columns. The one thing I would have liked to see was a table of contents. The columns are thrown in randomly throughout the book. It would have been easier to break them into categories. Other than that, I enjoyed this book.
Trustpilot
Copyright © 2022 Thriftbooks.com Terms of Use | Privacy Policy | Do Not Sell My Personal Information | Accessibility Statement
ThriftBooks® and the ThriftBooks® logo are registered trademarks of Thrift Books Global, LLC