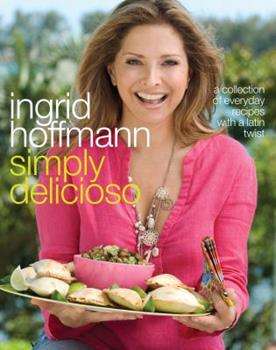 Simply Delicioso: A Collection of Everyday Recipes with a Latin Twist

From Food Network and Galavision/Univision cooking star Ingrid Hoffmann comes a fresh, vibrant cookbook full of simple recipes with a Latin twist. Using bold, bright flavors, Ingrid brings her lively, modern take on classic cuisine to the everyday kitchen, turning any meal into a fiesta. Combining ingredients you know with fresh, exciting flavors that will make your taste buds dance, Ingrid's fast and easy recipes will have you, your family, and your...

Published by Thriftbooks.com User , 14 years ago
I am not a cookbook buyer/owner. After watching many of Ingrid Hoffmans' shows, I was waiting for her cookbook to come out. I was very pleased, as well as my husband with the tasty combinations of food. Some unique combinations for the Flavor Packed Peppers were mind boggling at first: Green Olives, apples, tomatoes?!? - But WOW, now my husband and families' favorite. I will never make stuffed peppers with rice again! Some recipes are simple food prep, others a bit more work. I just simplified all of them and used the food processor for most of the recipes. Her recipes were simple enough to omit items and/or substitute items. I didn't have some of the items and improvised easily. Remember cooking is supposed to be fun. Her recipes were totally health conscious! Most seasonings for the food were vegetables and fresh/dried herbs. I was so pleased with this, I bought the cookbook for my father for Father's Day. I wrote in notes and comments about all the recipes I already tried. Wish she had another cookbook out already.

As good as I'd hoped

Published by Thriftbooks.com User , 14 years ago
I've tried three recipes from this book and all of them were good. I like the glossary in the beginning which explains what the "latin" foods and spices are. The pictures and the list of alternate names were very helpful when I went to the grocery store.

Published by Thriftbooks.com User , 14 years ago
With the extensive glossary of Latin and South American ingredients in the front, this cookbook helps rookies to the genre navigate the often-confusing litany of the core ingredients in the cuisine. Don't know a chayote from a mango? Can't tell chipotle chiles in adobo from frijoles negros? You'll learn! The recipes are simply awesome. You can create anything from hearty, simple family fare to stunning gourmet concoctions that are a lot easier than they look.

Published by Thriftbooks.com User , 14 years ago
I absolutely love Ingrid's cooking show "Simply Delicioso" on the Food Network and very excited about her latest cook book. She makes cooking fun and mouth watering with flavors from the Caribbean Islands, South America and Miami. Being half Puerto Rican myself I'm enjoying all the flavors of food I grew up with. Ingrid knows just how to take everyday ingrediants to make her recipes easy and fun for us cooks that have extremely busy schedules. I highly recommened this Latin/Caribbean Fusion cook book!

Published by Thriftbooks.com User , 14 years ago
I have been interested in Ingrid Hoffman since her cooking show - "Simply Delicioso" - premiered on Food Network. Its companion cookbook (boasting the same name) matches Hoffman's simple, albeit very flavorful, approach to cooking. I must warn consumers, however: This is NOT an authentic Latin cookbook. Nor is it trying to be! Hoffman states in her foreward that her recipes contain fusions of American, Latin American, and other cultural approaches to food. Many people have bashed Hoffman and her recipes on [...] (Food Network's site) for not being "authentic." But her goal is not authenticity! It is simply to make easily prepared, delicious food. I would recommend this cookbook to other cooks (like myself) who do not have the funds to buy an entirely new cabinet of Latin spices and ingredients. This book is most appropriate for those looking to spice up American cuisine with some different, tasty ingredients and experiment with some Latin-themed dishes. The title portrays the book perfectly: Simple and Delicious!
Trustpilot
Copyright © 2022 Thriftbooks.com Terms of Use | Privacy Policy | Do Not Sell or Share My Personal Information | Accessibility Statement
ThriftBooks® and the ThriftBooks® logo are registered trademarks of Thrift Books Global, LLC