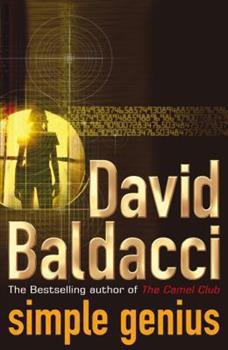 Two ex-Secret Service agents must face a dark world of violence, codes, and spies at a secret CIA training camp in this #1 New York Times bestseller about a mystery that could destroy the nation. Near... This description may be from another edition of this product.

Published by Randy Bowden , 3 years ago
A great read which lets you take a look at a big government secret installation, mostly from the outside, of course. If you like to read what is being held back from the great American public, this one is for you. While the book will not solve the problem of "secret government locations", it does use this particular location as the impenetrable "bad guy" site where the beginning of the bad news (murder) began. This is the kind of book that I would reread again years later and enjoy it just as much as the first time.

Published by Thriftbooks.com User , 15 years ago
Ingredients for an exciting read: Numbers. Codes. Secrets. CIA. FBI. DEA. Good guys--maybe. Bad guys--maybe. Add a dash of intrigue, drama and a smattering of sexual tease. Blend former Secret Service agents Sean King and Michelle Maxwell. Serve with crisp writing and expectation. Results: another David Baldacci thriller. Simple Genius is at times a scary book. Getting deeper into to the story--actually being drawn into it--one might wonder just how much goes on with the secret doings of government. At the beginning, there are two stories being told. Michelle is going through some serious personal issues that push her to the brink of self destruction. Her partner, Sean, arranges to have her cared for. This includes voluntarily admitting herself to a special care facility--we don't want to call it a nut house, although she might. While there, she busts a drug operation. Finally tiring of being analyzed and dealing with psychobabble, she checks herself out to help Sean who needs all the help he can get. A scientist from a super secret clandestine laboratory has been found dead on an equally sensitive CIA installation across the river. Sean is sent to investigate what is called a suicide. It isn't long before he is involved with mathematicians, physicists, spies and field agents in battle gear. A brilliant young girl is turned into a human code desperately trying to give clues to her father's death in the only way she knows: numbers. Trying to solve the crime opens doors on things long hidden and unknown. Early on, Sean's investigation is complicated because of his concern about partner and friend Michelle who is dealing with her own childhood demons after almost fulfilling a death wish. As the story unfolds, Sean--later joined by Michelle--soon becomes mired into a world unfamiliar to him. Inhabitants of Babbage Town are all geniuses who live, work and talk numbers, codes and quantum computers. Across the York River are the spooks. Camp Peary Naval Reservation is a highly secure CIA installation where unscheduled darkened big jets land in the late hours. This is where one of the Babbage Town geniuses is found dead. Sean King and Michelle Maxwell carry out the plot with agility and enough action to keep any Baldacci fan turning pages. Baldacci's writing style is fast paced and Simple Genius is another example of that style. At the same time, he deftly weaves intrigue and suspected (suspected?) government shenanigans. At any moment, one might expect the Camel Club--Baldacci's ex-operative characters who appear again in a soon-to-be-released new novel--to pop into the scene. A lawyer, David Baldacci succeeds in writing stories outside his profession. This makes for a refreshing and entertaining read. Caution: Don't read the Author's Note at the end of the book before you read the novel. If you do, you'll have Sean King, Michelle Maxwell and the Camel Club boys knocking at your door.

Published by Thriftbooks.com User , 15 years ago
I'm going to go against the norm of recent review here, and say I loved this book. I really had trouble putting it down. During the first part of the book, the Michelle/Horatio storyline worked better for me than the Babbage Town/Camp Peary storyline set-up. Once the storylines merged, the book really became a page-turner. I even continued reading in the middle of a sleepless night, something I never do. I've always like the characters of Sean and Michelle. I found Michelle's backstory compelling. The characters have a unique bond that is outside of sexual chemistry which is the norm for male/female pairings. The plot was far-fetched, but somehow it worked for me. I don't always look for realism in novels as long as the basic premise is believable on some level.

Great Thriller From a Tier-one Author

Published by Thriftbooks.com User , 15 years ago
David Baldacci continues to amaze me with his consistent masterful storytelling ability. Simple Genius is another smash hit for him. Today's Washington Post pegged SG just right by putting it in the Number One spot on its bestseller list. I liked DB's use of timely topics (covert CIA activity (BTW I've been to "The Farm" inside the wire), supercomputer research, and encryption code-breaking) coupled with murders in a high-stakes end game. DB is a master storyteller and is tier-one of a select few in the thriller department. His style of short chapters, sharp crisp writing, unexpected plot twists, and interesting characters kept the action flowing and me turning the pages late at night. A good book should educate and give enjoyment...and SG does just that! I give SG five well-deserved stars and can't wait for the next book featuring DB's A Team---Michelle Maxwell & Sean King, the ex-Secret Service Agents. Bravo, DB---keep them coming!

Published by Thriftbooks.com User , 15 years ago
If you love books about secret codes, Simple Genius will be a book you'll long treasure. If you like thrillers that teem with action, sex scenes, obscure martial arts, and high-tech weaponry, this book will seem like a yawn. As Mr. Baldacci warns you, don't read the Author's Note until after you finish the book. But don't miss that note if you read and like the book. It's a marvelous look into how the story was constructed. What I found most delightful about Simple Genius was that the plot development kept surprising me. Sure, the general outlines are foreshadowed intentionally (so that you don't get lost in the maze of details), but the specifics shift unexpectedly. In fact, midway through the book, I literally jumped out of my chair with surprise when one change occurred involving the medical examiner. Simple Genius is intellectually dense. You'll be exposed to more psychology, code breaking, quantum computers, and history than you would normally find in 20 thrillers combined. To Mr. Baldacci's credit, he keeps it as simple as possible without insulting your intelligence. As the book opens, former Secret Service agents turned PIs, Sean King and Michelle Maxwell have hit bottom. They don't have any work, and Michelle picks a potentially lethal fight with the toughest guy she can find in the roughest bar in town. It takes the last of Sean's money, but he persuades Michelle to seek psychiatric help from an old friend, Dr. Horatio Barnes. Barnes quickly concludes that Michelle is punishing herself, but for what? Desperate to keep Michelle in treatment, Sean calls his former love and begs for a job. He gets the job, on the condition that Michelle is kept away. Sean is to find out why Monk Turing, a scientist, appears to have committed suicide inside the CIA's highly classified facility informally referred to as the Farm. The scientist had worked at a very secretive installation cross the river from the Farm. No one wants to tell Sean anything. He cannot even find out who his clients are. Sean's heart is deeply touched by Viggie, the 11-year-old daughter of the scientist, a mathematical genius whose emotional and social development is retarded. Sean finds he cannot make much progress until Michelle releases herself from the mental hospital. But can either of them count on her mental stability? Michelle finds herself in the unexpected nurturing role for Viggie. Michelle is by far the most interesting character in the book. She's super human physically and intensely flawed psychologically at the same time, reminding me of the myth of Achilles. I found in her a metaphor for the modern world with its ability to do increasingly great things materially while becoming ever more spiritually and psychologically barren. In addition to enjoying the thriller, you'll find this book will also leave you with lots of food for thought. Enjoy!
Trustpilot
Copyright © 2022 Thriftbooks.com Terms of Use | Privacy Policy | Do Not Sell or Share My Personal Information | Accessibility Statement
ThriftBooks® and the ThriftBooks® logo are registered trademarks of Thrift Books Global, LLC