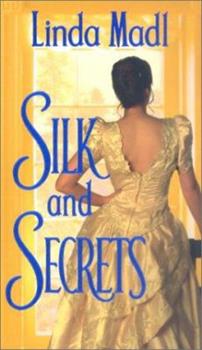 Published by Thriftbooks.com User , 17 years ago
Silk and Secrets is an intriguing romance, full of mystery and surprises. It has an excellent plot and very good characters . In fact, this romance was very impressive!!!! I highly recommend you to read it - It is a page-turner !!! Actually I didn't read the book in english, I've read a copy in Portuguese (this book was translated).

Another "Keeper" from Linda Madl

Published by Thriftbooks.com User , 18 years ago
Alyssa Lockhart blames no one but herself for the predicament she's in. Banished in disgrace from her home in America to that of distant relatives across the Atlantic, she is forced to make the best of her situation. And she'll do just that in spite of the rumors that her guardian, Lord Harris Penridge, is a murderer. Could the rumors be true? Alyssa thinks he most certainly looks the part--dark, cold, and forbidding. Yet as the days pass, she begins to see another side of him, one that is warm and understanding, and yes, loving. There is nothing dark or cold in the way he holds her, touches her. If only she could decide which is the real Harris. After all, her very life may depend on it.Harris had never gotten along well with his cousin, Alistair. Everyone knows that. However, it doesn't mean he's up to the task of murder. Rumor has it that he's done this foul deed to stake claim to his cousin's title and money, all the while comforting the beautiful grieving widow. Other rumors say he'll pay for what he's done and that justice will be served. So, isn't there enough turmoil in the manor right now without being saddled with the guardianship of an innocent young woman? Graciousness demands that his family accept Alyssa, and Harris will do everything in his power to keep her safe from the chaos that surrounds them. But being her guardian is the last thing Harris can bring to mind whenever Alyssa is near. She has the power to make him forget the turmoil, the gloom, the dark rumors that shroud his life like a pall. She has the power to make him forget his job is to protect her, not compromise her virtue.The character motivation and conflict are immediate in this story, the opening lines setting the tone for this perfect blend of passion, mystery, and suspense set in 1885 England. And what a delicious hero! This is going on my keeper shelf.
Copyright © 2020 Thriftbooks.com Terms of Use | Privacy Policy | Do Not Sell My Personal Information | Accessibility Statement
ThriftBooks® and the ThriftBooks® logo are registered trademarks of Thrift Books Global, LLC