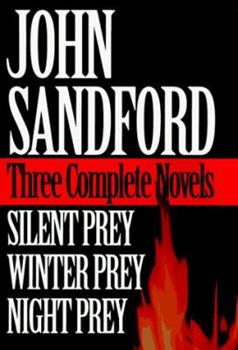 (Part of the Lucas Davenport Series)

This description may be from another edition of this product. Contains Silent Prey, Winter Prey, and Night Prey, three fast-paced, hard-boiled thrillers in the popular Prey series featuring Lucas Davenport and an array of potential victims, unexpected twists,...

Fourth. Fifth and Sixth in the Prey series

Published by Thriftbooks.com User , 20 years ago
Silent Prey - I rated this book 3 stars. Lucas Davenport travels to New York to help capture the escapes murderer from Eyes of Prey (third in the series) and to help former a love interest weed out vigilante cops from the NYPD. This effort falls a little short in comparison to the other Prey novels, but it is very entertaining. And, yes, Lucas hooks up with another woman in this book too. Maybe he is irresistible.Winter Prey - In his fifth Prey book, some local cops from a small community call upon Lucas Davenport to help solve the murder of a young couple. What he finds is a new love interest, in the form of an attractive medical examiner, and a ring of child molesters. Like Eyes of Prey, this book also has a suprise revelation that keeps you guessing until the end. I rated this book 4 stars.Night Prey - I rated this book 5 stars. Lucas davenport finds his way back onto the Minneapolis police force as a political appointee. Now he has to team with a dying investigator from the BCA to catch a serial killer, who has escalated from one murder per year to a virtual killing spree. This book is also fulfilling if you have read the other Prey books, because Lucas' love life starts to stabilize, and we see him grow as a man in love.Read these books, and keep reading the Prey series.

Suspense filled and hard to put down!

Published by Thriftbooks.com User , 22 years ago
I have all the prey series and continue to be impressed with the details of Sandford's writing and scene-settings. Lucas Davenport is the best loved character I've encountered in any book! Is it possible to get the fourth book of the prey series in hardcover? I look forward to the next one!

Published by Thriftbooks.com User , 22 years ago
Lucas Davenport is the hero for the 90's - and well into the next century!And now for a public service message:Want to feel safe tonight, don't make Lucas Davenport mad at you.

Published by Thriftbooks.com User , 22 years ago
Hi, I just started to read Mr. Sandford's Prey Series for the last 2 weeks, so far I have read 2 (Silent Prey and Winter Prey -- thanks to our City Library here) and I'm reading Sudden Prey. I cannot stop reading this book. Now I saw a new book of his (Certain Prey) and I am so excited to get it! I have to start from the beginning so I will have a set of these series. Mr. Sandford, you are now one of my favorite authors. Please continue and more power to you! You're the best...!

Published by Thriftbooks.com User , 24 years ago
John Sandford is one of the best in the thriller genre. These books will scare the pants off you
Copyright © 2020 Thriftbooks.com Terms of Use | Privacy Policy | Do Not Sell My Personal Information | Accessibility Statement
ThriftBooks® and the ThriftBooks® logo are registered trademarks of Thrift Books Global, LLC