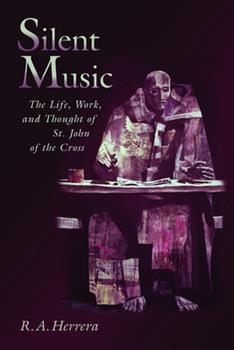 Silent Music: The Life, Work, and Thought of St. John of the Cross

by Robert A. Herrera

St. John of the Cross has long inspired Christians seeking a deeper knowledge of God. This sixteenth-century Spanish mystic left a record of personal faith as profound as any ever recorded. In Silent Music R. A. Herrera looks anew at the life and writings of St. John of the Cross and explores his continuing relevance to contemporary spirituality. Beginning with an erudite historical essay on the phenomenon of mysticism, Silent Music chronicles St...

Published by Thriftbooks.com User , 18 years ago
St. John of the Cross, along with his mentor, St. Teresa of Avila, is regarded by many as the greatest mystic produced by the Catholic Church. His writings are timeless, touching the same strings of the 20th century soul as they did the 16th or 19th century soul. However, unlike St. Teresa, who seems to be in the throes of a serious revival, little is known of this fascinating thinker beyond his published writings. Robert Herrera performs a worthy service for all those interested in the Spanish mystic. Herrera provides the reader with a solid look into his life and times, finishing up with an analysis of his writings. For those who have not yet gotten around to reading St. John, this is a useful introduction. For those familiar with the Saint's writings, this slim volume is a valuable companion.
Trustpilot
Copyright © 2022 Thriftbooks.com Terms of Use | Privacy Policy | Do Not Sell or Share My Personal Information | Accessibility Statement
ThriftBooks® and the ThriftBooks® logo are registered trademarks of Thrift Books Global, LLC