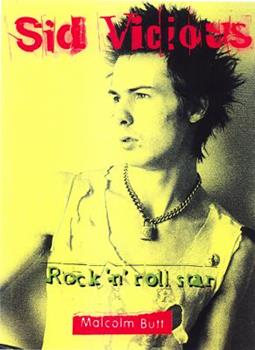 Sid Vicious, most controversial member of the Sex Pistols did not survive to see them reform in 2002. He was the epitome of punk rock, brash, abusive, a hopeless heroin addict. His brief 21 years became a metaphor for all that was rotten in rock, culminating in his lethal overdose as he contemplated a life sentence for the murder of his girlfriend, Nancy Spungen. Controversial and compelling, SID VICIOUS: Rock'n'Roll Star documents the rise and fall...

Published by Thriftbooks.com User , 15 years ago
For photographs of Sid, this book is great. All pictures are in black and white. The writing is good as well, peering back to young John Beverly, and his care by drug addicted mother.

Published by Thriftbooks.com User , 16 years ago
Malcolm Butt's SID VICIOUS: ROCK N ROLL STAR is an important read for any who are familiar with Sid Vicious and know about his sensational, controversial background. Unlike other reports and surveys, Malcolm Butt's account comes from an insider's standpoint and reveals Vicious' childhood, his introduction to the Pistols, and his declines in a world of mental illness and heroin. A strong background knowledge of the punk scene in general, not just the Sex Pistols and Sid Vicious in particular, lends a well-rounded touch to the biography of Sid's 21 years of life. Add candid black and white photos of the group and its leader and insights into Sid's mental state and you have an authoritative coverage which is required reading for any who would understand the roots and sentiments of punk rock.

Published by Thriftbooks.com User , 21 years ago
This book is awesome. The pictures itself tells the amazing story of Sid's short life. You find out the whole story from begining to his unfortunante end. The story is very moving and I have not seen a better story written about Sid Vicious.

Published by Thriftbooks.com User , 22 years ago
How much more can be said about Sid Vicious, the Sex Pistols, and 70s punk in general? Well, it helps if you've got stories nobody's heard before, and "Sid Vicious: Rock'n'Roll Star" (God, I hope there's some irony intended in that subtitle) has them. I won't reveal them here, but I will say I've been a punk fan for a long time (I'm not telling!) and I learned a lot here--lots of little details really make Sid come alive in a new way. Sure, he was nasty and brutish, and his life was short, but he's still entertaining. There are also fantastic pictures, again, many which I was unfamiliar with. There's a funny one of him in the hospital after the break-up of the Pistols, and lots of good ones before he ever joined the band.This book covers his whole life--his childhood with his drug-friendly mother, his teen years as an art student (but then, name me one British rock star that DIDN'T go to art school!)--and the hellish descent his life took after January 14, 1978. It's all here--great writing (the bibliography includes "England's Dreaming" and "12 Days on the Road"), hilarious and chilling anecdotes, unparalleled photos, and good research. However, it did leave out a really cool fact--that Sid got his trademark padlock necklace from Chrissie Hynde. But it does reveal that the one Gary Oldman wore in "Sid & Nancy" was, in fact, that very one.This slim book doesn't look like much at first glance, but appearances deceive. Avoid at all costs, however, the much more hyped "El Sid" by David Dalton--a wretched, exploitative, cheap and poorly written work with no photos and imaginary diary entries from Sid. CRRRAAPPP!PS: "Sid Vicious: Rock'n'Roll Star" would make an EXCELLENT gift for that bratty 14-year-old nephew of yours who thinks Rancid and Green Day and Blink 182 are "punk rock"--show him the guy who walked it like he talked it, and paid the highest price for it."Regrets... I've had a few... But then again, too few to mention......"

Impressive, Serious Look At A Sadly Short Stint of Fame

Published by Thriftbooks.com User , 23 years ago
Malcolm Butt writes a compelling biography of heroin casualty and punk rock legend, Sid Vicious. Mr. Butt addresses every aspect of Sid's troubled childhood, pre-heroin adolescence, and short-lived fame. He probes into issues involving Sid's relationships with his mother, fellow drug addict Anne Beverly, and his self-destructive girlfriend, Nancy Spungen with great detail. Includes epilogue describing Anne Beverly's apparent suicide days after the book was completed. A page turner that I could not put down.
Trustpilot
Copyright © 2022 Thriftbooks.com Terms of Use | Privacy Policy | Do Not Sell or Share My Personal Information | Accessibility Statement
ThriftBooks® and the ThriftBooks® logo are registered trademarks of Thrift Books Global, LLC